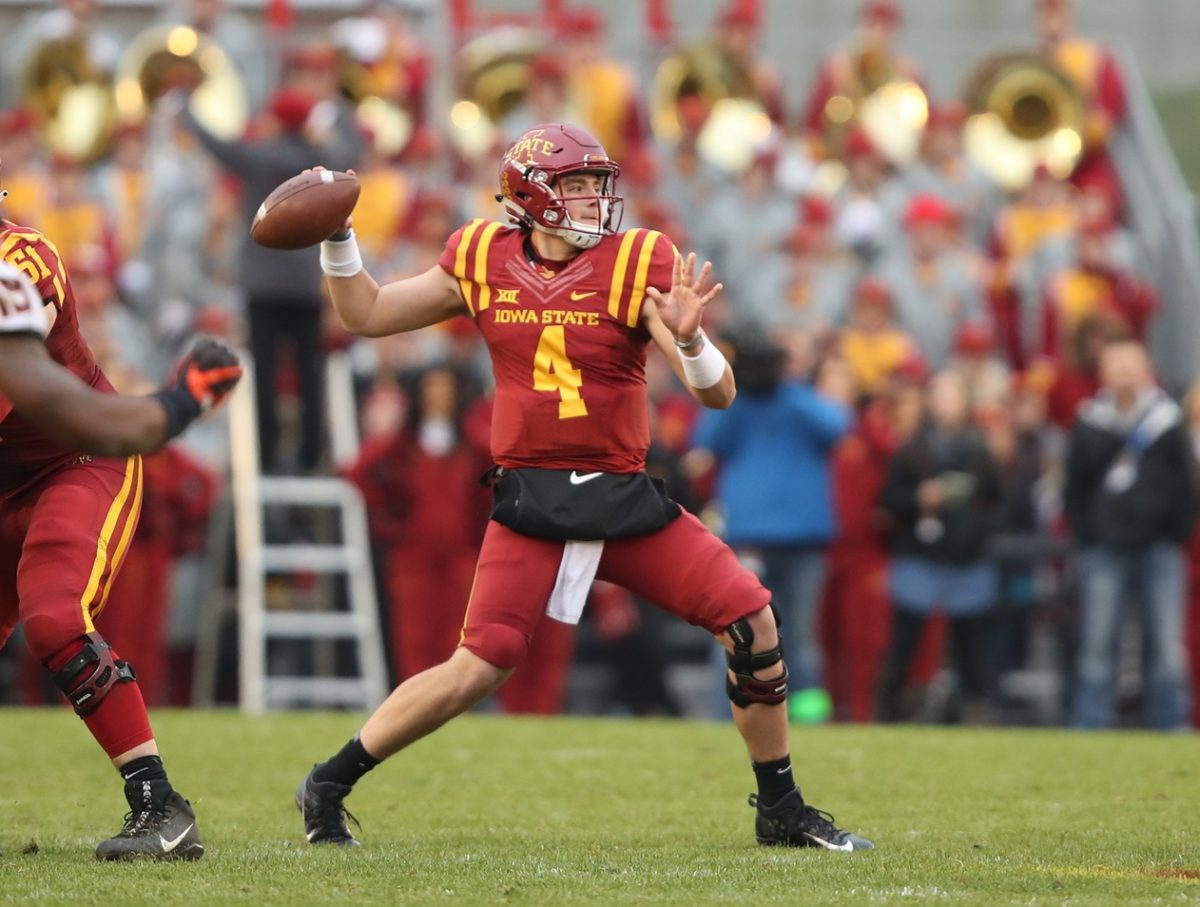 AMES — Zeb Noland’s most at peace with a fishing rod in his hand, or a bow tucked alongside as he scans the woods from a tree stand.

His phone — and all its buzzes, chimes and incessant alerts — remains in his truck.

All Noland focuses his keen attention on is his would-be quarry, but this fall and winter, he’s increasingly busy targeting touchdowns, not waterfowl, or trophy-sized deer.

“I love to go hunting and fishing,” said Noland, who could make his first career start in Saturday’s 1:30 p.m. Big 12 game at Baylor. “I wish I had more time to go hunt right now.”

Kinda. Sorta. Not really — for now.

Different outdoor pursuits have burst to the forefront for Noland, who saw his first meaningful game action in last weekend’s 49-42 loss to No. 10 Oklahoma State.

The strong-armed Georgian replaced banged-up, fifth-year senior walk-on Kyle Kempt late in the first half against the Cowboys, but Kempt practiced this week and could return to the starting slot while battling shoulder pain.

“I think right now, it looks like (Kempt will) be available,” Cyclones coach Matt Campbell told reporters Wednesday after practice. “Will he be full strength on Saturday? I think that’s the biggest question mark for us.”

Noland and Kempt are road trip roommates. Noland’s personality borders on fiery. Kempt’s mirrors that of a zen master. Somehow, the pair of mismatched former backups have become fast friends — and Kempt’s tranquil approach to a high-pressure position is rubbing off on Noland.

“I just sat back and watched Kyle, and Kyle is about as emotionless as they come,” said Noland, who completed 17 of 28 passes for 263 yards in the Okie State loss. “So watching him, it really helped me, because he had a ton of success staying as calm as he did and just staying as even-keel as he could because he would peak and his performance kept peaking, but his emotions stayed at the plateau. So that’s really what I took away from Kyle as much as anything, was just always being even-keel no matter what happens, good or bad.”

Noland’s ability to zip passes into tight windows stands out as his chief attribute. He — or Kempt, and possibly both, Campbell said — will be trying to pick apart a Bears defense that has snagged just three interceptions this season, and ranks last in the league in yards allowed per game (465.2).

A Cyclones win would push their tally to seven on the season and five in conference play. No other team in program history has won more Big 12 games than that in a season.

So there’s lots on the line Saturday, as always.

Noland’s been waiting a long time for his big moment to come, though, so the details stand in sharp relief amid the hazier, broader picture — just as they did while he rehabbed a torn left ACL last season.

“I knew that I just had to keep getting better,” Noland said of overcoming the injury. “To better myself and to better the other guys by putting pressure on them to get better every single day. Because if I just stood there, and stood on the sideline with my hand behind my back and didn’t take it serious — like my opportunity could come at any point, I wouldn’t have been as prepared.”

“You have the right guys,” ISU passing game coordinator Jim Hofher said. “That’s as big a challenge as anything. You have the right guys that are going to be in your locker room and on your practice field and, you know, no one has any idea how much time both Zeb and Kyle worked over the summer, even though coming into the fall they weren’t the starting quarterback. How much they worked together, with the rest of the team, individually — whenever they had their own free time; nobody knows that. But these guys know. That’s part of the recipe.”

So is discipline and strategic planning.

Noland said less than 20 days elapsed between his commitment to ISU and his early enrollment last January. That, he added, had been the plan since his junior year of high school when he met with a counselor and devised the perfect schedule to ensure its feasibility.

Then the injury hit in spring ball. So instead of traveling with the team last season, he hit a series of “peaks and plateaus” while rehabbing his knee. He also endured three different surgeries because his meniscus needed extra attention.

“It was up and down everywhere,” said Noland, who often went hunting on weekends he couldn’t travel with his teammates. “It was a long process. Like I said on Saturday, I had three different surgeries because of my, you know, some complications, but it really just helped me, because every time I thought I was — like coach Hof said, ‘You peak and you plateau, you peak and you plateau.’ So every plateau was a challenge. It wasn’t just like I was doing the same thing. I was always hitting adversity and I’m better now than I ever was in my opinion in both legs because my right leg had to overcompensate for my left for a year. And then my left had finally caught up to my right.”

Battling physical pain helped Noland reach a serene point previously only achieved while shouldering a bow, or casting a line.

Overcoming it — and working alongside the calm, but driven Kempt — has put him in a position to run ISU’s potent offense, as long as he manages emotions in games as well as he methodically tracks down other game in the offseason.

“I think if you look at our history, we’re a very quarterback-driven offense and you can look at the seven years I was at Toledo to even our two years here,” Campbell said. “If you can do just that, you’re going to have a lot of success.  I think we’ve always been able to put pieces around those quarterbacks that give you a matchup that usually is to your benefit. Then it’s a matter of being able to consistently and accurately distribute the ball in those matchup situations. I think when we’re playing our best football, our quarterback is a great distributor first and foremost and I think the neat thing about Zeb (is) some of those throws that are over 20 yards are some ‘wow’ throws in some really tight windows.

“That part’s really fun to watch because I think that’s what we all saw of Zeb, you know, before he got hurt in spring practice a year ago. That ability to do those things a year ago was certainly there. It’s a sense of, now, maturity. And it’s easy to say, that’s hard to do. You put a young guy in a lot of these situations, but you don’t know until they get thrown into the fire and they have to execute. It was great to see him build some confidence and have that confidence in his bank to be able to say, ‘I can go distribute the football against a really good defense in a really meaningful environment and can I just grow from that?’”