AMES – A new era of Iowa State wrestling officially kicked off on Sunday as the Cyclones took on Drexel in Hilton Coliseum with the heavily discussed crowd curtain gone for the first time in years.

There is a lot of room for this team to grow. Iowa State fell to Drexel in a narrow, 21-16 loss.

“It’s the first match of the season,” Dresser said. “To me, everything last week and this week was an evaluation.”

Dresser acknowledged that at this point, he still doesn’t know too much about his team. He is still scoping out how everyone did and how the lineup might  look going forward.

“The honeymoon is over”

Most coaches have a key phrase that they like to reiterate and Dresser has been consistent to remind us of one over the last two weeks: “The honeymoon is over.”

“It’s really how you come back tomorrow and how you respond to losing,” Dresser said.

Sam Colbray, a redshirt freshmen at 197, was pinned  in 2:06 against redshirt junior, Stephen Loiseau in his Hilton debut.

“I know Sam Colbray has a lot of ability,” said Dresser.

Colbray got caught in a hold and was unable to escape it.

“You can complain afterwords and say, ‘wow I got caught in a hold and got pinned’ or  you could’ve fought out of there,” said Dresser.

Dresser’s expectations are clear: Put in the work and good things will happen. Inconsistencies still broke through in some of the matches and Dresser wasn’t afraid to call it out for what it is after the dual.

“I think there’s some places we’re exciting and then there’s other places we need to step-up or find another guy,” said Dresser.

Gavin DeWitt, who looked to be headed towards a sudden victory, lost against Trevor Elfvin after being taken down in overtime.

The dual’s attendance was 3,133 and the energy inside of Hilton was off the charts.

“I loved it and I thought it was good,” Dresser said. “If you can get a couple guys that really get it done and get everybody excited it’s worth the trip to Hilton Coliseum and I feel like we have some guys right now that are worth the trip.”

The dual started at 184 with Dane Pestano, who faced off Owen Brooks – a match that had people on their feet. Pestano had six takedowns and won by major decision, 14-6. Pestano notched 1:36 of riding time in the third period.

“The first minute or so I was kinda nervous but after the first takedown I got into my groove,” said Pestano. “In the third period, I felt him not really give up but he wasn’t fighting as much so I felt like I could let go of my offense a little more.”

Kanen Storr, a redshirt freshmen, made his Iowa State debut against Julian Flores at 141. Storr started the two first periods working strategy getting opponent tired and getting on top as much as he could. He had nine takedowns overall and five of them came in the third period where he used the catch and release strategy. Storr won by tech fall, 22-7.

“He’s fun to watch isn’t he? He’s a guy with high energy,” said Dresser on Storr.

Ian Parker had the crowd screaming during his match against Austin DeSanto. He looked great physically and walked away with a 7-5 win over Drexel’s best guy.

“Those guys get it pretty much year round in the practice room in terms of their approach to wrestling,” said Dresser on Storr and Parker.

Marcus Harrington’s success followed him from last week to this one. He had a major decision win of 12-2. He stayed consistent and looked strong in the third period after receiving a stall warning in the second. He had three takedowns alone in the third period.

Jakob Allison, a redshirt freshmen, lost 5-0 but his drive was evident and he left it all on the mat. He was a scrappy wrestler and he worked hard to gain some  riding time and keep his opponent down.

“Hopefully some of the other guys watch and appreciate his effort,” said Dresser.

Coach Dresser said he has been pleased with Allison’s performance so far and just wants him to keep showing up to practice and putting in the work to see how much he can grow.

“If we would’ve had some of that fight in other places, I would be undefeated in my coaching career over 0-1,” said Dresser. 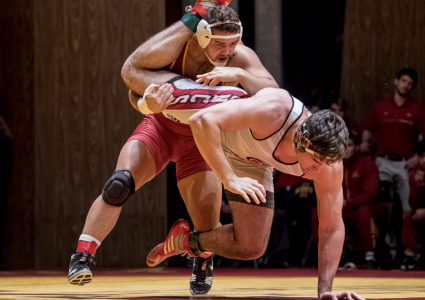