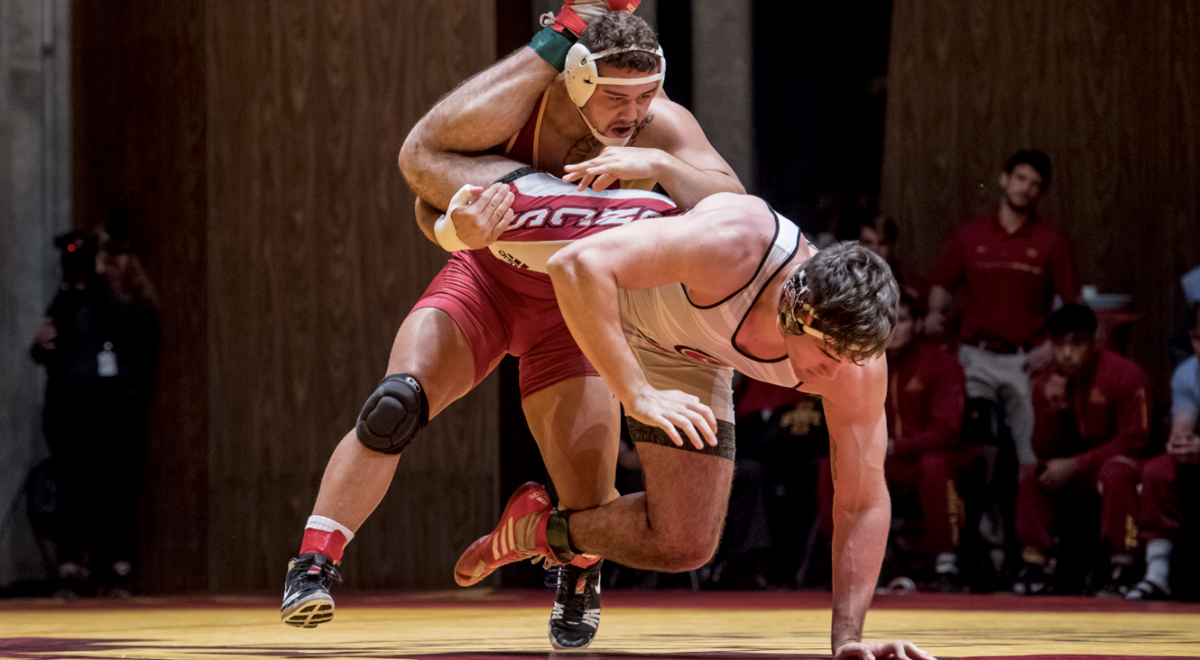 AMES — For the first time ever wrestling at Stephens Auditorium, Iowa State took the mats on Sunday. The excitement was high, the crowd was great and spotlights beautifully illuminated the state. Unfortunately, Iowa State’s new-look wrestling program fell short to No. 22 Rider, 22-15.

The dual began at heavyweight with redshirt junior Marcus Harrington, who faced off against Ryan Cloud. Harrington has been one of the most consistent wrestlers in the program during the young season. Things picked up in the second period when Harrington got his first takedown. Harrington had over 1:29 of riding time and two takedowns in the match.

“How cool to have a heavyweight who can wrestle like a 125-pounder and that’s what he can do?” Dresser commentated afterwards.

In his home opener, redshirt freshmen Jarrett Degen (149) beat his opponent by an 8-3 decision. Degen showed just how much he can overpower his opponent by gaining 2:47 of riding time after gaining a reversal in the third period.

Kanen Storr had a rocky start in the first period that went scoreless against Tyson Dippery. Neither grappler made a complete move but once the second period kicked off, Storr got three takedowns. Going into the third period, Storr began on bottom and had a reversal words can’t give justice to. That reversal had the auditorium on its feet. After two more takedowns and a minute of riding time, Storr won by 11-6 decision.

“Storr and 149 are probably the best two competitors on our team right now,” said Dresser.

Ian Parker was pinned within the first period, which was completely unexpected.

“He just got in a bad spot,” said Dresser. “Parker is the kind of guy who will go back to the drawing board. We know Ian will put the work in.”

Chase Straw faced B.J. Clagon in what resulted in a 13-11 decision loss that probably was the most heated match up of the day. It was followed up with extremely high emotions from coaches and fans.

“I felt like we gave them too much respect. Our effort was good but we made some technical mistakes,” said Dresser. “We just weren’t very smart in that match.”

The Cyclones seem to have shown a consistent pattern in the way these losses have come about. Guys will make moves but not complete the, and give away major points.

Dresser expressed his hope to stay hopeful even, if sometimes he can’t hide his dislike in losing.

“The great ones figure out how to separate themselves at the end of the matches,” Dresser said.

Up next for the Cyclones is a trip to Las Vegas for the Cliff Keen Las Vegas Invitational on Dec. 1 and 2.

WRESTLING: Setting the tone for Sunday’s dual vs. Rider