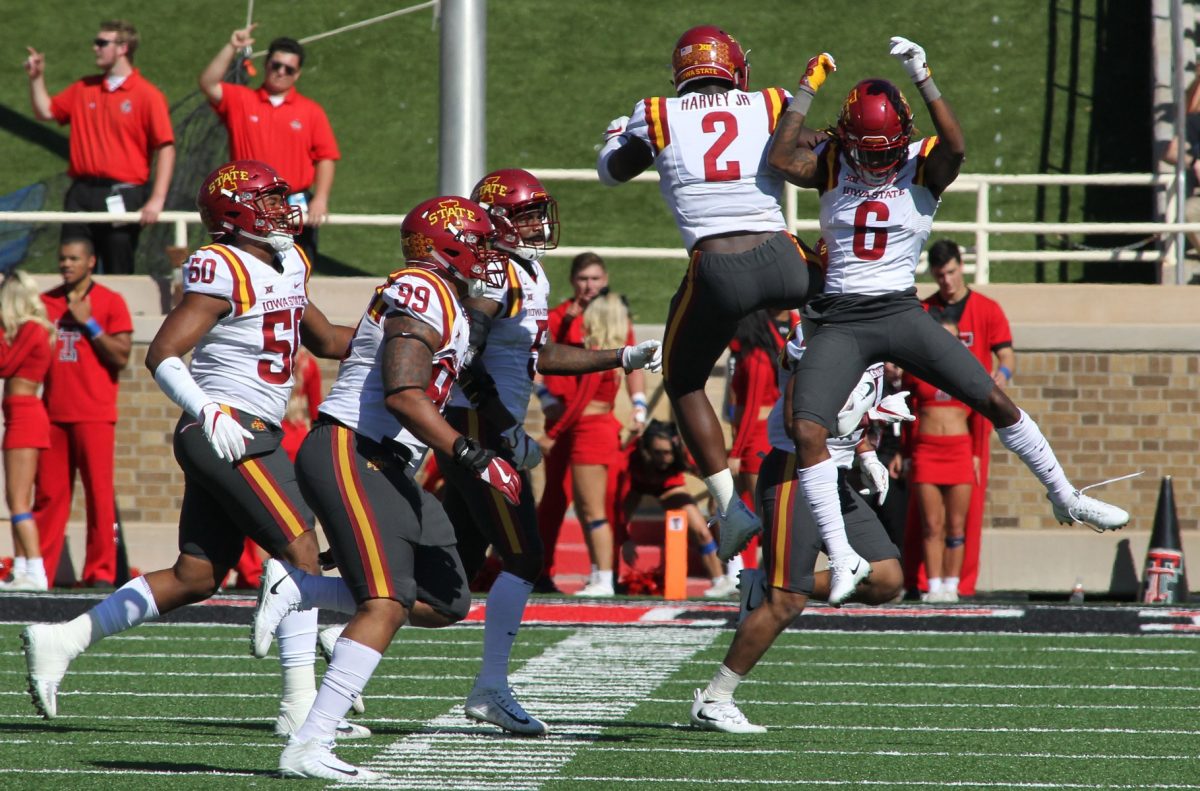 Willie Harvey — despite missing one full game because of injury — boasts a pick-six, a forced fumble and a fumble recovery.

Iowa State’s linebackers are most definitely standing out during this resurgent 2017 season, one in which the team (6-2, 4-1) has ascended to No. 14 in the AP top 25 poll and a tie for first in the Big 12 standings through five weeks.

“I really, really thought that group had a chance to be really special,” said Cyclones coach Matt Campbell, whose team totes a four-game win streak into Saturday’s 2:30 p.m. matchup with West Virginia (5-3, 3-2) in Morgantown. “And not because they’re just great players, but because of who those guys are. And then you’re talking about what we’re getting from Willie — and not just Willie, Mackenro Alexander had a great game on Saturday and did some really good things at that SAM position. (Backup MIKE) Tymar Sutton’s starting to play good football. Reggan Northrup’s certainly done some good things, so we do have some really good balance there at that linebacker corps and I think a little bit more depth than people maybe thought going into the season, but, again, that linebacker corps is getting a lot of positive attention because of what that defensive line is doing as well.

“So I think that front seven is really a working unit as a whole that’s probably been a surprise in some ways and maybe more surprising for me is how well our defensive line is playing — not surprised. I know I said that before the year I think they’re really talented, but that group, getting better week in and week out, really buying into that process and even getting in and out of different schemes has been really impressive.”

That’s a long-winded quote from Campbell and for good reason.

There aren’t enough good things to say about a defense that’s leading the high-octane conference in points allowed, allowing a paltry 13.6 per league game.

The Cyclones have also forced 17 turnovers in eight games — the most in a season since they took away a total of 20 in 2013.

They’ve collected 10 interceptions, the most picks for ISU since tallying 14 in the last bowl season of 2012.

But in a sense, it all starts with Lanning, who until this season, hadn’t played linebacker since the eighth grade. Now he’s tied for first in the Big 12 in tackles, averaging 12.2 stops in conference games.

“I don’t think we’ve done anything in our defensive staff room that hasn’t allowed our middle linebacker to have success,” ISU defensive coordinator Jon Heacock said. “That, in turn, I think, has allowed everybody to have success. We’re not creating ghosts. We’re doing hat we do. We’re starting to get some guys healthy. We can do some different things now with some of the guys we’ve got back in the secondary. Our dime stuff is still out there. There’s things that we can still do, but honestly, I just think they’ve gotten better at the repetitions and we’ve been smart about what we’ve added and subtracted and I think they’ve been working their rear ends off. That crew, I think they’re there as much as we are.”

It shows — in games, in practice, and more importantly, on the scoreboard.

Now they’ll line up against a Mountaineers offense averaging a robust 42.8 points per game.

Ho-hum. Been there, done that, but must keep it going without hiccups.

“We left a lot out there on the table,” Heacock said. “Didn’t do a great job stopping the run. And I think the blessing is our players know it. Our room knows that. So they’re working really hard to try to fix all the issues. We’re still a work in progress.”

But a remarkable work in progress, nonetheless.

“We’re heading into November,” Heacock said. “We’ll find out, really, where we are and who we are starting now. I think the month of November in football in my 35 years is the most critical month. This is the month you want to have something on the table. We do. But now’s when you’ve really gotta play. Now is when everything matters.”