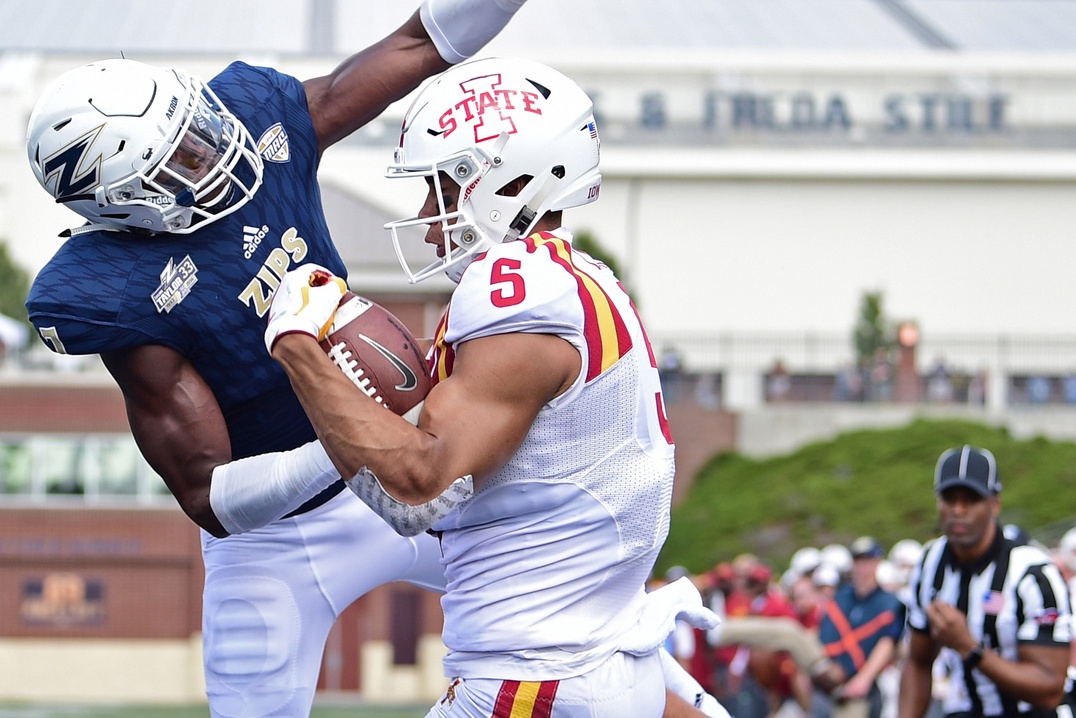 Big numbers through the air for Jacob Park? Check, again.

Iowa State’s performance against an outmanned Akron team on the road? Dominant, with a few hiccups.

The Cyclones (2-1) struggled in the second quarter Saturday, but a 21-0 second-half surge capped a solid 41-14 win against the MAC foe.

“We responded and it was player-led, which was great,” Coach Matt Campbell said on the Cyclone Radio Network after the game. “The second quarter of our football game was indivctiave of some of the things I saw in practice this week … It’s great to learn after a win, but if we don’t learn, we won’t have many more wins.”

ISU led just 20-14 at halftime, but a 43-yard scoring strike from Park to Marchie Murdock re-awakened the offense in the third quarter and then  Joel Lanning’s first career interception set up a nine-yard touchdown run by Montgomery.

“I feel like things are slowing down a lot for me,” said Lanning, who had a team-best eight tackles. “Seeing my keys, reacting to everything faster.”

The Cyclones sped ahead 34-14 and never looked back, winning a non-conference game on the road for the first time since a 20-17 triumph over Iowa in 2014.

ISU also scored 40-plus points in its third straight game — the first time that’s happened since the 1976 season.

Park finished 24 of 33 for 317 yards and two touchdowns. He topped 300 yards passing for the third time in the past four games and also scored on an athletic 15-yard run.

“I’m not a running quarterback, I don’t want to be, but when the time comes, I can run the ball,” Park said.

Deshaunte Jones ignited the drive with a 43-yard catch — his best play of the season.

After a defensive stop, the Cyclones went up 14-0 on Mike Warren’s one-yard touchdown run. Trever Ryen’s 37-yard catch sparked success on this possession.

But Akron revived in the second quarter, pulling within 14-7 on Thomas Woodson’s 45-yard touchdown toss to Kwadarrius Smith.

ISU responded with a pair of Garret Owens field goals, but should have converted more points. Marcel Spears forced a fumble recovered by Brian Peavy at the Zips’ 28, but the offense gained just one yard and settled for Owens’ 40-yard field goal to inch ahead 20-7.

Again, Akron punched back, this time by converting two third downs and pulling within a touchdown at 20-14 on Woodson’s 11-yard pass to running back Warren Ball.

The Zips (1-2) shined on third down against the Cyclones’ defense much of the game,  converting 9 of their first 13. ISU clamped down in the second half, though, allowing just one third-down conversion until the game was well out of reach.

“I think you’ll only continue to see them get better,” Campbell said. “Then you saw probably nine or 10 guys, almost 11 guys on that front play, which is great. We’re going to need them all.”

Braxton Lewis added an interception. Lanning and Willie Harvey each had 1.5 sacks. Montgomery eclipsed the 100-yard rushing mark for the fourth time in the last six games — and second time this season. He finished with 127 yards on 22 carries, helping his team gain 508 total yards.

“We know how to overcome adversity and I think it showed today,” Lewis said.

Allen Lazard added a touchdown catch for the Cyclones, who open Big 12 play on Thursday in a nationally-televised home game against Texas at Jack Trice Stadium.

“Consistency,” Park said. “Consistency in what we do. … We’ve got to eliminate all the errors that we can control.” 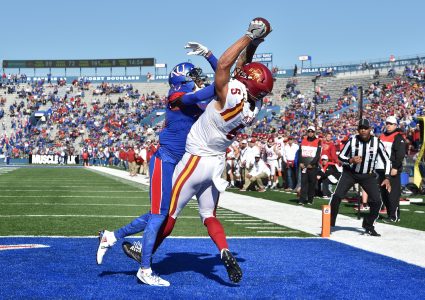