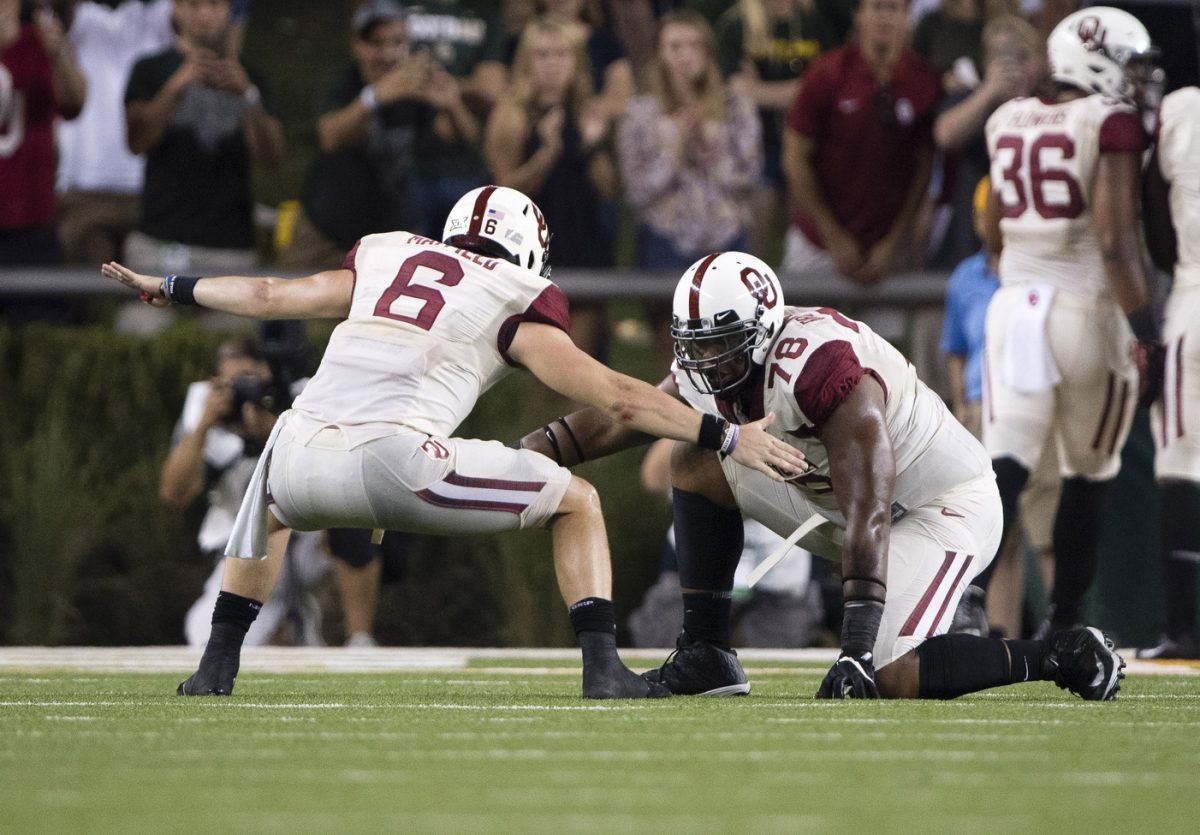 His Oklahoma offensive line is stout, athletic, and as sound as it gets.

Daunting numbers, sure. A prime opportunity to grow for Iowa State’s young and improving defense? Undoubtedly.

“I think when you look at (the Sooners) everything evolves around two things that elite offense have: that’s an elite quarterback and an elite offensive line,” said Cyclones coach Matt Campbell, whose team opened as a 26-point underdog for Saturday’s 11 a.m. game (FOX) against third-ranked OU in Norman. “Veteran offensive line, really talented — and the quarterback spot, what he does, and the consistency that he does it with is really special. He does it with his feet, he does it with his arm. So really a great challenge for us in a lot of ways.”

If the ISU offense can revert to form after struggling in Thursday’s 17-7 home loss to Texas, meeting that challenge of slowing Mayfield and Co. could help puncture that Vegas number and lead to a competitive game.

The Cyclones’ rushing defense ranks third in the Big 12, allowing 115.5 yards per game. The scoring defense is solid so far as well, yielding 24.8 points per game — good for fifth in the conference.

What explains the improved numbers?

“I think the biggest thing that that front is doing, whether it’s four guys or three guys in there, you see those guys making a difference,” said Campbell, whose team (2-2, 0-1) hasn’t beaten Oklahoma since 1990. “They’re gap sound. Ray Lima is, to be honest with you, if you really study the tape, kind of the unsung hero right now with what’s going on on that defense. He’s got the ability to really control the middle of the defense in a lot of ways. Vernell Trent continues to play at a really high rate for us. Getting Jamahl (Johnson) back really helped us a ton.

“You feel confident in there and then what it’s allowed us is the flexibility with Enyi Uwazurike, to be able to move outside and play both outside and inside. I know I kind of said that as the season began, we thought he could play outside and some of those guys got dinged up and we had to move him inside. But he gives us flexibility. And JaQuan, obviously other than the one moment that he had, really played a really good football game. Two sacks and has the ability to affect the quarterback and he’s getting better. So all those names, those are (mainly) redshirt freshmen or redshirt sophomores — young kids that are just learning how to play. I said this early and I still really believe this: that group’s going to keep getting better and better and it’s allowed our linebackers to really be factors.”

It’s bracingly refreshing to see Joel Lanning and Marcel Spears leading the team in tackles, with 11.5 and 10.2 per game, respectively.

All linebackers — and all part of a positive trend that starts with sound line play.

The work up front allows Lanning and Co. to fire through gaps rather than routinely have to shed second-level blocks, which is of particular benefit in the run game, where ISU’s made the most improvement.

“I think when they can run and go find the football and know whoever’s up front of them can have their gap responsibility, good things can happen for us,” Campbell said. “It will be a good test for us obviously this week, because this is as good an offensive line as we’ll play against.”

Mayfield’s as good a quarterback as the Cyclones will face, too.

He’s leading the country in passing efficiency with a rating of 228.3. Even more impressive: the senior’s thrown for 13 touchdowns and no interceptions in 101 attempts.

“He’s really fun to watch if you respect the game of football,” Campbell said. “And you certainly respect the quarterback position. He’s a guy that constantly continues to make really impressive plays. I think his growth in terms of managing the game to getting the ball to his playmakers to his ability to make plays — he’s got it all. Really fun to watch him. Got a lot of respect for him and it will be a great challenge for us, for sure.”

*****Campbell was asked how high Lanning’s ceiling at linebacker would be if he’d played that position all along.

“I think if you’re talking, this is going into year two or three of this, you’re talking probably a high-end draft pick type football player,” Campbell said. “He’s working himself into that conversation anyways, right now. I couldn’t be prouder of the development he’s made.”

“I think those two will certainly meet each other a couple times throughout the football game,” Campbell said.

*****Campbell said no one was hanging his head after Thursday’s 17-7 home loss to Texas. Disappointed? Yes. Discouraged? Not so much.

“The thing I love about our football team, you came into that locker room and there was not one guy upset,” he said. “I think everybody saw and knew the growth that we had Thursday night and you take the lessons that you continue to learn, to grow of what it takes to be successful — a total different dynamic than what we were in a year ago. So for me, it’s a great learning experience. It’s great growth. We move forward and the only thing you can do is continue to hammer away at the details that it takes. Right now our margin for error is not very big in games like this. So what we have to do is figure out success lies in the margin. And success is attention to detail and you’ve got to live it, breathe it and execute it every day.”