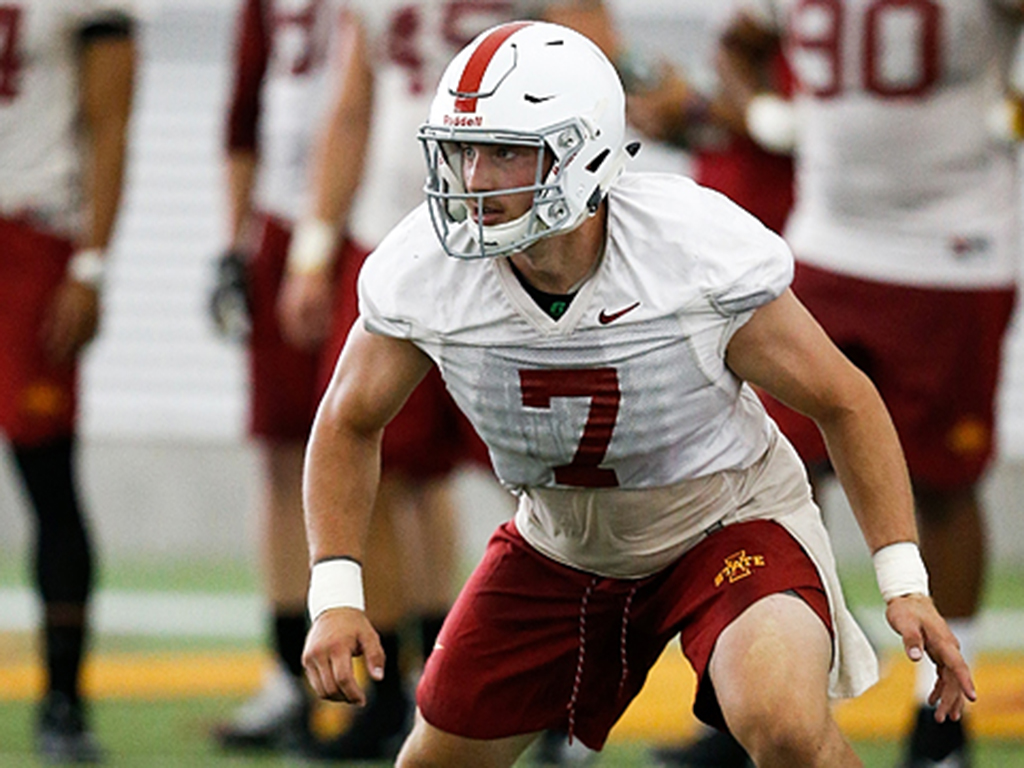 AMES — Joel Lanning wore Allen Lazard’s No. 5 jersey. Lazard donned Willie Harvey’s No. 7. Harvey? He still wore No. 7 — but it was Lanning’s jersey.

Why? Swapping shirts for media day is fun, that’s why.

“It was pretty much the number ‘7’ deal and everyone’s having fun with it,” said Lanning, who’s thriving as a quarterback-turned-MIKE linebacker for ISU. “Me and Willie, we were just like, ‘OK, screw it. Let’s have some fun.’ And Allen’s all about that. I wasn’t even trying to do it. I just went to my locker this morning and the ‘5’ jersey was hanging there, so obviously he had changed it and had some fun.”

Lanning and Harvey both wear the number ‘7.’ That must change, though, as they’ll lineup next to each other on defense beginning with the Sept. 2 season-opener against Northern Iowa.

Harvey — the Cyclones’ top returning tackler with 78 stops last season — said the light-hearted duel over the coveted number has helped the duo bond.

“You would think it would be like somebody moving from quarterback to linebacker that it would be like, ‘What is going on?’” said Harvey, who also tallied three sacks in 2016. “But he, from day one, he was doing excellent in my eyes. Now it’s like second nature to him. He’s improved a lot and he continues to improve. He’s going to be a good player for us.”

The former Ankeny star’s becoming comfortable with being on the other side of the ball — and, Coach Matt Campbell stressed Thursday — he’ll still see some snaps on offense, as well.

“I can already tell you Joel Lanning is going to play offense for us this season,” said Campbell, whose team hopes to improve upon last season’s discouraging 3-9 mark. “I think how much will probably be dictated by situational football as we get into it, as we really start to, we already know what Joel Lanning can do for us on offense. So for me it’s a matter of we’re starting to put the pieces of the puzzle together. What are we, who are we, who are our best players on that side of the football. Situationally, where does it make sense to bring Joel into the football game for us to have success. What do we want to have him do. I think a lot of that is as fall camp continues to develop and see what we are as a football team and what we need will certainly dictate that a little bit, but you can definitely count on seeing Joel Lanning play offensive football for the Cyclones this fall.”

But defense comes first, and by all accounts, Lanning’s progressing both physically and mentally as a middle linebacker.

“You’ve just got to have the right mindset about it,” Lanning said. “I’m super excited for my opportunity. I’m not going to change it for anything. I love playing defense. It’s fun. Playing next to Willie, it will be good to play with him. He knows a lot to help me and there’s a bunch of guys who have experience out there, too. Kamari Cotton-Moya, he’s a big-time talker out there too, so he’s always helping. Playing with those guys just brings the better out of you.”

So does the good-natured fight over No. 7. Lazard was happy to play along.

“Camp’s such a long process and you’ve got to have fun with it,” ISU’s top receiver said. “It’s something I’ve learned in the past three years. If you just try to get through every single day in camp, it’s going to take forever and you’re not going to get what you want out of camp. So if you go into every day trying to have fun, trying to get better, you’ll have a lot better results.”

That’s true regardless of what number you’re wearing. And ultimately Campbell will have the final say on who gets to keep No. 7.

“It’s fun, having fun with it,” Lanning said. “Just trying to learn the defense the best I can. Not trying to learn it super-quick, because it’s going to come. A lot of what I do is dependent on the formations and obviously the offense hasn’t put in that much either. It’s the third day of camp, so I’ve got a lot to learn still and we’ll go from there, but it’s been fun the first few days.”

It’s no secret every football coach wants to win every game, but Campbell took a unique approach while answering the annual “how important is it to get back to a bowl game” question.

“Really for me, the future of the program has zero to do with winning and losing, in my humble opinion,” Campbell said. “Obviously at the end it, winning and losing will take care of itself. (There’s) no greater competitor in this room than Matt Campbell. I’ll cheat in golf if I have to to win. But at the end of this, OK, the deal in football, winning and losing takes care of itself. Yeah, we want to go play in bowl games and, yes, our goal is to be Big 12 champions someday, OK? But for us to get there, we have to learn what the process is and laying a foundation to continue that. I think we’ve laid a really good foundation and success will take care of itself. I despise — it’s certainly our job out here as media to talk about that, and I get it. I get it more than anything. But within our walls, it has to be about growth that you guys can’t see and intimately it transfers onto the field when those games come along and you start to see what happens. Where are we as a football program? Gosh, I don’t know. We’re in year two of taking this program over and seeing that there’s a lot of young guys that are playing. Does that mean we can’t win and not have success? Absolutely not. That doesn’t mean that. But it’s going to be really fun to see where this team is in four weeks as we get ready to play and play a really great schedule and a great challenge for this football team. Six wins, is that our goal? Win six games? Not here, not me. My goal is to win every game.”

TRUE TO HIS WORD

After committing to Iowa State, talented JUCO defensive tackle Ray Lima continued to draw heavy interest — and wooing — from big-time programs. The 6-3, 306-pound use guard wouldn’t budge from his commitment, though.

“When I first came on a visit, I looked around, prayed on it, and said this is the place for me,” Lima said. “I said my word to Campbell. I called and made sure to tell him, ‘I know it’s getting heavy right now, but I gave you my word, so I plan on sticking on it.’” 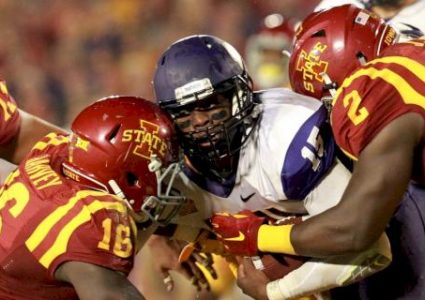