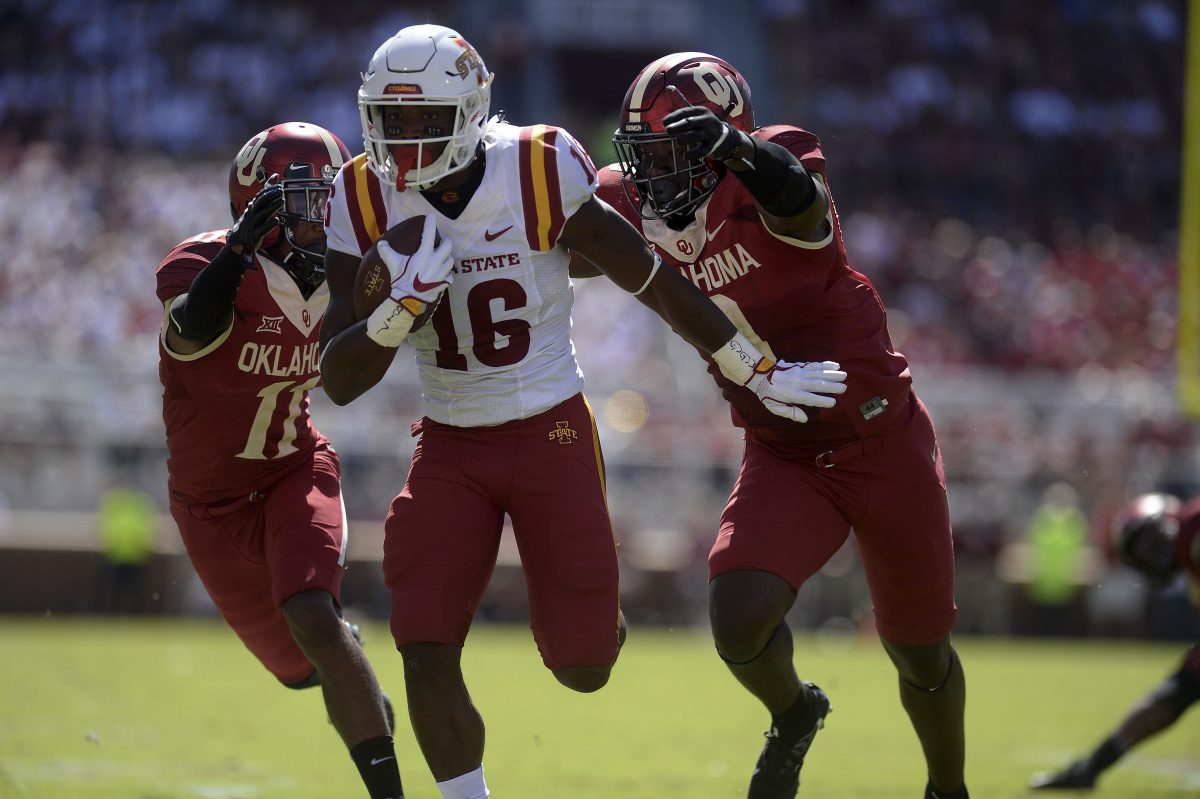 We are now halfway through the college football season so it seems to be the right time to hand out the statistical midterm grades for the Cyclone Football team.

The Cyclones are sitting at 4-2 as many of us hoped in early August; they just didn’t get there via the most conventional method when they notched a win over Oklahoma for the first time since 1990 and just the second time since 1961. The Sooners have thoroughly and consistently emasculated Iowa State in the long history of the series which contains 82 games. Iowa State’s 38 points against Oklahoma was the second most all-time and just the third time in school history that they have topped 30 points. Further, in the 82 games in the history of the series there has been 70 times that Iowa State did not score more than 14 points. Seventy.

But, back to the topic… we’re currently sitting at a place where Iowa State is sitting as a fringe Top 25 team and it isn’t unreasonable. Nearly every computer based ranking model has the Cyclones in the Top 40, most of them closer to 25 than 40; including my personal favorite CFB Analytics.

Now is the logical time to check in with key statistical indicators to success as well as some other notable numbers…both good and bad.

Scoring (Adjusted Offensive Efficiency) – The Cyclones are scoring a schedule adjusted 2.39 points per possession, which is the 32nd best offense in FBS via the CFB Analytics ratings.

Percentage of Available Yards – Yards per game is the number most often cited to show how well a team can move the ball, but it lacks context because it doesn’t account for the total number of possessions or field position. That’s why I refer to percentage of yards gained instead. Percentage of yards gained is the total number of yards a team gains over the potential yards to be gained based on the number of drives and field position. By that metric, the Cyclones are just 74th by gaining 42 percent of available yards (FBS average is 45 percent).

(There are two basic ways for an offense to be successful gaining yards, and that is by making explosive plays (20 yards or more by how we judge it) and methodically moving the ball down field via “success rate”. Success rate is essentially gaining the minimum yards on each play to stay ahead of schedule to get a first down. We chart a play as successful if it gains at least 40 percent of needed yards to get a fresh set of downs on first down, 50 percent of remaining yards on second down, and all of necessary yardage on third down, and same for fourth down if they go for it.)

Success Rate – The Cyclones aren’t all that impressive here, notching a success rate of just 46.6 percent (83rd). That leaves an offense in a strained position of being behind the sticks to keep the ball and score points, or a big reliance on explosive plays…

None of those numbers would lead you to believe that the Cyclones would have a top 35 scoring offense, but…

*** Iowa State is 6th in yards per point, 11.3 (the smaller the number the better for this measure that is essentially how hard an offense has to work to put points on the board)

*** The offense is scoring an average of 2.77 points per possession prior to schedule adjustment (37th)

*** The offense comes in at an average of 6.02 yards when adjusted for the strength of FBS defenses played (46th)

*** The offense has lost yardage on just 32 plays this season for a negative play rate of 7.8 percent (34th)

Entering the season, the offense was expected to carry the load if the Cyclones were to be able to achieve real success and reach a bowl game or more. Through six games, the offense is ahead of the defense on the national scale but relative to expectation within the program itself, a lot of the team success goes back to the defense out-performing the baseline set in August, by a wide margin.

Scoring (Adjusted Defensive Efficiency) – The Cyclones are holding opponents to a schedule adjusted 1.92 points per possession, which is the 47th best offense in FBS.

Percentage of Available Yards Allowed – When it comes to yardage allowed, the Iowa State defense is giving up just 34.1 percent of available yards (27th)

Success Rate – The defense continues to keep the opponent behind schedule and is getting better at getting off the field on 3rd down, and it shows here in their success rate. They’re holding opponents to a success rate of 43.3 percent (35th)

Explosive Plays – On the defensive side, Iowa State has given up 27 total plays that were 20 or more yards. That puts their explosive play rate on defense at 6.5 percent (71st). The interesting thing of note here is that eight of those plays came against UNI and six more against Iowa with just 13 more in the last four games of this season. This is clearly an area where Iowa State is improving this season.

Red Zone Scoring – Just 21.3 percent of opponent possessions are reaching the red zone (27th) which is good because of the 17 trips opponents have made inside the 20 they have scored on 16 of them. The lone trip without points was a certain game changing fumble in Norman, Oklahoma recovered by Joel Lanning. Opponents have scored on 94 percent of trips (119th) and gotten to the end zone on 76 percent of red zone drives (118th)

Turnover Percentage – The defense is doing reasonably well creating turnovers by gathering a takeaway on 2.6 percent of plays (45th) and 13.1 percent of possessions (47th).

*** The Cyclone defense is giving up just 33.8 percent of its yardage against the run, the 20th best in the country.

*** The defense has come up with a play for negative yardage 45 times this season for a rate of 10.8 percent, the 38th best in the country.

*** Six percent of opposition’s 3rd downs are at a distance of 10 or more yards, the 29th best in the country. Though, opponents have converted on 29 percent of those 3rd down tries putting ISU’s 3rd down conversion defense from that distance at 111th in FBS.

Lastly, Iowa State as a team is committing a penalty once every 30.56 plays, the 15th best in the country and the Cyclones are 5th in the country in opponent field position with opponents starting at the 25 yard line on average.

In summary, there are honestly few areas where Iowa State clocks in with elite or even great statistical numbers, but they don’t have a major weakness and they are doing the little things right; the details that Matt Campbell is always harping on. Turnovers, penalties, and field position. And, as it turns out they have a defense that can stop the run, cover in the secondary and the anchor is up the middle with Ray Lima, Joel Lanning, and Kamari Cotton-Moya.

Meanwhile the offense has playmakers to piece together with a growing offensive line that doesn’t make for a dynamic offense but a sustainable attack that can move the ball without being stifled and put points on the board.

In closing… a story.

Maybe you know this, but Iowa State fans can be a fickle bunch. We’re each an odd melting pot of self-loathing and fierce defensiveness against the questioning of outsiders. We don’t wait for the other shoe to drop we set our watches to it.

So when I was sitting in my normal spot during the game with Kansas and overheard the conversation behind me, I was a bit caught off guard. A college aged kid and likely his father or uncle were having a conversation about Iowa State’s potential and how good they are after beating Oklahoma.

Win this game, win that game, and they’d definitely be ranked.

A discussion that lifelong fans just don’t have. We don’t count or chickens before they hatch during football season.

It was later when I spoke with them that I learned they were new to this experience and the college aged kid was indeed college aged and attending Iowa State. That explained their outside perspective, but, is it wrong? Nearly every analytical measure has Iowa State as a top 40 team and its two losses are to teams that are widely top 25 in those same polls.

Maybe Iowa State is that good. They essentially have five tossup games remaining with three of them being on the road. The lifelong fan is full of dread and doubt, but maybe these Cyclones are not your Daddy’s or your Granddaddy’s Cyclones.

Maybe these Cyclones are Lane Danielsen as a freshman at Oklahoma State. Or Sage Rosenfels finding a victory at Boulder. Or Brent Curvey scooping and scoring in Waco. Or Todd Blythe having a banner day in College Station. Or Jeff Woody finishing off a college football changing upset. Or Jake Knott tipping an interception to himself in Iowa City.

Maybe this collection of dudes is from a new mold, a new standard. We’re about to find out.