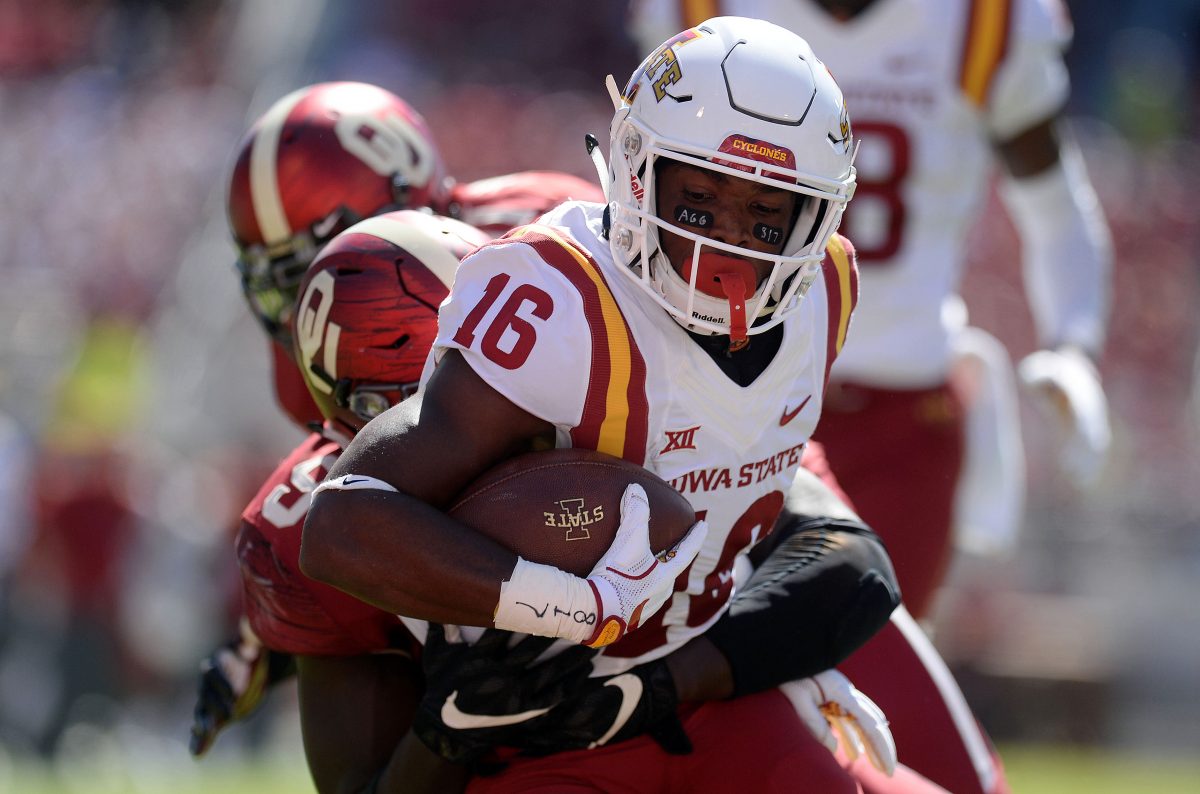 “This isn’t really going to happen, is it?”

Those words were replaying in my mind over and over as the second half played out in Norman. Each moment that went the Iowa State way brought an increasing amount of belief. When the third quarter began and Iowa State trailed 24-13, the discussion in the Cyclone Radio booth centered on how hard the Cyclones were battling, but yet there still felt like the story was pre-determined and Oklahoma’s dominance would win out. They had a 27 year winning streak, a Heisman level quarterback and 90,000 fans on their side.

The series of events that transpired over the next 90 minutes is the stuff we’ll all tell our grandkids about. Iowa State 38, No. 3 Oklahoma 31. Several days later and it feels even more incredible.

It was as if the ghosts of past Cyclone misfortunes convened together to reverse all that has ailed the Cyclone Football program into one unforgettable afternoon.

In the last 20 years, there have been nearly a dozen times where field-goals have been the gut-wrenching down fall of the Cyclones. A game winning field goal missed against Alabama in 2001. Chances to win the Big 12 North in 2004 and 2005. A missed extra point to send a game against K-State to overtime in 2009. A chip shot to beat Toledo in 2015 all went by the wayside.

On Saturday, Cyclone kicker Garrett Owens was perfect, drilling three critical field goals and each extra point with no stress involved. It was Oklahoma and its decorated kicker Austin Seibert that had the crucial miss. With the score tied at 24 and 12 minutes remaining, Seibert missed from 44 yards. One minute later, Iowa State had a 4th quarter lead against Oklahoma for the first time since 1997.

How about the Big 12 refs on Saturday?!

I don’t need to go into grand detail about the many a time Iowa State has felt hosed by the stripes and replay officials over the years. But on Saturday, Iowa State received the benefit of the doubt and took advantage. Iowa State had only three penalties for 17 yards compared to OU’s six for 59. Two OU penalties setup Iowa State’s first touchdown and the most monumental OU mistake occurred on Iowa State’s game winning drive. Facing a 2nd and 15 at the Cyclone 20 yard line, Kyle Kempt completed a dump-off pass to David Montgomery for seven yards. Well after the play was over, OU’s Kenneth Murray got whistled for unsportsmanlike conduct. Instead of a 3rd and 8 at the 27 yard line and the crowd going bonkers, Iowa State got an automatic first down, the crowd was deflated and the rest of the drive is Cyclone legend.

But it wasn’t without some drama. After Allen Lazard’s acrobatic game-sealing catch, the play went under review. Dread came over all Cyclones, they had seen this horror movie before. Even Cyclone sideline reporter Ben Bruns mentioned to me off the air that he felt the ball may have touched the ground. After a couple of excruciating minutes referee Reggie Smith emerged, “The play on the field stands as called. Touchdown.”  In some serendipitous twist, Reggie Smith was also the referee (white-hat) for Iowa State’s shocking win over Oklahoma State in 2011. We love you Reggie!

Yet even with the ball bouncing Iowa State’s way, OU still had a chance with 2:20 to go and Baker Mayfield at the helm. The Sooners needed a touchdown to force overtime. With their juggernaut of an offense, the game was plenty in doubt. Iowa State was almost in an identical situation three weeks prior against Iowa and couldn’t seal the deal. History has an odd way of repeating itself. If you took a poll of the Cyclone fan base at that point, I am guessing the majority still was waiting for the customary groin-kick.

History had nothing on these Cyclones. The Iowa State secondary (who was phenomenal all day) locked down the All-American Sooner receivers and Mayfield had nowhere to go. Turnover on downs.

Iowa State had 1:15 to go and all they needed to do was take a knee. Need I remind you, this hasn’t always been an automatic operation in recent years?  The heavens have a weird sense of humor. This time, there were no troubles. The clock ticked to zero and Iowa State shocked the world. The Cyclones had done it, they had really done it.

A few days later and I still get goosebumps thinking about Saturday. Seeing Iowa State defeat Oklahoma for only the second time in my life, and to do it with everything stacked against them is why we all keep coming back through all the Cyclone pain. The rest of Saturday was a blur, it was the happiest flight back to Iowa of my life. The exhausted Cyclones even started an impromptu, “Kyle…Kempt” chant right before take-off. It was beautiful.

I tend not to think too philosophically about life. But I believe that we follow sports because they mean something to all of us. In a world that moves faster and more divisive by the minute, we still carve out hours in a week to sit back and watch our teams compete, to bring us together, to represent us. It may seem like a silly investment in precious time, but that moment when Iowa State took a knee and the game was over was something we’ll never forget. It was an out-of-body feeling, pure unadulterated elation. Those moments don’t come often but when they do, you cherish them for as long as possible.

Because with the high tide of emotion comes an equal fall. And Cyclone fans have the all-too familiar knowledge that jubilation can turn to misery in the split second of a missed field goal or an overturned review. That is the risk you take in anything that means something.

But on this day, Iowa State made that loyalty pay off. The surprise celebration is always the most monumental. That feeling of joy can never be taken away.