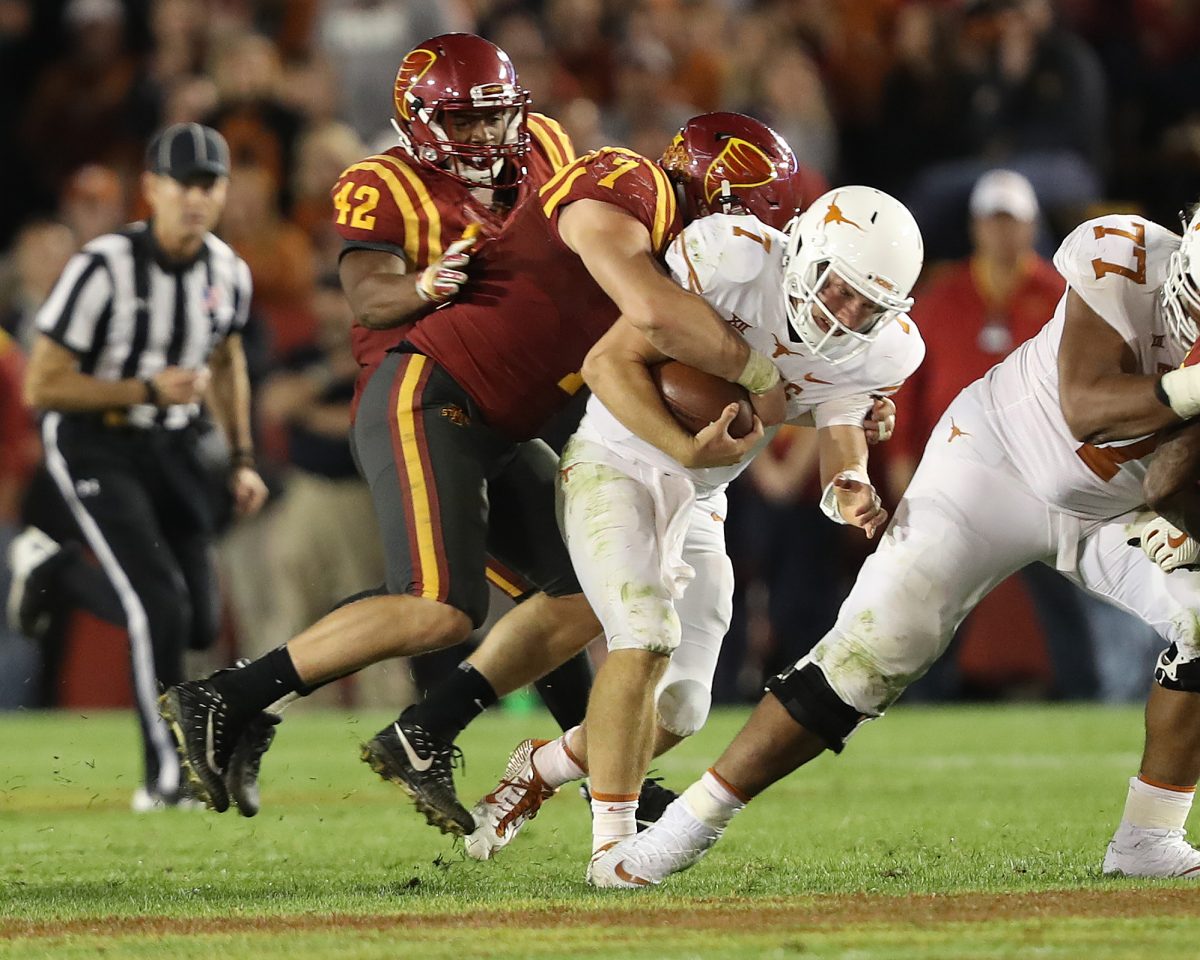 AMES — Joel Lanning shrugged when asked about his 20-tackle performance in Thursday’s 17-7 home loss to Texas.

A loss is a loss, more or less.

But what did those teammates think of his sideline-to-sideline pursuit and lassoing of Longhorns? They were a bit more generous.

“Wow,” fellow senior captain Kamari Cotton-Moya said. “Wow. Joel is one of the best football players I’ve seen in a long time. Joel can play — 20 tackles, wow. I saw him make a tackle early in the game and I was just like, ‘OK.’”

Lanning’s rapid development at the MIKE linebacker position has been a talking point ever since he made the switch from quarterback in the spring.

Thursday, he took another step up that ladder by becoming the first Cyclone since Alvin Bowen in 2006 to notch 20 or more tackles in a game, though he’ll tell you he could have been better in coverage and he left some plays out there.

But back to Cotton-Moya — whose interception in the third quarter could have, but didn’t, jump-start a typically high-octane offense that was stymied all night:

“Joel adjusted to playing linebacker so fast and I’ve never seen someone adjust that fast to play linebacker,” said Cotton-Moya, who returned from an elbow injury. “He’s a great leader. He’s a great captain. And he’s not scared. He plays and he plays and he plays. I’m looking forward to see Joel play and come next April he’s going to be drafted. I really believe he’s going to be drafted at linebacker and playing at a high level.”

Again, high praise. Again, a Lanning shrug. He’ll only truly take pride in any personal performance once winning happens more often than losing — and that, like his rise at the MIKE spot, remains very much a work in progress for the 2-2 Cyclones.

“We were playing fast tonight, flying around,” Lanning said. “We were all pursuing to the ball pretty well. Going into next week with two extra days is big for us as well. We’ve got a big-time opponent (in Oklahoma) next (Saturday) down at their place, so it’s not going to be easy. It’s going to be a fun atmosphere down there. I’m looking forward to going down there and playing.”

“Not easy” and “looking forward” to it. Let’s hope every single Cyclone shares that approach to the often duanting trip to Norman (and back).

“We’ve just got to put things together,” Cotton-Moya said. “We’re really a good team and we’ve got to keep going forward.”

Allen Lazard caught at least one pass for the 39th straight game, extending his program record. … Matt Eaton recorded his first career touchdown catch, but also had a costly drop on a well-thrown ball by Jacob Park. … Cotton-Moya said he’s feeling good after missing most of the Iowa game and all of the Akron game with an elbow injury. “I’ve been down before,” the senior from Bakersfield, Calif., said. “Everyone counted me out, but I never count myself out and I’m always going to keep grinding.”