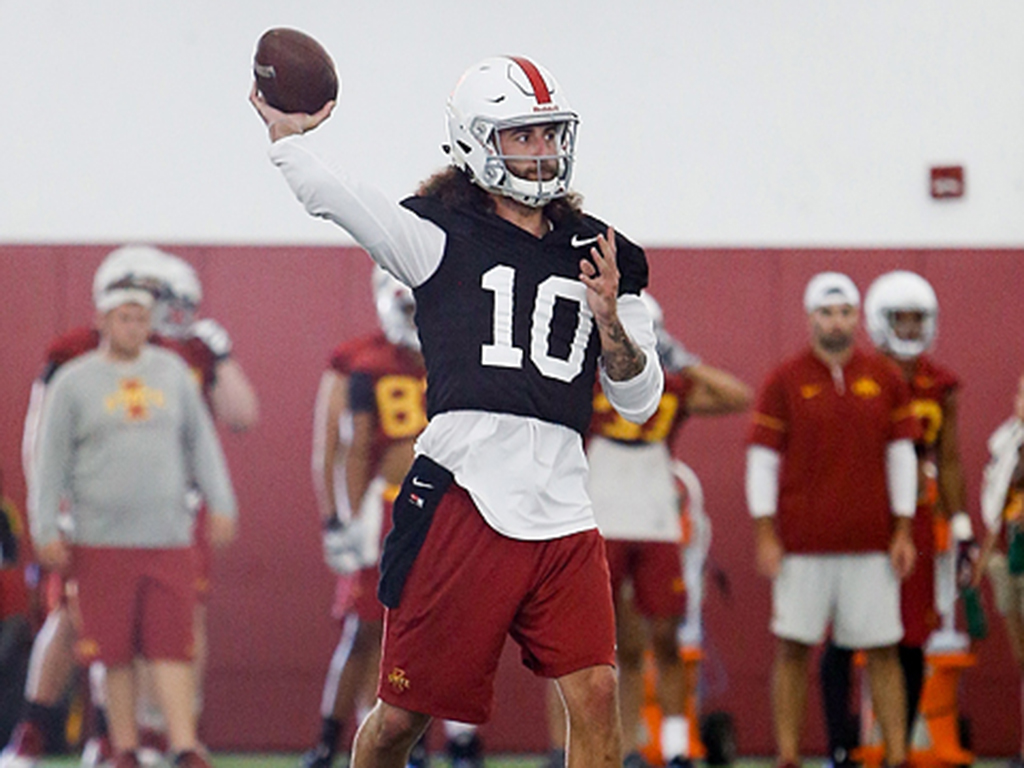 One — the Superman logo — leaps from his artisan-crafted living tableau.

The Cyclones’ colorful playcaller enters this season with an array of weapons at his disposal.

But hearing Park quantify the standard he’s set for himself will likely cause your head to spin (on a tight spiral, of course). The takeaway: If you’re going to dream, dream on an epic scale.

“It will be way better than it was last year,” said Park, who threw for 12 touchdowns and five interceptions as a part-time starter last season. “Way more efficient. Way better decision-making. I watched film from last year and I was making throws and it wasn’t even where I was supposed to throw the ball and I still completed it — and for big yards. But the dude I should have thrown it to was farther downfield and more wide open and would have had more yards for a touchdown, so it’s going to be night and day. It really is.”

As for numbers? Cue the head-spinning.

“I’m shooting for, I think the other day I was talking to my brother, I said, ‘36 touchdowns, five interceptions for 4,000 yards,” Park said.

Whoa. Whether those are realistic self-set expectations or not, you have to admire the sheer audacity.

And Park’s pedigree — coupled with the size, skill and number of his top targets — certainly points to a significant statistical spike.

“With the receivers I have right now, anybody can make a big play. It makes my job really, really easy,” said Park, a former four-start recruit who began a circuitous college career at Georgia. “When you’ve got Hakeem Butler, Allen Lazard, Chase Allen, Matt Eaton, if they’re all on the field at the same time, it’s going to be hard to cover any of them.”

“I think I play a lot like him,” Park said. “I watch his footwork and I try to break down some of the stuff he does. I like how, if you ever watch him play, (he’s) real calm, he’s real — even when he’s in the pocket moving around, he doesn’t even seem like he’s flustered. I just appreciate his whole demeanor and how he plays the game.”

“The nice thing for all of us is we’ve seen some of his high moments,” ISU coach Matt Campbell said of Park. “We’ve seen his moments where he’s played really good football. When you watch that, you see a guy who has the ability at this level in a Power 5 conference in the Big 12 play at a really high rate. We already know what when he’s playing his best looks like. Now it’s a matter of taking those last six months and creating that consistency. Those rough edges, smoothing those out. Really giving him the confidence of here’s our offensive playbook. Here’s what our expectation of you on a day in, day out basis is. Having that ability to be consistent. I think his ability level is as high as any quarterback I’ve certainly had the ability to coach. He’s got elite arm strength. He’s got the ability to make all the throws. He’s elusive. He can create and move in the pocket.

“All those things that you want from a quarterback, but what’s been really enjoyable about Jacob Park is to watch his growth. Even the first three days of practice, I think you leave the first three days of practice and you say, ‘you know what, there’s a guy who really feels comfortable in what he’s doing offensively.’ We’re excited about Jacob. Jacob is probably five games into where he’s been the starter so there’s going to continue to be growth in his career, but if he continues to go the way he’s going and he’s shown to go so far I think he’s got a chance to have a great career here.”

Park said he’s a “deep breather.” It’s something his mother taught him when he was a self-described “angry” youth. As for being as calm as the stoic Rodgers, he’s not quite there yet.

“I’m glad y’all think I’m calm,” Park said, smiling. “It’s something I’ve been working on for a while. When I was in high school, my head coach used to tell me I played quarterback like a linebacker. Never knew what he was talking about until I started studying the game and watching Aaron Rodgers and then you watch someone like Tim Tebow play the game. When Aaron Rodgers walks on the field, he’s very calm. It’s like he’s just going to go out here and throw some footballs. When Tim Tebow comes on the field, you know, he’s very energetic, he’s hyped up. I was Tim Tebow and I want to be Aaron Rodgers.”

That transformation — like his lofty goals — remains a work in progress. Key word: Progress.

“It’s night and day,” Park said. “I come out here to practice every day to see if I can be perfect. Not if I can be good, or great. I want to be perfect with every read, every decision, every throw — and I’ve been pretty close a few times. It’s just my preparation has put me at a whole other understanding of the game and it’s fun.”

Park’s story is complex, yet incomplete — just like his ever-expanding tattoo inventory.

“He gets one about every other week,” Lazard said.

Park’s body art spins a tale both true and fanciful. Polished and rough hewn. But at it’s core, real.

“I’ve always been into art,” Park said. “Painting and drawing and stuff like that, so I grew up — my uncle was a tattoo artist. He has his own tattoo shop. He’s always had tattoos. My mom has tattoos. My dad has tattoos. It’s something I was always drawn to, and in my lifetime, tattoos have become a big trend for my generation. I like my tattoos. They’ve all got meaning. Different meanings. Constant reminders every day of hard times, things I need to be grateful for. I wear my story on my sleeve.”