There were not many surprises on Iowa State’s pre-fall camp depth chart released earlier this week, but one listed starter in the linebacking corp was definitely unexpected.

Redshirt sophomore Marcel Spears Jr. was listed as the starter at one of the Cyclones’ three linebacker spots ahead of incumbent Reggan Northrup despite seeing little true action last season. Spears played in 11 games in 2016, but most of the action he saw came on special teams.

Spears was rated as a three-star recruit out of Olathe North High School in 2015. He chose the Cyclones over Kansas State, Kansas and Missouri. The former second-team all-state selection was rated as the No. 72 outside linebacker in the country and best one in the state of Kansas.

The 6-foot-1, 215-pounder finished his high school career with 337 tackles, 21 of them for a loss, seven sacks and four interceptions. He recorded more than 100 tackles during his sophomore and junior seasons.

Iowa State head coach Matt Campbell said Spears put together one of the most impressive springs of any player on Iowa State’s roster, and there is still a long ways to go before Northern Iowa rolls into Jack Trice Stadium on Sept. 2, but it is still encouraging to see a young player come into his own in his third year on campus. 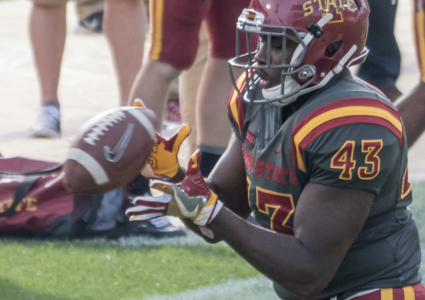