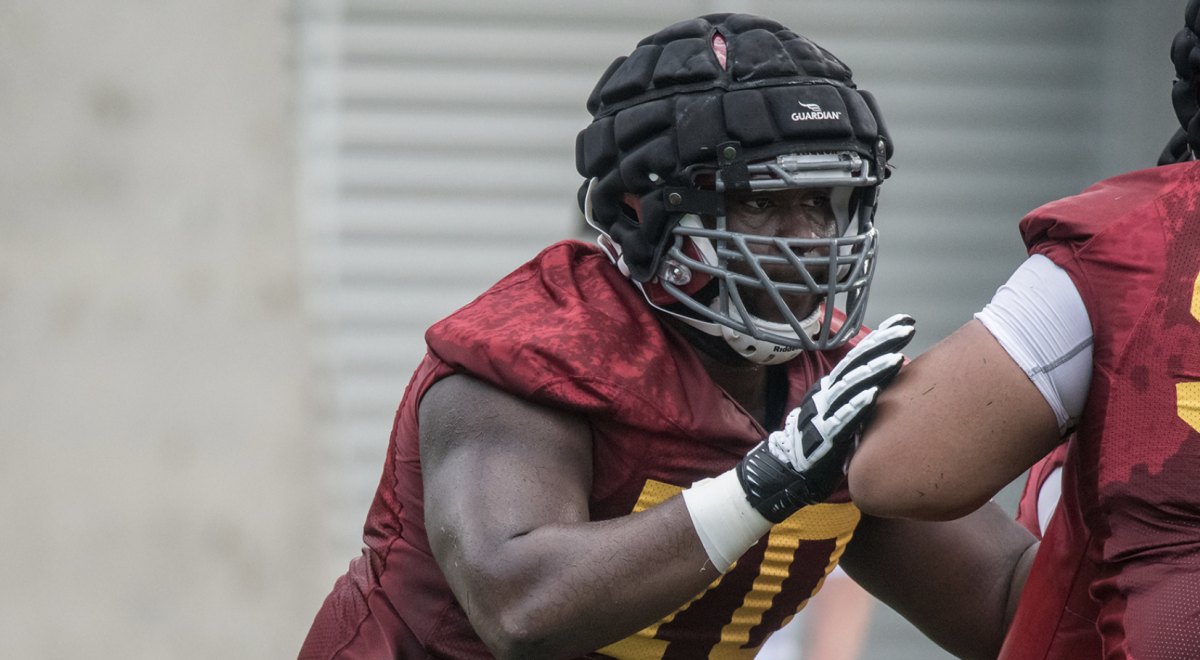 Questions continue to surround Iowa State’s offensive line as the final week of spring practice starts, but it does seem like the group is starting to take shape. It will be tough for the group to fully fill out before graduate transfer David Dawson gets on campus this summer and Jake Campos gets back to full health.

With that said, several players have stepped up this spring and started to take on bigger roles than last season. One of the most notable players filling a bigger role so far this spring is redshirt freshman Sean Foster, who started the Cyclones’ scrimmage on Saturday at left tackle.

“He’s doing good,” offensive coordinator and offensive line coach Tom Manning said after the scrimmage. “When you play tackle and you’re a young guy, there’s a mental side going on and then at the same time you have to block the edge and block the blind-side of the quarterback so there’s obviously challenges. I think we’ve been really happy with his progression and his growth because he’s paid attention and has really worked on the details of his game and really has a hunger to learn. He’s done a good job.”

A late arrival on campus kept him from making an immediate impact for the Cyclones last year, but his progress this spring has put him in position to battle for a spot in the rotation next fall.

“I think Oge in the last couple weeks has really made tremendous strides,” Manning said. “I think he’s invested himself into what it takes from a 365-day building equity in what you do as a football player. I think he’s really starting to understand what that process is and his growth has been, at first it was incremental and now it’s kind of rapidly we’re starting to see a little bit more of what his potential and what his talent is. It’s been a great pleasure to watch him the last couple weeks.”

The staff has continued to bring Campos back slowly after he suffered a broken leg in fall camp last season then a sprained ankle earlier in the spring. Once he is able to return, it isn’t immediately clear whether he’ll return to left tackle or if he will play the right side opposite of Foster.

“I think that’s an interesting question,” Manning said. “I think we have to determine exactly what’s the things that will limit his mobility, if there are any. I think that’s a big piece you’ve kind of got to figure out a little bit with him. Just try to put him in the best position for himself to be successful so we’ve worked on different ways of finding flexibility within. I think you guys know, in spring especially, I like to move guys around and see who can play what position, who works better with what guys so I couldn’t tell you for sure where he’ll return at, but certainly he’s working really hard to do so.”

It is also not completely clear whether Good-Jones will continue to work at center or if he’ll slide into a different position along the line. With Dawson’s arrival pending the next few months, it will give Manning and the rest of the staff a little more flexibility with the group than they might have had a year ago.

And even with questions still swirling, there’s little doubt flexibility is a good thing for Iowa State’s offensive line.