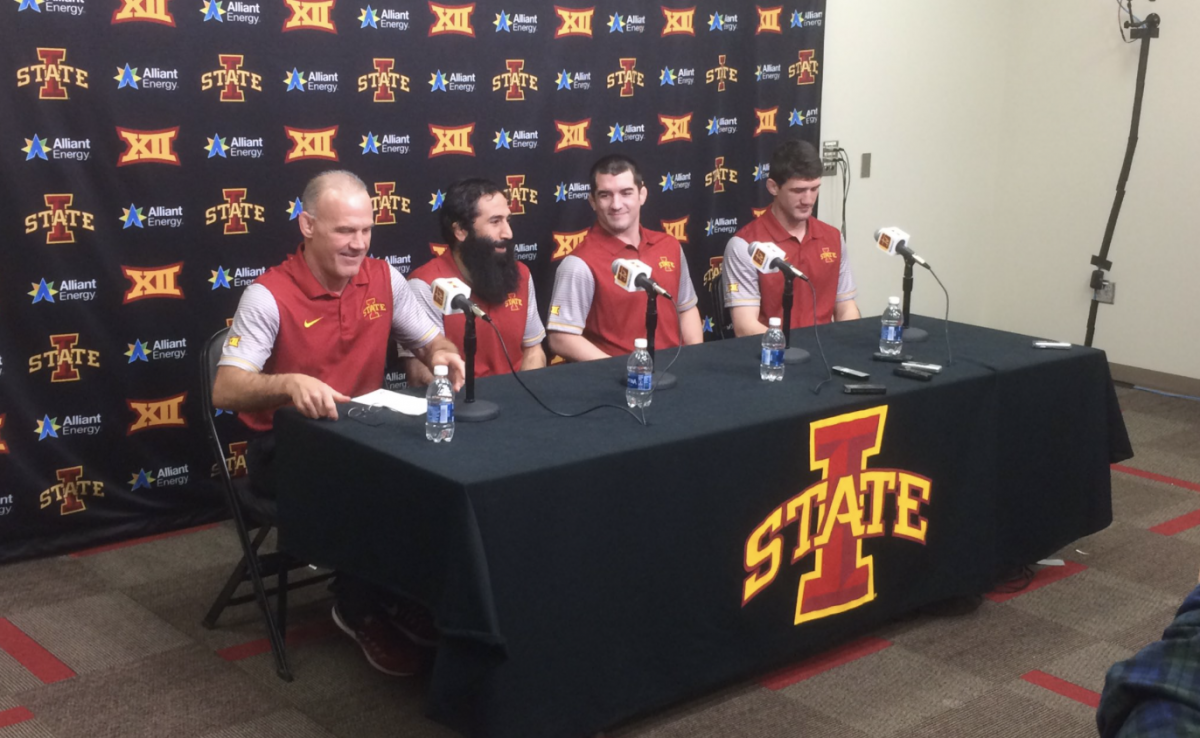 When new Iowa State head wrestling coach Kevin Dresser was still at Virginia Tech, he had to figuratively pry Mike Zadick from the mountains of Montana.

Zadick, who was named Iowa State’s associate head coach last week, was content being away from the sport. As a coach and a competitor, Zadick had accomplished everything he wanted to.

From 2004-2012, Zadick was an assistant coach at Iowa, where as a competitor at 149-pounds, he had been a three-time All-American and won the 2002 Big Ten championship. It was early in 2012 when he had a falling out with Iowa head coach Tom Brands.

“I haven’t talked to (the Brands brothers) since I left the program in June of 2012,” Zadick said last week in Ames. “Just had a difference in philosophy.”

Once Zadick left the Hawkeyes, he returned to his home state and became “mountain man.” He lived 20 miles down a gravel road. His closest neighbor was three miles away.

The Great Falls, Mont., native spent his first year and a half away from the mat hunting, trapping and hiking. He worked as a guide and once spent roughly 60-straight days hunting.

“When you don’t have anything to do in the woods, you think of things to do,” Zadick said.

Zadick decided to build things. He didn’t have anywhere to hang his clothes, so he built a closet. He built a new bed and maintained the cabin he called home.

The silver medalist at the 2007 Pan American Games didn’t have a workout room. He made a curl-bar out of steel wheels the size of 35-pound plates he had drug up to his cabin. He started work on a sauna but because Dresser came calling, it still sits unfinished.

Zadick, who is one of 17 wrestlers from Montana to win four high school state titles, didn’t have cell service. Lucky for Dresser, he did have WiFi.

The Virginia Tech head coach sent Zadick a Facebook message in 2015 and asked if he’d be interested in being an assistant coach for the Hokies. Oddly enough, Zadick had just re-entered the coaching world. That didn’t make leaving his cabin for Blacksburg an easy sell.

“It so happened at the time I volunteered (as an assistant wrestling coach) at local high school about 40 miles away called Choteau High,” Zadick said. “There was 12 kids on the team and we happened to that year go to the state championship and win it for the first time in like 25 years.”

Suddenly, Zadick was excited about wrestling again. Dresser called him a month later and convinced him to head to Virginia for a meeting. Even then, nothing was set in stone.

“I think my brother told (Dresser) that ‘If you think you are getting Mike out of the mountains, you will have to bomb him because he ain’t leaving,'” Zadick said.

Zadick told himself there was no way he was going to Virginia Tech. It was too far away from Montana and he had grown accustomed to seeing his family more often than just during the holidays.

That feeling changed once Zadick stepped foot in Virginia. It felt like the right situation, but there were still a few stipulations Dresser needed to meet.

Zadick wanted to implement his coaching philosophy. He needed a certain amount of money. Lastly, the former Big Ten champion needed some insurance.

During Zadick’s two seasons at Virginia Tech, the Hokies flourished, finishing fourth and sixth during the 2016 and 2017 National Tournaments. The program produced 11 All-Americans and eight ACC Champions.

“I told (Dresser) I was gonna watch for two weeks and not do anything. I just wanted to see how everything was ran…I couldn’t make it a week,” Zadick said. “The majority of every week I ran (practice). I didn’t know at the time, but it was a culture shock to everybody because I guess Dresser ran everything.”

Coaches who have been at Virginia Tech for a decade told Zadick he had coached more practices in his first year than they ever had. From Christmas to the end of the year last season, Zadick had a full control of Virginia Tech’s practices.

When Dresser was announced as the new head man at Iowa State, speculation swirled that Zadick would be his main target as an assistant. Despite the opportunity to stick with Dresser, leaving Virginia Tech for Iowa State wasn’t an easy decision.

Zadick considers his athletes family. To walk away from those relationships, along with how well the administration treated him, it was hard for Zadick to leave Blacksburg.

Once again, Dresser had to promises the three things: A hands on coaching role, a certain amount of money and insurance. But, it was the state of Iowa’s love for wrestling that pushed Zadick over the edge on his decision.

“Couple years ago, my brother and I were here and we broke down on the side of the road,” Zadick said. “We’re in town but here comes a guy running out of his business and he is like ‘Zadick brothers! Are you kidding me?'”.

Zadick’s truck had a broken U-Joint on it. However, the man who shouted his last name along with another helped him fix it within 25 minutes instead calling a tow-truck.

“That kind of relationships you built over the years, it goes well beyond that, but that’s the power of it,” Zadick said. “How important the sport is to fans and how the fans are important to the sport, it to me was a no-brainer.”

One of the biggest talking points since Dresser took over is whether or not he can help re-establish the Iowa-Iowa State rivalry. While that certainly is a goal for him, Zadick and the rest of the Cyclone coaching staff, it isn’t their main concern. Zadick is more focused on competing with the Penn State, Oklahoma State and Ohio State’s of the world.

“Penn State, that’s the team you want to start looking at motivating our team right now,” Zadick said. “Going back to the in-state, Iowa State definitely has a lot of development to be done. I think we have the firepower in our program. I just think the development in their mind right now and get them to believe and having them open minded to the fact that they have to have a open mind to a different way of doing things. Do I think they are very capable, yes.”

Dresser has prided himself on hiring good coaches. If Zadick’s past is any indication, he has done just that with his new associate head coach.