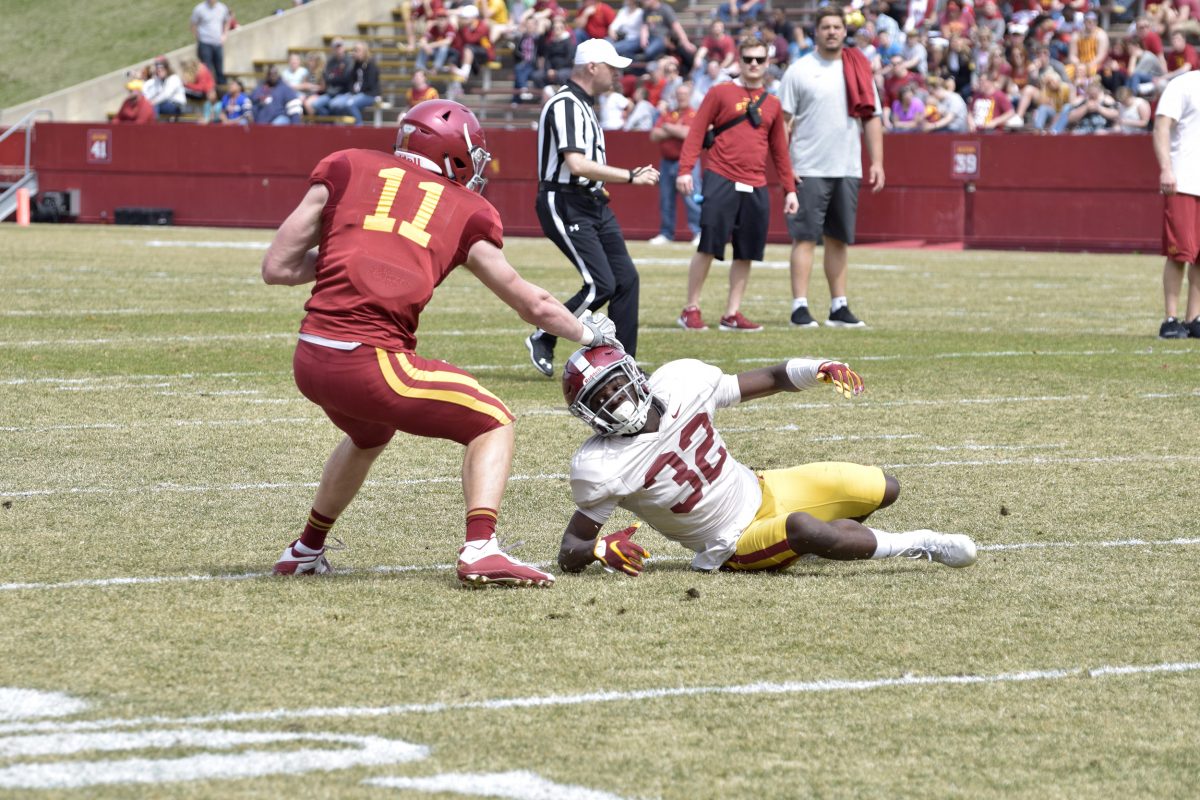 I’m not one to get too excited about a spring game.

I find more value in roaming the sidelines, talking to people and taking in the atmosphere than I do in what’s happening on the field. I spent the entirety of Iowa State’s spring game on Saturday doing just that.

Being on the field gave me an opportunity to talk to some people that know a lot more about football than I do. The one question I’d ask them is, “Which young players have stuck out to you the most?”

I don’t necessarily mean exclusively on-field performance, but guys who stuck out as physically impressive. There were four names I heard come up in multiple discussions.

The inclusion of Allen shouldn’t come as much of a surprise to anyone whose followed Iowa State football over the past year. Ever since the Nixa, Mo. native signed with the Cyclones last winter, people inside and outside the Bergstrom Building have raved about his abilities.

Saturday was Allen’s first opportunity to showcase his skills for the fans and he definitely impressed. Despite losing 20 pounds due to an illness in the fall, the 6-foot-6-inch, 230-pound tight end doesn’t look out of place on a college football field.

Allen only made one catch for 15 yards during Saturday’s scrimmage, but he showed the skills that have drawn rave reviews during that one play.

I have one major takeaway when it comes to Soehner. The dude is freaking huge.

The redshirt freshman is listed at 6-foot-7-inches, 283-pounds and those numbers definitely aren’t a stretch. He made a couple very impressive blocks during the scrimmage, including one that prompted Cyclone Fanatic contributor, and former Cyclone running back, Jeff Woody to demonstrate and drive me back several feet.

Soehner’s frame also makes him an easy target to find in the passing game. I have no idea how much he’ll see the field in the fall, but his physical makeup is very impressive for a redshirt freshman.

This one surprised me a little bit, but Lensing’s name kept coming up in my conversations. It sounds like he’s had an impressive spring and is finding his niche at defensive end so far as a redshirt freshman.

The 6-foot-4-inch, 227-pound South Winneshiek product only made one tackle during the scrimmage, but it sounds like he’s made serious progress since arriving on campus.

Iowa State is looking for someone to fill the second safety spot opposite of Kamari Cotton-Moya and I wouldn’t be surprised to see Grant in the equation. The 6-foot, 190-pound redshirt freshman was the defensive scout team co-player of the year in the fall and looks the part of a college safety.

He made four tackles in the scrimmage on Saturday and was around the ball quite a few other times. Iowa State will have a relatively experienced defensive backfield in the fall, but Grant is solidifying himself as someone that could see the field.