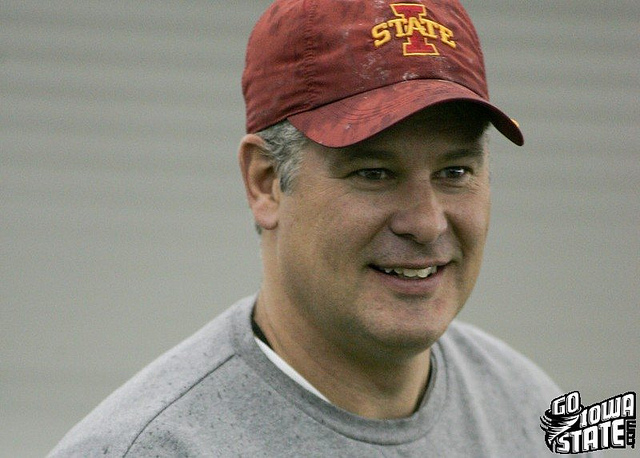 — Rhoads said that Jared Barnett and Steele Jantz are clearly ahead of redshirt freshman Sam Richardson right now at the quarterback position. Rhoads also added that Richardson is still in the mix and will compete for the job this fall.

— Rhoads mentioned that the performance of the quarterbacks in Saturday’s spring game was not reflective of what has been going on all spring long. Barnett, Jantz and Richardson all threw interceptions in the scrimmage. Barnett’s interception was taken 94-yards for a touchdown by linebacker A.J. Klein. Richardson was the only quarterback that threw a touchdown. It was a 6-yard pass to Tad Ecby.

— Rhoads called junior linebacker Jeremiah George the most improved player on Iowa State’s defense this spring. George recorded eight tackles in the scrimmage and led the Cardinal team with five.

— Rhoads said that senior wide receiver Josh Lenz had his most productive practice of the spring on Saturday. Lenz had seven receptions for 98 yards.

— In another wide receivers note, Rhoads also mentioned that over the last five practices, former quarterback Jerome Tiller had really proven himself at the position. Rhoads expects him to be a contributor in the fall. Tiller caught five passes on the day (while playing for both teams) for 44 yards.

— Wide receiver Albert Gary did not participate in Saturday’s scrimmage due to a knee injury that he suffered a  few weeks ago.