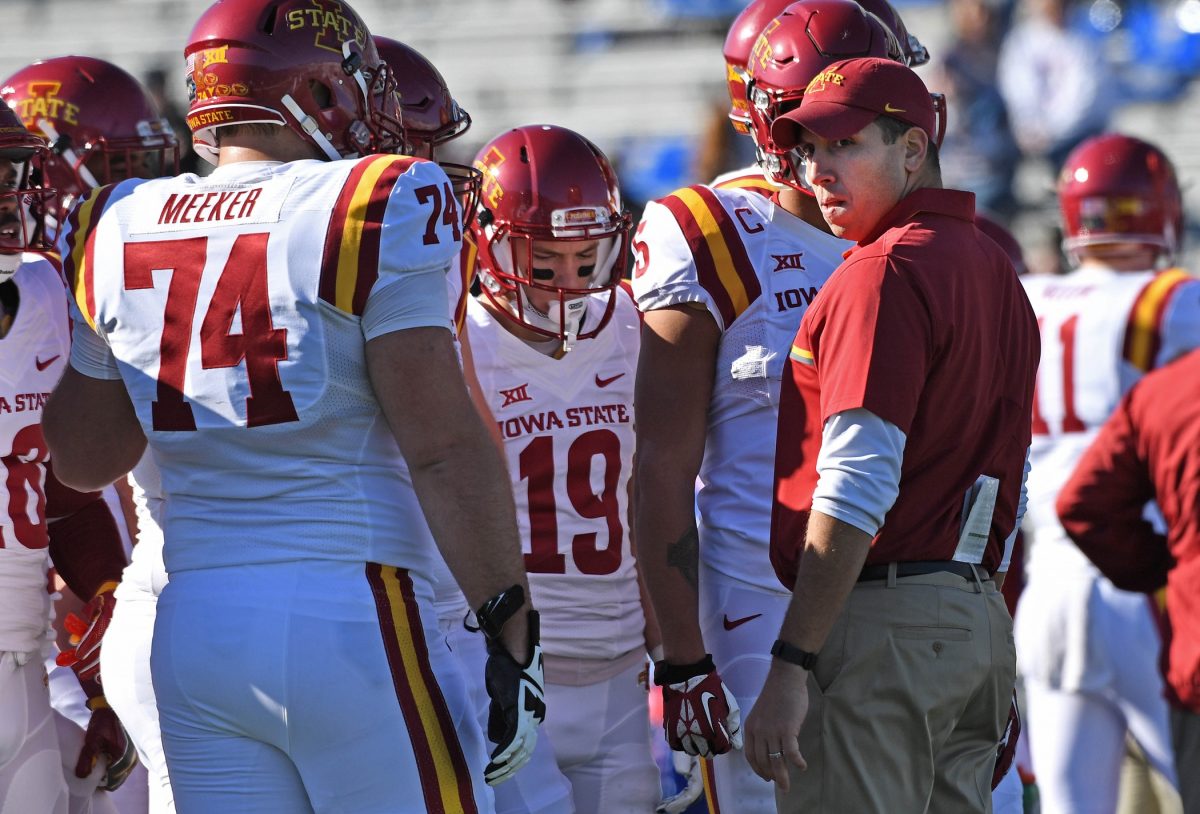 His instant analysis at the time?

“I’ll be honest with you,” said Campbell, whose Cyclones scrimmaged Saturday at Jack Trice Stadium. “I remember sitting on the field last year at this time — after the spring game — and saying, ‘Man.’ You knew we needed to continue to practice because we just weren’t there yet. But I think what you see right now is, you’re not afraid to go to the summer now, because you see these kids, and we’ve got some culture changer guys.”

Guys like converted senior quarterback Joel Lanning, who’s still growing — and impressing — at the MIKE linebacker position. Guys like Allen Lazard, who likely will rewrite several receiving records by the end of his senior season. Guys like senior safety Kamari Cotton-Moya, who’s bulked up about 10 pounds in the offseason and working back into full playing shape.

And the list doesn’t stop there. Campbell and his top assistant noted that leaders are emerging from each class, which bodes well for an ISU team intent on competing for a bowl bid in 2017 after suffering through four straight postseason-free seasons.

“Friday night and it’s eight o’clock, nine o-clock and there’s (receiver) Deshaunte Jones and (running back) David Montgomery and (defensive end) JaQuan Bailey and those guys are actually working on their own,” said Campbell, whose team’s annual spring game is one week away. “Then on Saturday mornings in the offseason, you see (quarterback) Jacob Park’s got all the receivers out there, (Cornerback) Brian Peavy’s got all the corners and those guys are working on their craft. Now you’ve got a chance. That’s what it takes, but it only gives you a chance.

“So to me, that’s the biggest thing. Last year you didn’t see any of that. That didn’t exist, but now all of a sudden you see guys starting to really understand what it takes and the true commitment that it takes to be successful and unfortunately this is a sport that it’s not just showing up from six to eight to be really good. You’ve got to be really willing to perfect your craft and you see guys really working and attempting to do that.”

“I told our defense I’ve been in a jersey scrimmage since 1991,” defensive coordinator Jon Heacock said. “The good news is our offense did not turn the football over and if that’s the case, we’ll win. The bad news is I coach defense and we didn’t get any turnovers and you can’t win that scrimmage without getting turnovers — if that ball’s not getting tipped up in the air and they’re catching every one of those things. So the blessing is, our football team, today we won, we didn’t turn the football over.”

Big plays flowed from both the backfield and Park’s charged arm.

“Primarily coming from our running backs,” Campbell said. “David has had a great offseason. I think he kind of got the ball rolling today with some big plays and Mike Warren — as I’ve addressed this before — has come back with a great purpose and I’m really proud of Michael. He’s had a really good spring and had a really good day today.”

“Got a couple in the throwing game that were big,” Manning said. “We missed a couple big shots down there as well, but what I was really happy to see was we made a couple of plays on the football down field that Jacob threw a good ball and tough catches (were) made. And I think sometimes when you don’t catch those balls that are 50-50 balls, you leave feeling kind of upset, but I think today they did a really good job of making plays on the football.”

**Redshirt tight end Chase Allen could allow the offense to play faster. Why? He’s proving adept at both blocking and route running — a well-rounded player showing out as good as advertised.

“Now you can have the ability, even on third downs, to stay in the same personnel and allow Chase to be a guy that can be a focal point to where you didn’t have to bring another receiver,” Manning said.

**Bringing in ex-NFL Pro Bowler LeCharles Bentley to help coaches craft expert training methods — particularly for the offensive line — has paid substantial dividends. Bentley and Campbell formed a bond years ago playing in all-star games together. Their relationship blossomed when Campbell took over at Toledo and has carried over successfully to ISU.

So the pieces are in place. Campbell feels much better than he did last season at this time, when he sensed many players were counting down to the end of spring ball, instead of looking boldly toward to their self-directed summer programs. That’s the critical juncture at which — as Campbell has said many times — “nobody else is watching.”

“From a mentality standpoint, from an attitude and effort standpoint, from a commitment standpoint, I’d say we’re on schedule,” Campbell said. “I’ve seen great growth in what we needed to do to be a better football team, but until those lights come on and you actually play, I think, again, you can do all that — all those things give you a chance, but until actually the lights come on and real football begins, any coach in the country is going to say, ‘Yeah, we’re right on schedule.’ I think I’m real enough to tell you that until that starts, until we get to that point, it’s a little bit of an unknown.”