AMES — Coming into this one, the Iowa State women’s basketball team knew it was facing a great opponent in the No. 2 Baylor Lady Bears. The final scoreboard showed just how good Baylor is, as Iowa State lost on Wednesday night in Hilton Coliseum, 83-52.

“Unlike any team we have ever played, when they see blood they are coming after you,” said Iowa State coach Bill Fennelly afterwards.

The game was a tale of two halves for the Cyclones.

Iowa State only trailed by seven points at halftime. In the second half, the Cyclones were outdone by 24.

Entering halftime Iowa State was only losing by three (18-to-15) in the rebounding battle and was shooting 48.3 percent from the floor. In the last 20 minutes, the Cyclones were beaten 28-14 on the glass and shot an abysmal 23.7 percent.

“We competed a hell of a lot harder in the first half inside than we did the second half,” Fennelly said.

Iowa State simply couldn’t respond to what Baylor was doing in the second-half.

“We had every shot we wanted on the perimeter and I thought defensively just switching on all those screens, not allowing (Iowa State) to dribble-penetrate,” said Baylor coach Kim Mulkey on how the Lady Bears were able to pull away in the second half.

While Fennelly was disappointed in his team’s second half performance, he was very please with its first half outing.

Iowa State was spreading the court and getting to the basket. At halftime, the Cyclones were tied with the Lady Bears, who tower over them, in points in the paint at 18. Iowa State was also executing its defensive game plan, with the exception of the Cyclones going ‘brain-dead’ on some inbound plays according to Fennelly.

Ultimately, the Cyclones couldn’t do what they needed to do to win. Iowa State is a team who loves to shoot the three. Against the Baylor, it went 3-of-18 behind the arc.

The height for Baylor can be accredited to the reason why Iowa State couldn’t get it going offensively.

“It’s really hard,” Fennelly said on how tough it is playing against Baylor’s height. “They are very, very physical. Every time you move, you get hit. The freedom of movement doesn’t exist in this game. You just have to play through it. When you do go by them, you are going by one big guy into another one.”

Fennelly knew heading into the game that Baylor’s height was going to be an issue. He needed his team’s best performance to have a chance against the Lady Bears. Fennelly just didn’t get for a full 40 minutes.

“If you don’t do everything perfect, you got no chance and we were far from that,” Fennelly said. 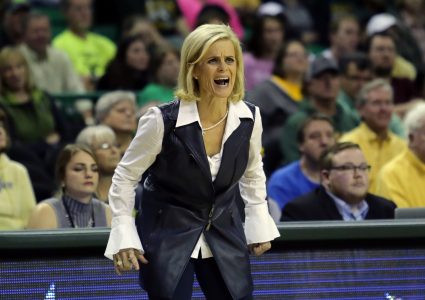