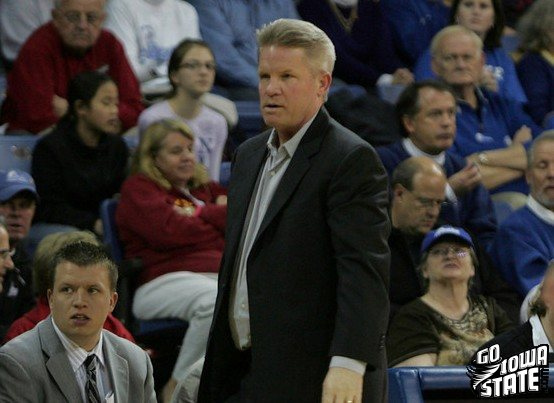 After playing the Lady Bears to a 32-32 draw in the first half, it was very important for Iowa State to get off on the right foot in the second half. The Cyclones did just that as a bucket and free throw from Nikki Moody, a 3-pointer by Hallie Christofferson and a driving basket by Chelsea Poppens put Iowa State ahead 40-36 in the early proceedings of the second period.

Baylor fought its way back in the game as they put together a quick 7-0 run via a dominant effort in the post. Odyssey Sims’ free throws with 16:12 to go put the Lady Bears ahead 43-40. The Cyclones tied it up the next possession on a Chassidy Cole 3-pointer, but Baylor put together another 18-2 run with a Brynn Williamson bucket being the only relief for the Cyclones as the Lady Bears soared ahead 61-45.

Iowa State would only be able to get the lead back down to 14 as the Cyclones had no answer to Baylor’s Brittney Griner. The star of the No. 1 Lady Bears posted a career-high 41 points on 15-of-18 shooting and grabbed eight rebounds. Destiny Williams joined Griner in double figures with 15 points and a game-high 11 rebounds.

Iowa State went into the game with the plan of making it a contest with the 3-pointer. Iowa State did not attempt a 2-point shot for almost 12 minutes to begin the game, with all of the Cyclones’ points up to that mark coming from the free throw line or 3-point range. The strategy worked early on as threes by Moody and Lauren Mansfield gave the Cyclones an early 8-6 lead. Griner began to take control as four consecutive points got Baylor back in front, but Moody responded with another 3-pointer to give Iowa State an 11-10 lead.

Baylor put together a 10-1 run capped off by a three-point play from Williams to give the Lady Bears a 20-12 advantage. The Cyclones continued to fight and eventually got the BU lead down 28-27 with five minutes to go in the first on back-to-back Prins 3-pointers.

Iowa State capped off the half in style as Poppens drained her first career 3-pointer to tie the game at 32-32 going into halftime. It marked only the fifth time all season Baylor had not been in the lead at the half.

Iowa State has concluded the regular season portion of the schedule and will continue its season next week at the Phillips 66 Big 12 Championship in Kansas City, Mo.

WBB: Baylor blows out the Cyclones