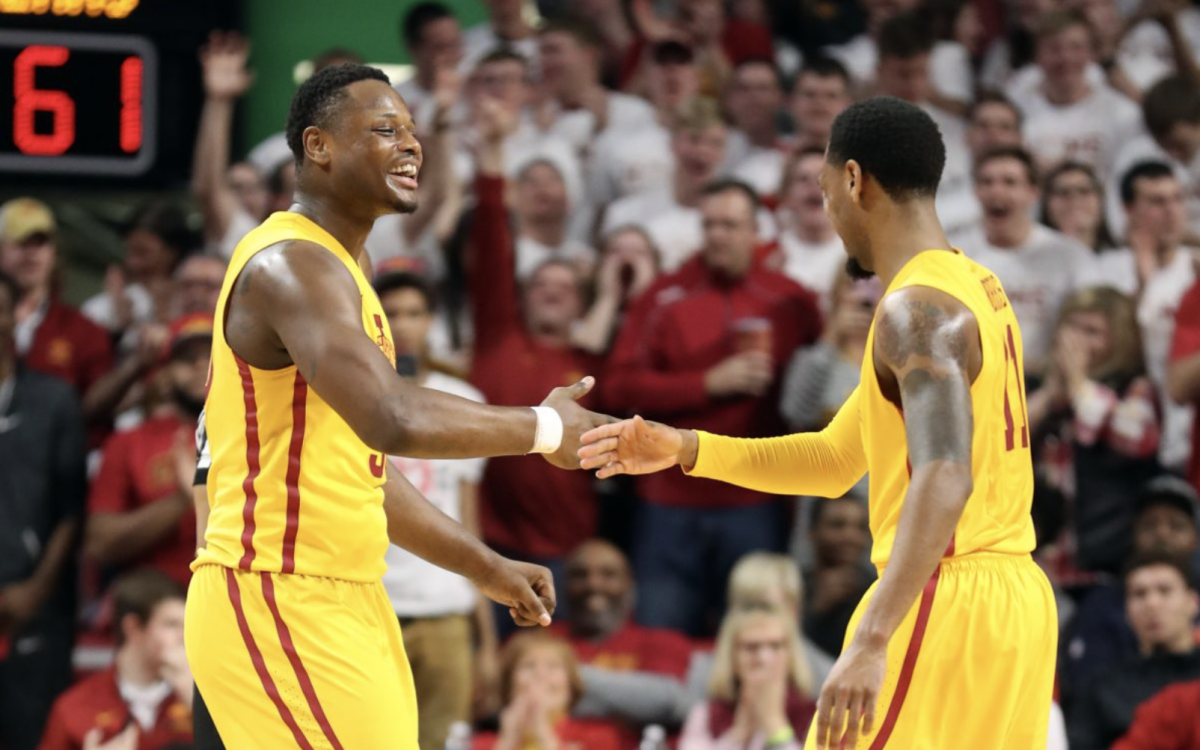 AMES — No one remembered the play call.

Everyone simply held their breath, eyes wide, as Deonte Burton boldly hoisted a 3-pointer from the top of the key, early shot clock, with 1:16 left.

Key question, though: Did the combustible senior call glass?

“No,” Burton said flatly after helping Iowa State end a five-game skid against No. 9 Baylor Saturday at a sold-out and amped-up Hilton Coliseum. “The bank was open.”

Burton’s bomb gave the Cyclones a two-possession lead — and punctuated another white-knuckle 40 minutes of Big 12 basketball against the Bears.

How it ended up that way is anybody’s guess, as the Bears’ King McClure was able to get up a potential game-typing 3-point shot at the buzzer that fell short.

Strange game (aren’t they all?), this one. Baylor, as expected, dominated the glass, outrebounding the Cyclones 37 to 17 and outscoring them 28 to 2 in second-chance points.

But ISU (19-9, 11-5) won its fifth straight conference game by shooting a torrid 58 percent from the field and losing just five turnovers. The Cyclones also made all but one free throw … until missing three of four in the final 13 seconds to rekindle the Bears’ hopes.

“We just wanted to come out and move the table a little bit,” said Morris, who scored 17 points while dishing out seven assists without a turnover. “We always (get) hit in the face by Baylor, so we tried to come out and man up and change things tonight.”

Last season at Hilton, The Cyclones let an 11-point second-half lead fade in a loss to the Bears.

This time around, ISU stretched the lead to eight with 22 seconds left before Ish Wainright and Al Freeman drilled threes to turn the final ticks into nerve-fraying moments.

“It’s tough,” said senior guard Naz Mitrou-Long, who scored 10 points and doled out at least five assists for the ninth time in his storied career. “You get out-rebounded by 20, I mean, guys are usually looking at the box score like you took an ‘L’ by 20. But we didn’t and we’re fortunate enough to have the guys that we have and have the talent that we have to get us through games like that.”

Burton starred early — before his high-arcing run on the bank — cashing in for 15 first-half points. He also rose up for three blocks, while freshman post Solomon Young swatted away two.

Young finished with 11 points on 4-for-4 field goal shooting and managed to stay out of second-half foul trouble despite tangling with the likes of Johnathan Motley, who scored 27 points while grabbing 11 rebounds. Young also played all 20 minutes after the break.

“In this league, you’ve just got to kind of juke them a little bit or just get better position,” Young said. “So as we play more, I’m starting to learn.”

Just as the rest of the Cyclones finally found a way to solve the Baylor conundrum. It started with their mantra, “heart over height,” but Burton’s unplanned encounter with the backboard didn’t hurt.

“We were due one of those, though,” said ISU coach Steve Prohm, whose team has won six of its last seven games.

“Blessed,” said Burton, who scored a team-best 22 points and became the second player in ISU history to record at least 40 blocks and 40 steals in a season.

Drew called Burton’s perfectly-angled shot “the play of the game.” It helped end a skid, anyway. Now it’s on to the hottest team in the Big 12 if not the country, Oklahoma State, which will visit Hilton for Tuesday’s 8 p.m. Senior Night showdown.

The Cowboys have won nine of their last 10 conference games. The Cyclones have won six of seven. Different streaks, same sights.

“We just want to ride this wave,” Mitrou-Long said, “and continue to get great.” 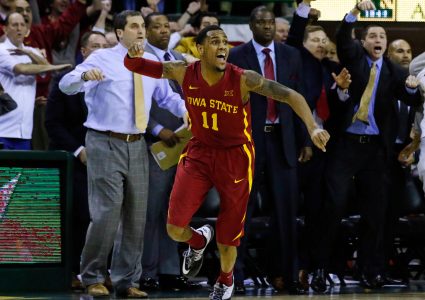 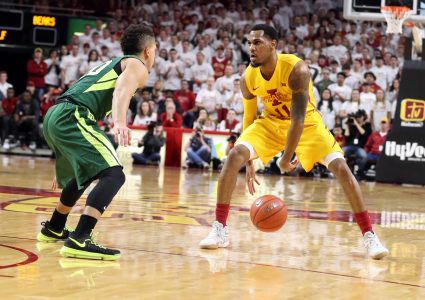 Cyclones top No. 9 Baylor in thriller