Here’s what Campbell had to say about each of the new additions:

Leo joins Iowa State after a two-year career at Arizona Western Community College. The native of Australia began his post-high school athletics career as a professional rugby player, but moved to America in 2015 with roughly $12 thousand in his pocket and a dream to play football.

After walking-on at A.W.C.C., he spent most of his freshman season learning the game then caught the eye of the Iowa State coaches during the spring of 2016. After Iowa State tight ends coach Alex Golesh watched Leo during a practice in the spring, the Cyclones extended an offer.

The 6-foot-7, 265-pound prospect would prove to be a legit talent during his sophomore season while earning a three-star rating by 247Composite. He’s the No. 6 JUCO weak-side defensive end and No. 46 JUCO prospect in the country.

“This past year, you just see his film and every game gets better and better and better,” Campbell said. “He’s got really good technique. He plays with relentless effort and those are things that really were impressive to us. Coach Golesh went out and saw him practice last spring and I think came away really, really impressed. That’s why we offered him last spring. Really just started to develop a great relationship with Matt. I do think there’s a lot of growth in his potential going forward, but I think you already see the amount of growth he’s been able to make. You’re not talking about a young man. You’re talking about a 22, 23-year-old person that is a guy that’s already got great ability and will just be fun to continue to watch his development.”

The 6-foot-3, 310-pound defensive tackle will fill an immediate need for Iowa State in the interior of the defensive line. The El Camino College product picked the Cyclones over the likes of Arizona, TCU, Cal, Oregon and a handful of other schools.

He’s the No. 7 JUCO defensive tackle in the country and No. 58 player overall, according to 247Composite. Lima also might have been the most highly-recruited of the three early signees as multiple schools were trying to flip his commitment, which he made on August 7, up until the final days before his put his signature on paper.

“I think Ray’s got everything you want in an interior defensive lineman,” Campbell said. “He’s got elite twitch. He’s got really good length, 6-foot-3 almost. He’s got a really good wing-span. But, I think, the best thing about Ray Lima is who Ray Lima is. Again, he’s a guy that he’s got every factor in terms of leadership. He plays with elite effort. He’s a guy that loves the game of football. Really passionate about what he does. He’s got the ability to win the one-on-one pass rush inside, but yet he’s so big and strong and physical that he’s a really good run defender. Ray was fortunate where he’s a three-for-three so he’s a guy that you’re going to get for the next three years, which I think is exciting for all of us to have a guy like that around. It’s almost like getting a high school player. He’s a guy that has all those intangibles. Again, another incredible story. Just a young guy from a really neat family, a really neat background. How he’s gotten to this point is really impressive. He brings a lot of intangibles and was almost a must need for this football program and was a huge get for us.”

After redshirting this season at El Camino, Lima will have three seasons of eligibility left once he gets to Ames.

Perhaps the least talked about player in Iowa State’s whole recruiting class, Eaton is rated as a three-star prospect by 247Composite. The 6-foot-4, 205-pound pass catcher is the No. 10 JUCO wide receiver in the country and No. 100 prospect overall.

His situation is unique as he started his college career at Temple, where he spent his first two seasons, and started as a true freshman. He then transferred to Pearl River C.C. in Mississippi, in part due to P.R.C.C. wide receivers coach Kelvin Bolden, who Eaton had trained with previously.

In the first game of the season, the team’s starting quarterback suffered an injury that prevented them from being able to effectively pass the ball most of the year. For that reason, the fact that he put together a season with 392 receiving yards on 37 catches, and two touchdowns, was better than solid.

The talent Eaton displayed at the JUCO level was good enough to earn late offers from Auburn, West Virginia and a handful of other programs. It was also enough to make Campbell sweat until the second the fax machine came to life with Eaton’s NLI.

“Let me tell you, last Wednesday wasn’t the most comfortable day to be the head coach here, but to be able to hit on all three guys was incredible,” Campbell said. “When you really get to see Matt, you’re all going to be really impressed. He’s 6-foot-4. He’s an elite route runner. Played in, from his standpoint, went with somebody that he knew in terms of his position coach, but didn’t play on the best junior college team that can showcase his skill set, but I think when you see his skill set and his ability, Matt’s the best player we saw on our recruiting board at the wide receiver position. I think you’re going to see why really fast because he’s got elite size, he can go up and get the football, he’s a great route runner. Again, I think he’s just another guy that can come in and really stretch field vertically for you and kind of be a go-to guy. When you have that in different places, now it’s not just one guys getting the ball all the time. Deshaunte (Jones) kind of opens some things up for us in the middle of the field and took some pressure off of Allen (Lazard). To have another guy that you can really invest in and trust in. We’ve got Hakeem (Butler), who really started to come on at the end of the season, which could be exciting for us. Then to get Matt in there too, now all of a sudden you get a chance to really have depth and you’ve got some guys that the ball can spread around.” 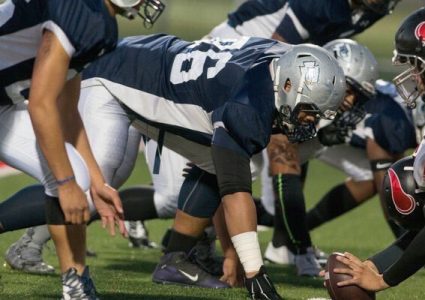