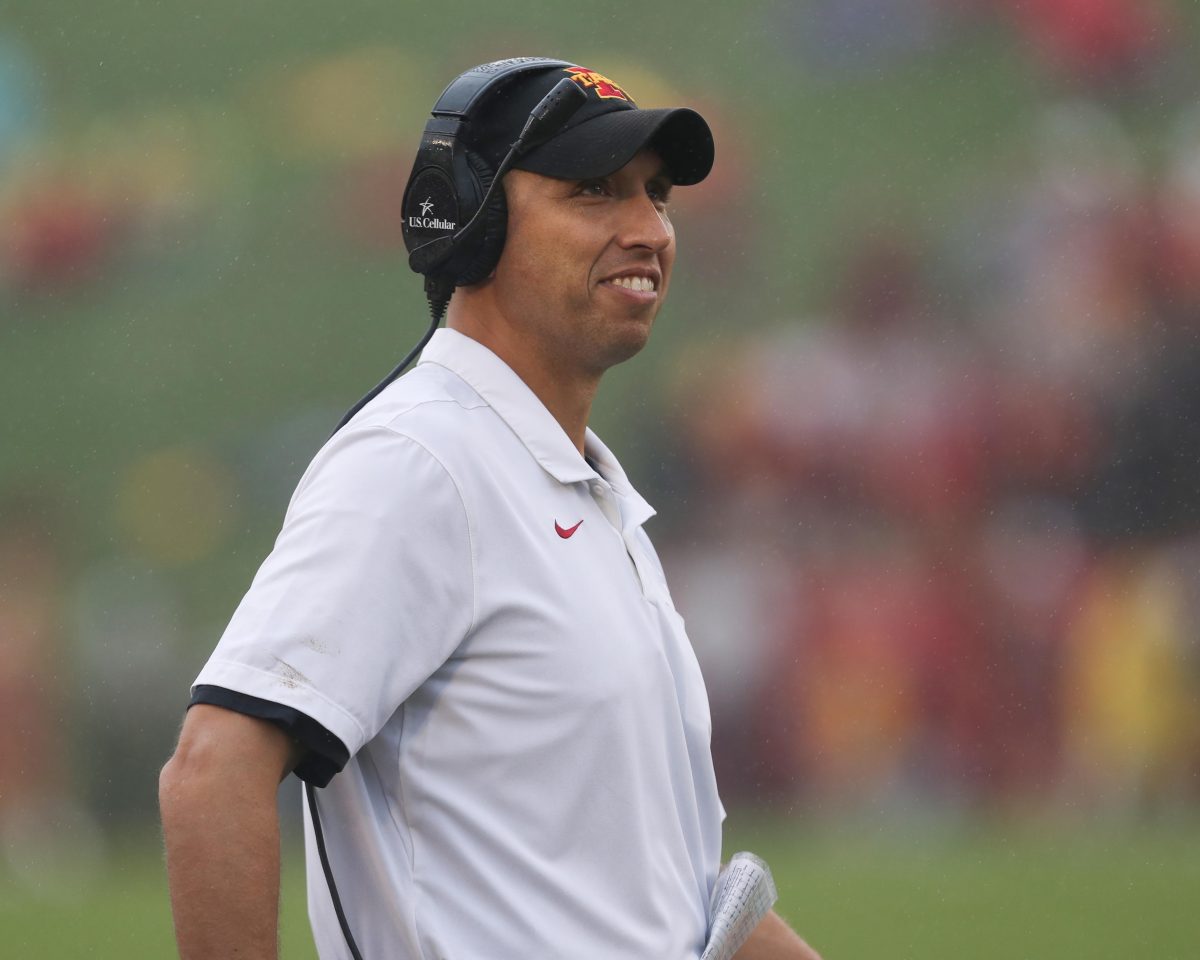 Iowa State head coach Matt Campbell got an opportunity to talk about his program’s top-40 recruiting class for the first time on Wednesday evening. Check out what the Cyclones’ head man had to say about junior college prospects Xavier Hutchinson and Latrell Bankston, the program’s two quarterback prospects and more below.

“I’ll be really honest with you. I don’t know if there’s a better wide receiver in the country right now coming into a college football program than what Xavier is. I think you saw that in his recruiting towards the end. If you go and watch the videotape of his sophomore year at Blinn, it’s as good as any videotape that I’ve ever seen of a wide receiver that we’ve had the opportunity to recruit. I give Xavier a lot of credit, him and his family, for staying loyal to us. We’ve developed a great relationship with the family, with Xavier. He’s a guy that’s got kind of that size that you’ve seen from a Butler and a Lazard but the speed and athleticism of maybe some of our really talented skill players. He’s got a lot of dynamic to him. He’s a guy who comes in and gives you certainly what a one receiver potential looks like. We’ll be really anxious to get him here and see kind of where he fits and how he fits into our wide receiver group. We’re really excited about Xavier.”

“I think Latrell’s one of those guys that you talk about who maximized his full potential. He’s the national defensive player of the year in junior college football. He’s a guy who had unbelievable success in his time both last year and this year. Certainly, a guy who comes in and competes with some really good players in our program right now. I think one of the things that were really exciting about the defensive line, in general, is again it’s another year where we were able to really bolster with the top guy on our board at every spot, which is hard to do, and we were able to do it in this class with all three of those guys. Really, really excited about that. Really comfortable with being able to get Latrell here, again, a young man who comes from a great family, a young man who has had to overcome adversity early on, lost his mother midway through his high school career and he’s a guy who has just persevered through it. A guy that has a strong purpose of what he does. We’re really excited about Latrell. He will do a phenomenal job for our football program.”

“D’Shayne’s a young man that is obviously really talented. Had a really tough injury his senior year of high school. One of the things that we wanted to do in the benefit of D’Shayne makes sure that when he started his clock here at Iowa State when he officially enrolled here, he was 100 percent healthy for his benefit. I think it worked out great. You’re seeing a guy that worked out, is 100 percent, kind of got cleared probably three months ago. He’s been kind of back home right now, actually helped coach his high school football team, which we obviously know and have a great deal of respect for his high school football coach. So I just think really eager to get here and ready to go. Where Dae’Shawn was a little bit different. Dae’Shawn was at Iowa Western and enrolled there for a semester. He did not actually participate in their games, but kind of redshirted there for the fall semester. Got to take some college classes, which I think was really good for him. Obviously, with him being a full qualifier has allowed him to come here and be ready to go. Really excited about both of those guys. Think both of those guys are certainly impact football players and guys that make our football program better the day they walk on campus.”

“I think, No. 1, I don’t know if you could be more blessed to be able to have two guys like this coming into your football program in terms of quality, character, winning, leadership. I think those things were no doubt about it for us in terms of this process. I think the numbers aspect of the quarterback position still with Easton (Dean) moving from quarterback to tight end, which I think is going to be a huge benefit for this football program. He’s had a phenomenal fall and really a great fall camp at that position. I think that’s truly home. I think once we felt that was going to be the move, bolstering our numbers of getting the right guys and making sure that quarterback room looks the right way was really important to us. To be able to be fortunate enough to get a guy like Aidan, who has been with us a little bit over a year in terms of committed to Iowa State, we have an unbelievable relationship with him and his family. A guy that we really believed in from the day we had an opportunity to watch him throw as a junior and watch him come to our camp and watch him lead and empower people around him. He’s a special young man in that aspect. I think he’s got a high football IQ in terms of what he does. Then you flip over and you talk about Hunter, Hunter’s a guy who came to our camp as a junior then grew two inches from his junior year to his senior year. When he came into camp in the summer, I said this, I don’t think anybody’s ever had as good of a football camp coming into our camp and actually demanding a scholarship as what Hunter Dekkers did when he came here in the summer. His leadership, poise, his confidence, the success that’s he had in every aspect of his life. He’s an elite competitor. I think all of those things we really loved about him. To come here and, it’s like you hear me say all the time, make me play you, well it was almost like, ‘How could you not say that this was a guy that can come here and compete to be a quarterback in your program?’ I think both guys have elite intangibles. Both guys have a great friendship. It says everything about our program that both young men want to come here and not only wants to compete but make our football program better. I’m really excited about that. I think those two are pillars in this class for us.”

On the defensive tackle group Bankston and JR Singleton join

“I think that will be really interesting as we get into it. You’ve got Josh Bailey coming back, Isaiah Lee coming back. Both guys that are like some of the other guys in some of our rooms that have waited for their opportunity, but when you have two guys like Ray and Jamahl that are playing all-conference caliber football, it’s hard to crack the lineup. I think those two guys have just been waiting for their opportunity and developing. Now, you talk about, you bring in a guy like Latrell, and you talk about a guy like JR Singleton, really JR Singleton, I don’t know if there’s a better football player in this entire class. You’re talking about what that kid did, he led his high school team to the highest class state championship in Illinois, you’re talking about a guy that’s broken every barrier in terms of what he did and now he’s the defensive player of the year in Illinois. You’re talking about a kid that did it at defensive tackle. You’re talking about a kid that’s as special of a character as anybody in this class in terms of leadership and talent coming into our program. I think there will be great competition. I think it will be fun to watch that group evolve. I think those guys do things that are completely different than what our two guys do now. Yet, they have some of those same traits and characteristics that make elite nose guards. It will be fun to watch that group and that battle start to happen. Some of it will happen this spring and then when JR gets here, I think it will all come together as we get into fall camp.”

On the offensive line class

Those are kids that we’ve had great relationships now being at the same place for two or three years. Both Brady (Pedersen) and Tyler (Miller) are guys that it almost feels like they’ve been here for two years. They’re at every game, they’re around all the time, they’re guys that you watch them and what they did their senior year and you’re like, ‘Man, we’re really fired up to have two of the best, not only in the state but two of the best in the Midwest.’ I think both have high-end potential. They’ve got the potential to be great players. You talk about Sam (Rengert) and Hayden (Pauls). You know, Sam, to be able to go into Ohio and get a kid that was really highly recruited in that state and a guy that played every snap on defense, played on half the special teams and then also started on the offensive line. His ceiling is through the roof with size, potential, mobility. Hayden’s a guy, again, too, this guy has been committed to us since the summer, but had an elite senior year. I think what you hope is when you turn that senior videotape on you say, ‘Man, did those guys commit to Iowa State and get worse or stay the same or really improve?’ All four of those guys had incredible senior years. I think they’ve shown they have the mentality to come in here and get themselves ready to go. Obviously, Tyler and Hayden will be mid-year guys so it will be great to have those guys in the weight room, nutrition, and spring practice. That will be really beneficial for both.” 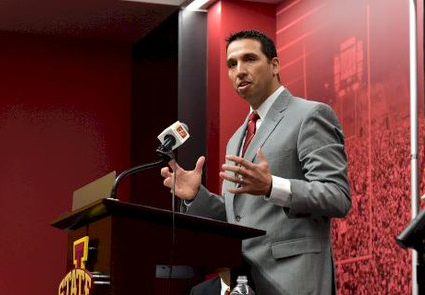