AMES — Chris Francis trained for this.

“I was ready to run it,”said Francis, who recovered his own onside kick to start the second half and inject some life — albeit not enough — into a smake-bit Cyclones team that lost to Kansas State, 31-26, Saturday at Jack Trice Stadium. “It takes a certain type of person to be able to know you’re going to get hit and to go believe that you’re going to hold onto that. I was fully prepared — and truly believed I was going to go get that ball.”

Unfortunately, not everyone else was able to execute so flawlessly.

Francis’s recovery fueled a touchdown drive capped by Jacob Park’s 24-yard scoring strike to Deshaunte Jones that pulled ISU (1-7, 0-5) within seven, at 17-10, with 12:08 left in the third quarter.

“Huge,” said Allen Lazard, who led the Cyclones with eight catches for 134 yards.

But not big enough.

The defense couldn’t get off the field on third and long twice in the ensuing series and hope gave way to a 31-10 deficit that a 16-point fourth-quarter comeback failed to erase.

The Wildcats (5-3, 3-2) converted on third and 10 and third and 14 while marching 14 plays for 85 yards to restore a two-touchdown advantage that eventually swelled to a 21-point edge.

“I said our whole game plan was we’ve got to do a great job on first and second down — and we didn’t do that in the first half at all,” said Campbell, whose team has lost four games by a seven points or less this season. “But in the second half, we start that drive, we get the momentum back in the football game, we start that drive and we have opportunities.”

Particularly after the onside kick and subsequent touchdown that the defense couldn’t build from.

ISU nearly forced a three and out immediately, but K-State quarterback Jesse Ertz competed an easy slant to Deante Burton for 12 yards.

Five plays later on third and 14, Ertz scrambled for about 13 yards before being stopped. But instead of facing fourth and one at the K-State 39, an iffy late-hit call on Brian Mills automatically extended the important drive.

“Those are things, again, we’ve got to sit and look, you know, is it player, is it scheme, how can we be better?” Campbell said. “I think (the Wildcats) were outstanding — 8 of 12 on third down — and first half, a lot of those are easy. It was third and one, third and two, third and three. That’s their wheelhouse. Second half, like I said, some those are third, and 10 third and 10, third and 15. So we’ve got to be better.”

K-State converted eight of its first 10 third down opportunities into new sets of downs. Five of those in the first half came on third and two or third and one. All led to points — as did a Park interception — while the Wildcats built a 17-3 halftime lead.

“We have to play together more as a team,” said ISU safety Kamari Cotton-Moya, who led his team with nine tackles and two pass break-ups. “When we do that, everything will become easier and more smoother.”

They did it in the fourth quarter, forcing the Wildcats to misfire on third down twice.

That allowed the offense to revive behind Park’s arm and Joel Lanning’s legs (and a nearly successful onside kick from Cole Netten), but it was too little, too late.

Tackling remained an issue, as well. Before halftime, K-State frequently eluded ISU’s first would-be tackler at the point of attack.

That changed somewhat after the break, but magnified a problem that’s bedeviled the Cyclones this season.

“We’ve got to tackle better,” Campbell said. “I just think it really became more detail-oriented in the second half. I really think you’re going to get to film and you’re going to say, ‘We just played better in the second half.’ And that’s where it goes back on me. And me as the coach, and me and our staff, we’ve got to get our kids to play better football than what we did in the first half of the game.”

It must happen fast.

The Cyclones won’t be coming off a one-week break from games when high-powered Oklahoma jets into Ames for Thursday’s 6:30 p.m. ESPN-televised game under the lights.

So the road gets tougher and the margin of error thins. Again.

“I think Thursday games are great,” Cotton-Moya said. “Part of football. Part of what we signed up for. So I’m looking forward to playing Thursday against a great Oklahoma team. Looking forward to get better with my teammates this coming week. … We’re not losing faith, we’re not losing hope, anything like that. Coaching staff’s going to put us in the right place and we’ve just got to execute the plan.” 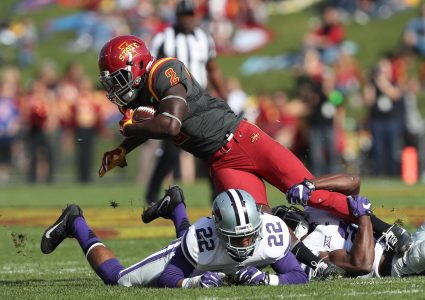