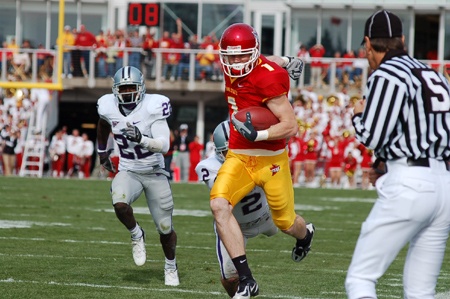 After redshirting in 2003, Todd Blythe emerged in 2004 as probably the best wide receiver to ever don the cardinal and gold uniform.

Blythe led the team with 833 receiving yards and nine touchdowns on 39 receptions during his redshirt freshman season.

The Indianola native’s season was highlighted by a 51-yard fourth-quarter catch against Kansas State that helped engineer a Cyclone comeback. Blythe also made eight catches for 188 yards in just the first half of a win over Nebraska.

Blythe was a crucial member of the 2004 Iowa State team that went on to beat Miami (OH) in the Independence Bowl.

Blythe’s 833 yards during his redshirt freshman season is still fifth in program history for receiving yards in a single season.