I need to catch my breath after this weekend.

I can’t imagine I’m in the only one thinking that on this Monday morning. This was one of the most eventful sports weekends I can remember in quite a long time.

Of course, it all happened while our fearless publisher, Chris Williams, was away for the first two days of his vacation. It only made sense that less than a few hours after his flight took off, the Cyclones picked up their first of three weekend commitments.

That’s why I wasn’t a bit surprised when I found out that Jefferson, Georgia, offensive guard Caleb Chandler had committed to Iowa State on Sunday morning. I even had a feeling we could be in for a busy Sunday when I left the Saturday Night Lights camp.

Assuming he holds his commitment until February, Chandler would be the first four-star high school recruit (of the Scout era) to sign with Iowa State from a state outside of the Midwest.

The Cyclones have signed eight four-stars, six of them high school recruits, since the beginning of the Scout era in 2002.

Matt Campbell said during his opening press conference that he planned to turn Iowa State into the Big 12’s Midwest school. He didn’t say anything about opening the door to SEC-country.

The narrative for the longest time has been how difficult it is to recruit to Ames. It isn’t any secret that getting kids to just visit ISU can be the biggest battle.

With that said, once kids get on campus, Iowa State has as good a shot as any.

That is proved by this staff getting Chandler, a kid that had never been on an airplane before this weekend, to fly to Ames for one day, then commit before getting on the plane to head home.

These guys know what they’re doing.

*** That sentiment was doubled up less than an hour later when JUCO cornerback Octavious Morgan made his commitment to the Cyclones.

The 6-foot, 200 pound, prospect didn’t really seem to have much interest in playing around during the recruiting process. He’d picked up offers from Baylor, West Virginia, Kansas State and a handful of others, but he was set on finding a home quickly.

Considered by some to be the best JUCO defensive back in the country, Morgan figures to step into an immediate role in 2017. Iowa State’s move to a 4-2-5 defense puts even more emphasis on strengthening the defensive backfield and this moves goes a long ways.

He’ll graduate in December then arrive in time for the spring semester in Ames.

*** The first commitment of the weekend was the one that surprised me the most. Not that I was surprised Tennessee transfer Ray Kasongo picked Iowa State. I just wasn’t expecting it at the time.

I’d say the best way to describe the 6-foot-8-inch, 245 pound, forward is as a project. I’ve had multiple people tell me that he’s an absolute freak athlete but I think there’s something left to be desired when it comes to his skills on the offensive end.

This next year will be huge for his development and it will be extremely interesting to see how he progresses before he takes the floor at Hilton Coliseum in 2017-18.

*** I have to say that I’m thrilled for the city of Cleveland, LeBron James, Kyrie Irving, Tyronn Lue and everyone else involved with the Cavaliers’ run to the NBA Championship.

Before the playoffs, I leaned toward Golden State but I couldn’t fight this feeling that it was LeBron’s year. As the playoffs wore on, I found myself actively rooting against the Warriors.

I don’t have any reason for that except for wanting to see the Cavs do it for “The Land.”

After three titles, three Finals MVPs and five regular season MVPs, I think we can finally stop debating the greatness of LeBron James.

*** I don’t have any facts to back this up or anything, but I think Georges Niang will hear his name called during Thursday night’s NBA Draft. I just have a feeling that some team will, rightly, take a chance on the former Cyclone star.

*** I’ll have a not so special guest on this week’s episode of The Seniors.

Rob Gray is away drinking scotch and IPAs next to a lake so I’ll be joined by my freshman roommate, Leif Olson. I’m not going to lie to you and tell you he’s an Iowa State expert, because he isn’t.

I think you guys will like him, though. He’ll do his homework and he’ll, usually, be an educated voice. He also has some ridiculous takes on superheroes so he’s good for that if nothing else.

MONDAY MUSINGS: About all that madness 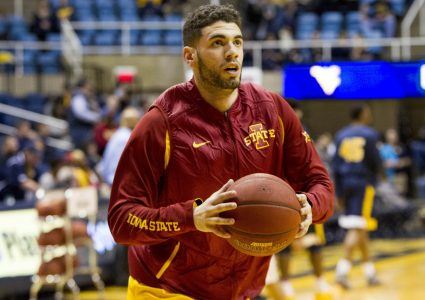