CHICAGO — The “season is over” column is never a fun one to write. This year, it was way worse.

For years, every single one of you reading has dreaded this moment but unfortunately, it is time: Following a not-so-impressive 84-71 loss to Virginia in the Sweet 16 on Friday night, Iowa State fans must now say goodbye to one of the all-time greats and with that, the thought of seeing their school play in its first Final Four since 1944.

Georges Niang, you are the G.O.A.T.

“What this journey has meant to me with everything that I’ve been though, I wouldn’t trade it for the world,” said Niang, who scored a game-high 30 points said afterwards. “I just want to say thank you to everybody who is a part of this for making my career here so special.”

No, Georges. On behalf of the Fanatics, thank you.

Thank you not only for your accomplishments on the hardwood but for the way that you have always represented Iowa State.

“I’m happy that I can go out saying that I gave it my all,” he added.

That’s exactly what this two-time All-American did vs. an imposing Virginia team that was firing on all cylinders. He didn’t get a lot of help and caught some tough calls along the way, but Niang’s craftiness singlehandedly kept this game (that Iowa State never led in) from being a laugher.

The best word to put a bow on the 2015-16 Iowa State basketball season?

“We won some big games but lost some at home that we shouldn’t have too,” said junior point guard Monte Morris.

“Brutal” is how I would describe the start of the year – not in how the team performed but the atmosphere around the program when you combine the preseason expectations with off the court adversity.

Naz Mitrou-Long going down for the season was a dagger to this program’s hopes of a Big 12 regular season championship. It’s hard to put into words how valuable Naz, who is basically a player/coach on the floor, is from a leadership standpoint.

It took the Cyclones about a month to learn how to play without him.

It took the Cyclones about two months to completely buy into their new coach.

The lack of depth hurt and as Niang told me after the game, the team was fractured at certain points throughout the year.

That was all cleared up when the calendar turned to March though. Iowa State made its second Sweet 16 in three years while going to a school record fifth straight NCAA Tournament along the way.

Ask anybody within the program now and you will get a remarkable review of the vision that Steve Prohm has now established.

But we have all offseason to talk about next year. Tonight is about Niang and his fellow seniors, Abdel Nader and Jameel McKay, who played their final game wearing the Cardinal and Gold too.

Those two young men are great stories as well.

Nader, who was too distraught to speak to the media following the game, probably grew as a human being more than any player on the team from last year compared to now.

McKay, who very publicly faced his share of adversity, told reporters after the game that Prohm’s discipline made him a much better man.

With two seconds to play in front of an Iowa State heavy United Center, Niang checked out of a game for the final time in a Cyclone uniform. Of course, he received a much-deserved standing ovation.

“That was really hard,” he said. “It didn’t hit me until I got to Naz. That was it. I told these guys already but I don’t expect anything less from these guys next year. I expect them to use this as a stepping-stone and to reach for bigger and better things.”

After postgame handshakes, Niang emotionally blew the Cyclone faithful a kiss on his way out of the arena. He wanted this messaged passed along to the fans too.

“I could never pay them back for the memories, the laughs, the hard times and everything,” Niang said. “All of the support. I owe them the whole world and I don’t know that I will ever be able to repay them.” Niang is a once in a generation player – a once in a generation guy. There has never been an Iowa State student-athlete – not even Fred Hoiberg – who has been able to combine an elite level of success while being able to connect with fans like Niang did. He used tools (that earlier Cyclones didn’t have) like Twitter to his advantage. He was clever, often snarky, and smart.

“You just don’t replace Georges Niang,” Prohm told me after the game.

No coach, you don’t.

You can’t, because there will never be another Georges Niang and that’s ok.

Personally, I’m not even sad that he is moving on.

It’s been one hell of a ride. 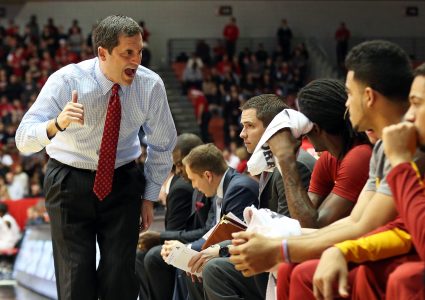