The Cyclones were led by huge outings from Seanna Johnson and Bridget Carleton, who posted 28 and 27 points, respectively. Jadda Buckley also tallied her third-career double-double, notching 13 points and 12 assists to go along with just two turnovers.

Texas Tech opened the game by knocking down four of its first five shots, but the Lady Raiders’ early 12-2 lead did not last long. Bridget Carleton knocked down a three-pointer and then assisted on one to Seanna Johnson to cut the deficit to four points. Coming out of the first timeout, the Cyclones switched to a man-to-man defense, which held Texas Tech scoreless for the last 3:23 of the quarter as Iowa State put together a 7-0 run. Johnson’s 10 points and four rebounds led the way for Iowa State, which trailed after the first quarter, 21-18.

The Cyclone run carried over into the second quarter as well, as Iowa State opened the period on a 13-5 run to amass a 20-5 run across the quarters and take its first lead of the game. The teams traded blows the rest of the quarter with neither squad pulling away by more than five points. Entering halftime, the Cyclones held a 46-43 lead over the Lady Raiders.

Iowa State shot 9-of-16 from deep and converted on all five free throws in the opening half. Carleton led the Cyclones led 19 points and five three-pointers at halftime, while Johnson had 16 points and six rebounds. Point guard Jadda Buckley entered the break with seven points and nine assists.

With 5:30 to play in the third quarter, Buckley converted a layup in the paint to reach 11 points on the night to go with her 10 assists at that point, marking her third-career double-double. Just over a minute later, Johnson knocked down her fourth triple of the night to give the Cyclones 200 made three-pointers on the season for an NCAA-record 13th-consecutive year. As was the case in the second quarter, neither team led by more than five points in the third. At the end of the period, Iowa State and Texas Tech were tied up at 63-63.

While Iowa State’s hot shooting from beyond the arc began to slow down in the final quarter, the team picked up steam at the charity stripe. The Cyclones hit 9-of-10 from the line in the first six minutes of the quarter to create a three-point cushion with just under four minutes left. The Lady Raiders used the offensive glass to rattle off a quick 5-0 run, however, to take a two-point lead and force an Iowa State timeout with 3:09 to play. The teams again went back-and-forth as a Carleton layup cut it to a one-point game with 56 seconds left, but Texas Tech was able to hit its free throws down the stretch to pull away. 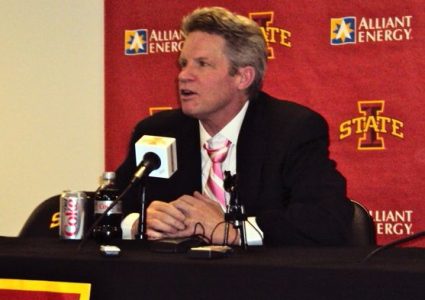