The fact that he spent a Big 12 season-high 24 minutes on the floor in Saturday’s 80-61 win over Kansas State — and produced 10 points, including two key 3-pointers — drew forth a sense of gratitude, not vindication.

Work’s paying off, he said, smiling. Simple as that. No more, no less.

“I didn’t come in today knowing I was going to play,” Cooke said with a laugh.

The redshirt sophomore transfer from Oregon State played mere seconds in two of the the previous three games. He’s been suspended one game for violating team rules — against Kansas State on the road. His double-digit scoring output Saturday took his points total in conference play to 24, but it’s significance for a possible March run transcends the numbers.

“Hallice was great,” said guard Matt Thomas, who sank five 3-pointers while leading the Cyclones with 20 points. “I would like to see the plus-minus because I know when he came in in the first half he was a huge spark off the bench for us and I think he can be that every night for us. I’m really happy for him.”

So was ISU coach Steve Prohm, who spoke pointedly about how happy he was for Cooke to perform like he did after the game.

“I thought today everybody played for each other,” he summarized. “Everybody shared the ball.”

Cooke’s been biding his time all season — perhaps his whole career. He came out of St. Anthony (N.J.) High School and shot 45.6 percent from 3-point range his freshman season at Oregon State. He didn’t like the culture in Corvallis, however, so found a new home with then-Cyclone coach Fred Hoiberg in Ames. Sitting out last season was hard. Undergoing double-hip surgery in the offseason was harder. More struggles ensued this season, but Cooke said he hasn’t wavered when it comes to time spent in the gym, both in practice and after hours.

Not that it’s really over. Minutes are a precious resource. Cooke simply showed what he’s capable of doing with more than a handful of them.

“I was emotional, too,” Cooke said. “I was on the bench a couple times and I had to wipe my eyes coming out of the timeout because I was reflecting back on what I’ve been though this year.”

Maybe Saturday was a breakthrough. Maybe it wasn’t. It still emerged as a feel-good story for un up-and-down ISU team in need of a few. 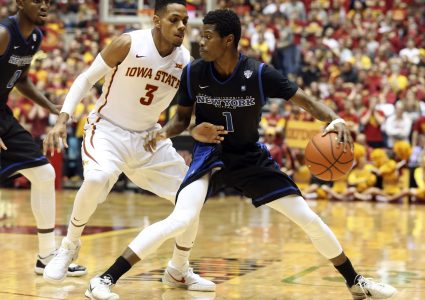