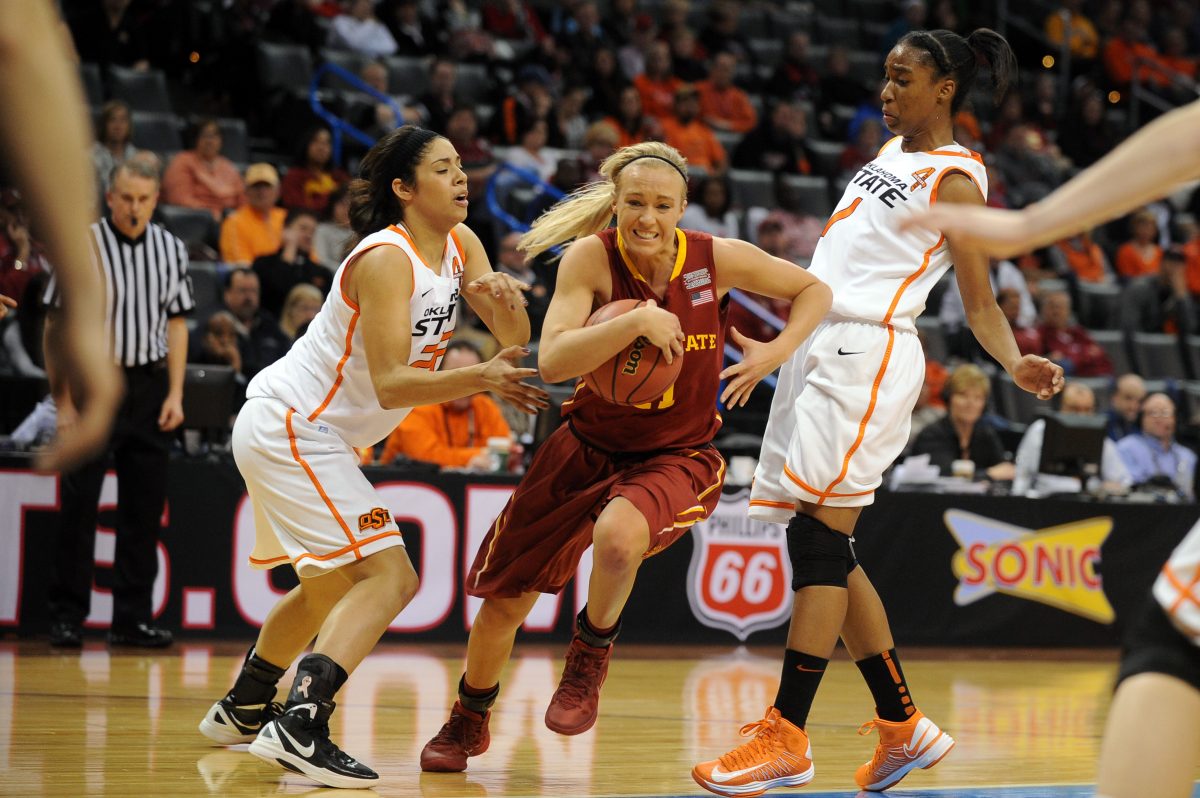 Cedar Falls, Ia. —Jadda Buckley caught the ball on the right wing and rose to up to shoot behind the 3-point line. She had struggled on the night having knocked down just one of her first eight shots. The Iowa State women’s basketball team had a 54-52 lead over Northern Iowa with 1:06 to play in the third quarter.

UNI had erased a 15-point first quarter deficit to pull the game even just moments before. The Cyclones needed a spark. Something to create a run.

The official blew his whistle. The shot fell through the net.

Basket good, plus a foul. Buckley made the free throw to complete the four-point play. It was part of a 9-0 run to close the third quarter for Iowa State that sparked them down the stretch to an 84-75 win Wednesday night at the McLeod Center.

“That’s a huge shot, four-point play at a big time,” said Iowa State head coach Bill Fennelly. “We’ve always been a team, like Seanna mentioned with all of our kids, just take good shots. Don’t shoot not to miss. Don’t be afraid to shoot it. For us to get 84 points, get four people in double-figures was huge against a team that we always have trouble scoring against. A really good offensive effort by our kids tonight.”

Junior forward Seanna Johnson led the way for the Cyclones’ four double-digit scorers by tying her career-high with 28 points. She also grabbed 10 rebounds to complete her fifth double-double of the season, and 18th of her career.

It was just another day at the office for Johnson as she continues her sparkling third season in Cardinal and Gold.

“Coach talked about don’t dribble in the lane. They were coming from all over and I had a couple turnovers off that,” Johnson said after the game. “I feel like without that my teammates found me the ball. (Fennelly) told me keep shooting. I missed the first couple 3s I took but he said, ‘Keep shooting if they’re going to guard you like that. Hit the three.’ Towards the end, I think, Jadda found me the ball, my teammates found me cutting. I just got easy baskets.”

It was only two weeks ago when Fennelly called out his posts in the loss to Drake, but Wednesday night they may have been the x-factor.

“Well we’ve challenged them every day,” Fennelly said. “Three of the last four games Bry has played really, really well. The way we need her to play. I thought Meredith was huge tonight off the bench. There’s a lot of great moments in this game, but I think for Mer to come off the bench and get 11 points in 14 minutes was really big.”

Buckley was the fourth Cyclone to finish in double-figures with 10 points, despite shooting just 2-of-10 from the field and 1-of-6 from behind the arc.

She also dished out eight assists. You don’t always have to shoot lights out to make a mark on a game.

“That was a great game. Great game. Both teams played really hard. Really proud of our team. We’ve been through a lot of stuff lately with some illness and injury,” Fennelly said. “After a great start and kind of a so, so middle, we really bowed up. Did some great, great things. We talked about December being the start of our season and it started in a great way. Couldn’t be more proud of the team tonight.”

Talk about a complete 180-degree flip from the last time I saw this team in person. The Cyclones’ front court was completely overmatched by Drake a little more than two weeks ago, and that couldn’t have been further from the case on Wednesday.

Bry Fernstrom was dominant in the lane and was capable of scoring every time she touched the ball. Meredith Burkhall showed an ability to mix it up down low unlike we’ve seen from her in the first five games of the year.

Iowa State isn’t even close to the same team when these girls are on.

One last thing, I tweeted this during the game and I’ll say it here: Fernstrom is going to be unstoppable when she is capable of consistently making moves with her right hand.

I would say balance was the story of the game for the Cyclones on Wednesday. We’d seen dominant performances from Johnson, Fernstrom and even freshman Bridget Carleton, but we hadn’t really seen them have big games on the same day.

They didn’t have Carleton in this game as she continues to bounce back from taking an elbow to the face during the trip to Mexico, but we saw what this team can do when more than one person is feeling it.

This team has a lot of weapons and I’m not sure all of them have revealed themselves yet, which brings me to my next point.

Am I the only one that sees a little freshman year Seanna Johnson in Starks? She rebounds, scores when she has to and plays solid, hard-nosed defense.

She probably isn’t going to put up 20 points or grab 15 rebounds, but she is going to make a positive contribution almost every night.

This girl could be in for a huge career.

*** Coach Fennelly wasn’t able to tell me much when I asked him about a timetable for Bridget Carleton’s return.

“I don’t know," Fennelly said. "I think it’s going to be awhile. She don’t look real good. We’re hoping, but it is what it is. You never want someone hurt and we tell our kids all the time, we’re not making excuses for her, but it’s hard. You want her back and TeeTee is playing on one leg and fought through it. Seanna and Jadda are looking at me like, ‘You going to take me out?’ And I’m looking over here going, ‘I didn’t see it.’ You’ve just got to find a way and we found a way tonight. We learned a lot about our team. It was a big night for us in more ways than winning just one game.”

It was big for Iowa State to be able to bounce back after their poor last two games in Mexico, plus the injury bug that left them with only eight players available on Wednesday. Now they have a few days to get healthier before Southern visits Hilton Coliseum on Sunday.

Fennelly said postgame that Thursday will be an off-day for the Cyclones.

I’d say they earned it.