CEDAR FALLS, Iowa – Hallie Christofferson scored 21 points and grabbed 10 rebounds as Iowa State (7-1 overall, 0-0 Big 12) kept Northern Iowa (4-6 overall, 0-0 MVC) at bay during the second half to post a 67-59 win Monday in the McLeod Center. The win was Iowa State’s 10th straight against Northern Iowa and the Cyclones’ fifth straight win over the Panthers in Cedar Falls.

Iowa State began the second half with a 33-20 lead and held a 48-35 advantage after a pair of Christofferson free throws with 9:29 to go. UNI methodically worked to close that gap, which was cut to five points when Panther Jen Keitel hit a three that made the Cyclone lead to 56-51 with 2:55 remaining. Northern Iowa would get no closer. A Christofferson bucket was followed by a full court pass from Nikki Moody to Anna Prins for a layup against a pressing Northern Iowa team. A Moody basket followed that gave the Cyclones a 62-51 advantage with 1:15 left in the game.

Chelsea Poppens had 14 points and 10 rebounds for the Cyclones, her 50th career game in double figures scoring. Anna Prins had 14 points for Iowa State as Moody finished with 11 points, seven assists, five rebounds and a steal with just two turnovers in 36 minutes of play.

Iowa State utilized a 22-5 run that started midway through the first half and led UNI 33-17 with 2:32 left before halftime.  Prins scored eight points during the Iowa State scoring rush. The Cyclones outscored the Panthers, 16-2 in the paint in the first half.

Jacqui Kalin led UNI with 19 points. Keitel had 10 points and 12 rebounds for the Panthers, who made 11 threes in the game.

The crowd of 3,190 included a sizable number of vocal Iowa State fans. The Cyclones play host to East Tennessee State Thursday at 7 p.m. in Hilton Coliseum. 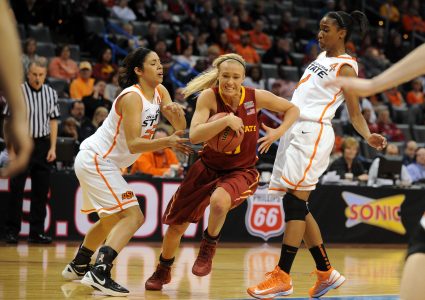