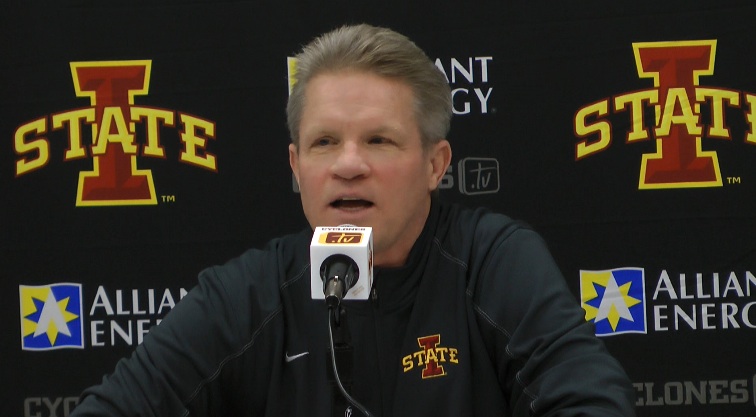 AMES — The Iowa State women’s basketball team (1-0) took a 22-21 lead over Hampton when freshman TeeTee Starks put in her first career basket with 7:45 left in the second quarter of the Cyclones’ season opener Friday night.

Just under a minute later, senior Kidd Blaskowsky knocked down a 3-pointer and sophomore Emily Durr did the same on the next ISU possession. Seconds later, sophomore Jadda Buckley came up with a steal and layup to cap a 10-0 Iowa State run.

“Lately, we’ve really struggled to shoot it,” Iowa State head coach Bill Fennelly said after the game. “We started slowly, but make five in a row and the game changes quickly. You go from 1, 2, 3, 4-point lead and all of a sudden bang, bang, bang and there’s separation.”

It wasn’t hard to pick out the best player on the floor throughout the game as Iowa State freshman Bridget Carleton led the way with 28 points, a record for a freshman making their ISU debut. She tacked on an additional 11 rebounds and four assists.

After Iowa State’s last exhibition game, a win over Concordia-St. Paul, Fennelly said Carleton could be better than she had been in the two exhibition contests.

Friday night, she was.

“The scouting report on her will be different and people are going to guard her different,” Fennelly said. “Early in the season, Hampton doesn’t know. They’re like, ‘Hey, she’s a freshman, whatever.’ All of a sudden, she goes crazy. Drake will know and it will be on the road. And the Big 12 will know, but I’m sure glad she’s here.”

Do-it-all junior Seanna Johnson joined Carleton in the double-double category adding 11 points and 10 rebounds of her own.

Buckley finished with 11 points and sophomore post Bryanna Fernstrom made her presence felt bringing 10 points off the bench. It was another balanced performance for an Iowa State team that suddenly looks to be chalk full of weapons.

“We have a lot of kids that can score,” Fennelly said. “I think in the middle two quarters we had 59 points, and I think, two turnovers. If we’re not turning the ball over, we’ve got kids that can make baskets.”

The Cyclones were stifling defensively holding the Pirates to just 37 percent shooting from the floor and 32 percent from behind the arc.

After that bucket by Starks midway through the second quarter, the Cyclones outscored Hampton 75-38.

It was the spark that started a run that hopefully will continue when Iowa State matches up with Drake on Sunday at the Knapp Center in Des Moines.

“The quick turnaround is hard,” Fennelly said. “When we do the schedule, we did this on purpose, we wanted a short turnaround to simulate what’s going to happen down the road. So it’s about Friday night at 10 o’clock until Sunday at two, you better be ready to go. One day, quick turnaround, get your scouting report, be mentally ready to go and when you go on the road, understand what you’re getting into.”

What wasn’t there to like about what Carleton did Friday night? She knocked down close to half her 3-point attempts and missed only one shot from inside the arc. She was hustling all over the floor after loose balls and rebounds.

She was simply the best player on the floor. Last season on opening night when Bryanna Fernstrom scored 25 to set the record for points in a freshman debut, it seemed like it would take a monster effort to surpass her.

It’s safe to say Friday was a monster effort by Carleton.

After shooting rather poorly for most of their two exhibition games and most of the first quarter on Friday, the Cyclones came alive during their 10-0 run in the second quarter. After starting 1-5 from three, the Cyclones closed by hitting 11 of their last 19.

Anytime you can shoot over 50 percent from the field and from behind the arc as well as score over 90 points, you know you’re doing something right.

Iowa State did a good job of keeping Hampton from getting comfortable most the night defensively and kept the Pirates from finding any kind of rhythm. Hampton took a lot of jumpshots and that played a role in them shooting just 37 percent from the floor.

The Cyclones just didn’t really allow them to get a ton of good, open looks. Most of the time, that’s going to win you games.

You don’t have to turn teams over a lot to be effective defensively and that’s the boat ISU is in right now.

Iowa State played a really good game Friday night, but like I wrote after both of their exhibitions, they need to find a way to get off to better starts.

You can’t expect teams in the Big 12 to shoot less than 40 percent from the field and it would be nice to see ISU come out right away and throw the first punch.

But once again, I’m nitpicking. The Cyclones won the game comfortably.