AMES — The Iowa State women’s basketball team did exactly what it had to Sunday afternoon in a 70-41 rout over Arkansas-Pine Bluff.

They hit shots, played solid defense, crashed the boards and maybe most importantly, played well enough to give themselves a chance to rest key players while getting minutes for some reserves that needed them.

It wasn’t always pretty but coming off an emotional victory on Friday night over Iowa, it was just what the doctor ordered.

“Not our best effort and probably to be expected after Friday,” Iowa State head coach Bill Fennelly said. “Won the game. Now it’s time for finals so time to move on.”

Coming off the thrilling win over in-state rival Iowa it was important for the Cyclones to get off to a quick start and they did just that Sunday afternoon. After trailing early in the first quarter, the Cyclones closed the period on a 10-2 run to lead 23-18.

It was during the second period that the Cyclones really took complete control and it was due in large part to freshman guard Bridget Carleton.

“Jadda (Buckley) kept looking at me and I kept saying, ‘Just throw the ball to Bridget,’” Fennelly said. “Sometimes you can overthink it. We ran very few plays. We just said get it, go with it. She got some good looks early but the problem is Bridget is 6-for-10 and the rest of our team is 1-for-17. We’ve got to figured that out.”

The third quarter was all about defense for the Cyclones as they held the Lady Lions to just six points while playing in a 2-3 zone for most of the quarter.

On the afternoon, Arkansas-Pine Bluff shot just 32.7 percent from the field and 18.8 percent from behind the arc. The Cyclones held them to just 33 percent shooting in the second half.

“We played a lot of zone today to work on it,” Fennelly said. “It worked out even better knowing Jadda couldn’t play much. We made a couple very simple adjustments on how we guarded and let them throw it to a certain spot then trap it. In the first half they kind of got us running around too much.”

Freshman center Meredith Burkhall scored in double-figures for the fourth straight game by putting in 11 points on 5-of-7 shooting and grabbing six rebounds in 21 minutes.

Junior Seanna Johnson was the third Cyclone to score in double-figures with 11 points while grabbing six rebounds of her own.

Sophomore guard Jadda Buckley played only 13 minutes due to illness, but dished out seven assists and went one-for-one from the floor.

The Cyclones now have seven days of rest and a few final tests before Alcorn State visits Hilton Coliseum next Sunday for a 2 p.m. tip.

“There’s very little time when you’re a basketball player where you don’t have to worry about school,” Fennelly said. “When finals are over and before second semester starts. So that’s a time where you can watch a little more video. Maybe get in the gym a little bit more and shoot on your own. Things that you have more time to do. So hopefully that will happen. Coaches will recruit, players will study and hopefully finish the semester well.” 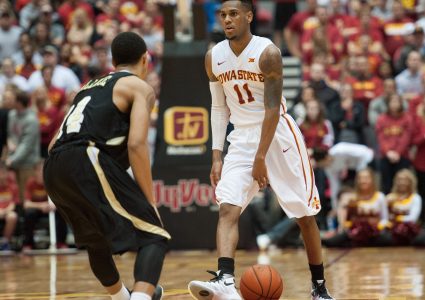