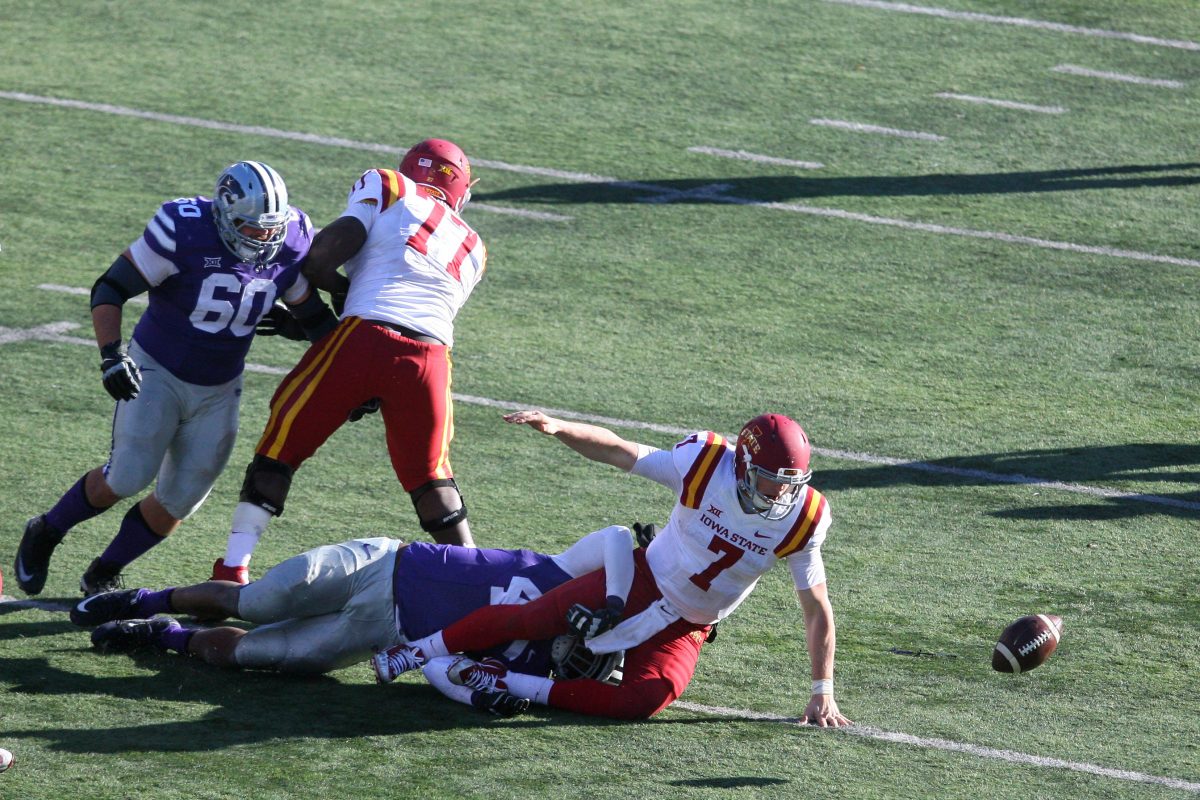 Three kneel downs and a punt.

That’s all Iowa State apparently needed to hold on and finally crush its Bill Snyder-based Kansas State curse. None of that happened, obviously. Shockingly, the Wildcats won, 38-35. And how it happened boggles the imagination almost as much as it sears the soul.

Blame fumbles. Or coaching decisions. Or simply a second half in which the Cyclones were outscored 24-0 — and 10-0 in the final minute. Maybe all of the above. Either way, it’s hard to imagine a more demoralizing loss, or giveaway, in recent memory.

“This hurts,” Campos summed up.

The pain’s only part of it. Reviewing the final two possessions of the game leads to questions as well as consternation.

The Cyclones led 35-28 and had just mounted a fourth down stop. One minute and 31 seconds remained. A celebration seemed inevitable — and then all hell broke loose.

ISU elected to hand off to tailback Mike Warren, who was stacked up at the line of scrimmage, stripped of the ball and also sustained an injury. K-State recovered, eventually scored a touchdown and overtime entered the realm of possibility.

But why didn’t the Cyclones simply kneel down three times and punt with a 10-15 seconds left (assuming the clock runs as usual)? Rhoads offered a lengthy rationale — before finally saying, "You’d like to have the decision back."

Rhoads: “There’s a chart that you operate off of that tells you every sequence, every possible sequence, three timeouts, two timeouts, one timeout and every single clock scenario for what those are. And we were not in a point to be bale to run it out. Well, obviously after the great stop and congratulating the defense on a great play, got on the headset and a decision had been made based on the chart, which is how you operate. With the position of where we were o the field and what they would have had to do even had we got to fourth down and got the punt off, you’d like to have the decision back. I’ll just be perfect candid and honest with you. You’d like to have the decision back, Now, at the same time, you run 60, 80, 90 plays a game and one of the key goals is not to fumble the football. And that’s not putting the blame on Mike. That’s just what you have to do as an offensive football team and we didn’t get that successfully completed.”

The Cyclones had one last possession in regulation and on 2nd and 6 at the ISU 29-yard line, quarterback Joel Lanning was sacked and fumbled at the 22.

Speechless? Breathless? Angry? ISU fans likely suffered under the weight of a mixture of all of these emotional states  — and probably more.

“We just kind of hurt ourselves in the second half offensively,” he said.

It all started so well, as it often does.

ISU shined brightly in the first half. Lanning threw for three touchdowns, with two going to Allen Lazard. Warren had 147 of his 195 yards rushing by the break, including a 76-yard scamper to the end zone. The defense allowed seven points (K-State scored its second touchdown on a kick return).

“We were just clicking as an offense and a defense,” offensive lineman Jake Campos said.

Rhoads hasn’t managed to beat the Wildcats in seven tries, but six of them have been decided by a touchdown or less. None were quite like this, though. A breakdown. A “stunner.” A chain of events that no one could script in their worst Snyder-fueled nightmares.

ISU clearly did not — and one last game at West Virginia remains in the 2015 season.

“I already told the guys it’s heartbreaking,” senior captain linebacker Levi Peters said. “We have too many seniors here that are going to play one last game in their lives. Some of them, they may play some more. You can turn your head and walk away or you nut up and be a good teammate and a good brother and you fight (with) everything you’ve got for this last game.”