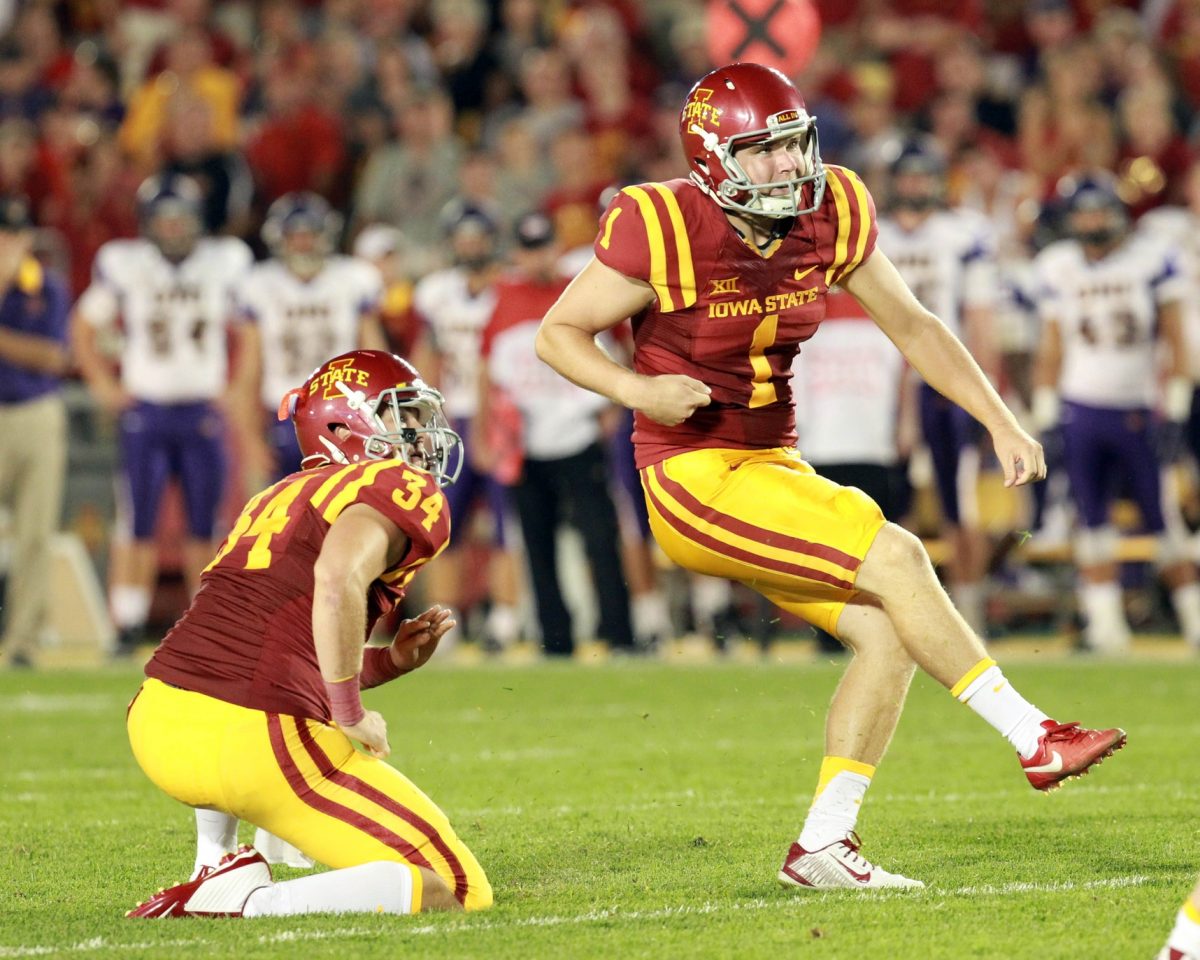 Yes, Iowa State’s generally ultra-accurate place kicker conceded, he would have ideally attempted a potential game-winning 32-yard field in Saturday’s 30-23 double-overtime loss at Toledo from the middle of the field, not the left hash mark.

But no, his lone miss in four attempts that night can’t be blamed on less-than-perfect placement.

Netten’s been on both sides of the manic kicking spectrum. Just last season, his clutch career-long 47-yard boot gave the Cyclones a 20-17 win at Iowa. Saturday, he missed one at a key time. Continually asking why is fruitless.

Learn and move on.

It ain’t easy being under a microscope, but it’s what Netten signed up for. Embracing the role of place kicker requires extreme courage. Cornerbacks may occasionally be on “islands,” but kickers, well, their make-believe places of residence range from Tahiti to Siberia.

So is backup. Rhoads implored his team not to point fingers after Saturday’s loss — and with at least 11 different players committing 14 penalties it’s unwise to designate one play (or player) as the cause for a second straight setback.

“He’s one guy of many that was on the playing field and as I told them in the locker room after, there’s not a guy on the team that doesn’t have a play that they’d like to take back from that game,” Rhoads said. “That’s what I told them to focus on.”

Netten said he’s put the kick behind him.

But how hard is it to truly move on; to bury the past, to escape from Siberia?

“That’s something that you’re not going to completely forget about for a while,” said Netten, who drilled the second longest field goal of his career, a 44-yarder, to give ISU a 23-20 lead in the first overtime. “But, yeah, essentially, because I knew that, you know, I mean, how much worse can it get? So might as well just go out there. You’ve just got to stay composed and relaxed and let just let your body do what it does.”

“I found out I would be starting the game on Friday, Friday night,” Warren said. “So it was kind of a surprise.”

The Cyclones gained 207 yards on the ground to Toledo’s 171 — which meant they’d outrushed an opponent for the first time in the last 15 games.

“I feel like the run element really made us diverse,” said Warren, who’d rushed nine times for 28 yards in the previous two games. It helped the passing game a lot. One thing we’ve been trying to do is run the ball.”

ISU’s intent on sustaining that necessary growth in the ground game. Roads said Warren returned to the practice field Tuesday and Wednesday with even more vigor than he’d shown in the lead-up to Toledo.

“I knew he was going to have a  good game and now he’s taken that and he’s practicing with a different step and his ability has ratcheted up to another level, which is extremely exciting,” Rhoads said.

Rhoads responded frankly when asked what it means to “learn how to win" — and if that’s necessary after suffering through back-to-back losing seasons.

Summary: Yes it is and it takes both mental and physical toughness to reverse that trend.

“In our (league), you’ve got a three-game non conference schedule is all you’ve got and you’re playing pretty dang good people every week when you come out,” Rhoads said. “So it’s hard to just come out and gain confidence through securing victories. You’ve got to go out there and work and ‘finding ways to win’ is actually a phrase that we’ve used this week in practice, because at times in our past, we’ve found ways to lose games and we’ve got to find ways to win. I’m a firm believer that’s in work and preparation and doing things right so many times that you can’t do them wrong.”