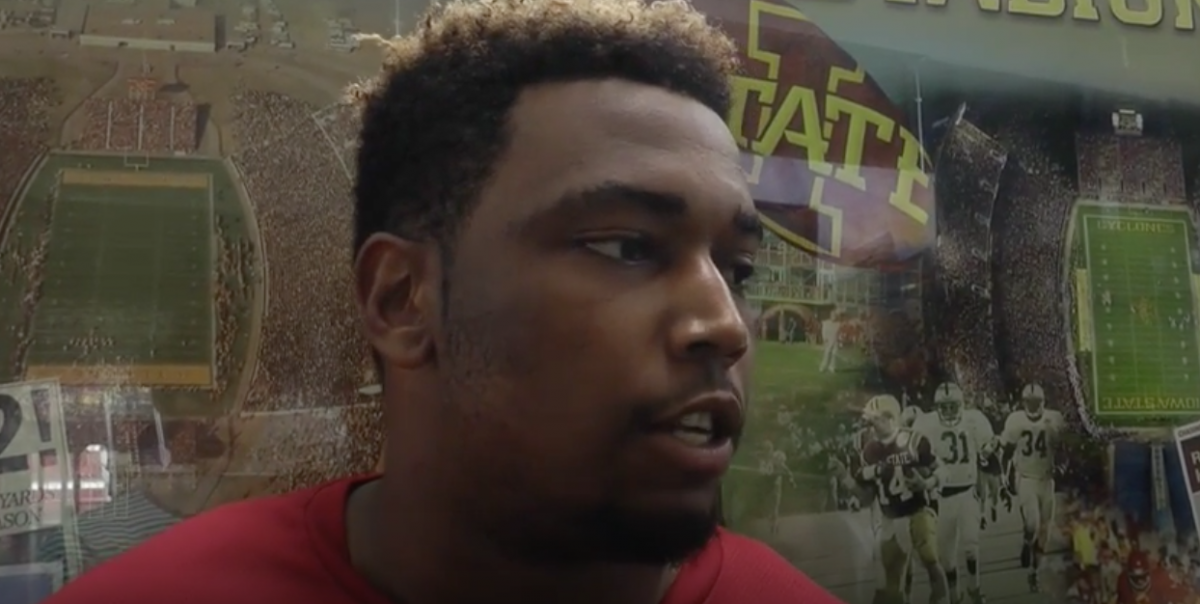 AMES — It didn’t take long for Jaypee Philbert to let his new position coach know his biggest goal as a left tackle at Iowa State. The JUCO transfer from Coffeyville Community College met with Brandon Blaney his second day on campus. It was in that meeting when Philbert set the bar for his career.

“I told him I wanted to be the best left tackle in the Big 12,” Philbert said after the Cyclones’ fourth practice of fall camp on Monday. “He said we’ll work together to meet that goal.”

The redshirt sophomore will have to beat out returners Brock Dagel and Jake Campos in order to take the first step towards reaching that goal, which would be earning a starting spot. Early on, that’s obviously a tall task for a guy who has never played a down of Big 12 football.

The veterans have a jump on Philbert when it comes to knowing the playbook, but he doesn’t seem too concerned.

“From day one I learned half the playbook through the summer and in fall camp I learned most of it now,” Philbert said. “I want to play. I want to play and I want to play now. I know if you don’t know your playbook, you won’t be out there.”

Philbert says it won’t be mental issues that keep him off the field, but he is still learning to keep up physically.

Blaney, who is entering his second year as ISU’s offensive line coach, echoed that sentiment.

Philbert isn’t going to back down from any test on his quest to be the best left tackle in the league. He is going to face competition like he has never seen before on the other side of the ball, including Baylor defensive end Shawn Oakman. The thought of facing some of the best the nation has to offer doesn’t scare Philbert one bit.

*** Iowa State’s returning offensive linemen combine to have started over 75 career games and Paul Rhoads says that makes this the most veteran group he has had at Iowa State.

“We knew that had the possibility of being a positive byproduct of last year when he lost so many guys. Experience is awfully important. Just knowing what it’s like in those trenches at the level that Big 12 football is often important. Now, you take those starts from a year ago and where that puts us from an experience standpoint and you’ve got to build skill level.”

*** Our Rob Gray wrote about the improving health of Brock Dagel in this piece, but Dagel expanded on how he is feeling after a few days of fall camp after practice today.

“I’m feeling good. Long past year of recovery to get to this point to be ready for fall camp. I’m feeling good. I’m a fifth year senior so I’m starting to feel a little bit older, getting sore just after a few practices. But you know, we have a great training staff and a great strength staff that keeps my body good.

*** Redshirt junior Daniel Burton is the most experienced returning offensive lineman for the Cyclones with 20 career starts. Rhoads has said in the past that he thinks Burton could be an all-conference player as an upperclassman, but Burton isn’t letting that get to his head.

“I go out and try my hardest everyday. If it happens it happens. Having great expectations that’s part of it. You want to push yourself to exceed those expectations the best you can do. I’d love to achieve that, but we’ll see.”

NOTEBOOK: No news is good news