In a word, that described Iowa State’s first practice of fall camp on Friday — and that’s a very, very good thing.

It set a somber tone for another season filled with more than the typical amount of injuries. But Friday?

“We did (come out healthy),” Coach Paul Rhoads said with a smile. “I was going to lead with that. Nothing coming off the practice field. Wally (Burnham) got bumped early, but finished the day.”

No news is obviously good news in that regard.

Here are some actual developments after day one (in no particular order):

1. Joel Lanning took some No. 2 reps at quarterback. What does that mean? Obviously, the coaches want to see more of the strong-armed sophomore — and Rhoads said Thursday he could be utilized as a runner and maybe even a pass catcher this season. Other than that, not much to see between the lines.

“I’d probably say Grant (Rohach) is two, just because of experience and starting time and so forth,” Rhoads said. “But we’re reppin’ all three of them and we’re reppin’ our three-deep all the way around as we start camp and quarterback’s certainly a part of that situation. Joel will take some reps with the twos, but Grant sits at No. 2.”

2. Touted new JUCO defensive end Jhaustin Thomas, as expected, casts an imposing shadow. The 6-6, 265-pounder excelled in one other area, too.

“He throws up well,” Rhoads said. “Good form. Good form — but, he jumped right back in and that’s a credit to him. And from snap to whistle he was playing fast and even after going through some fatigue and what he did, when it was time to play he was going fast, which was impressive for a new guy. He’s got great length. You see immediately why he was recruited by the people he was recruited by and now one day at a time getting him into football shape.”

3. The Cyclones showed a good deal of 3-4 looks on defense, which obviously can bolster pass coverage. Could that mean more 3-4 during the season? Burnham said it’s possible.

“More linebackers on the field,” Burnham said. “But you can’t rush three all day. So we’ll play our four-man front and three-man front.”

“You can drop eight, you can do some different kinds of blitzes and things like that that you can’t get out of the four-man front,” Burnham said. “At the same time, you can’t get the same pass rush.”

4. There were some dropped passes, but offensive coordinator Mark Mangino said a bit of rust is expected on the first day of fall camp.

“We dropped a couple,” he said. “But then we really made some nice catches in traffic, which you want to see. We want to see guys catch the ball whey they know they’re probably going to get whacked after they catch it and we had a bunch of those today. I didn’t like the ones that hit the ground. I’ll be honest with you, that never sits well with me. But I understand the first day, everybody’s excited and wants to do well. Now everybody got that first practice out of him, we’ll get more consistency.”

As for that wide receiver hype, Mangino echoed the head coach’s cautionary words from media day. He likes the group, but won’t anoint it as anything beyond that.

“I don’t like to get in to potential too much because potential means you haven’t done it,” Mangino said. “I think there’s hope there that this can be a really good group. I want to see them do it and then we’ll talk about how good they are then.”

“He was a little tired, was what he just gave me as I left the indoor,” Rhoads said. “Two weeks resting it, when he’s got a chance to rest, we rest him and he didn’t go home for two weeks and grind it out, so just a little physically tired, but the knee was good. And we rotated him in and out, too."

Dagel, when healthy, provides a sturdy bookend to Jake Campos at the tackle position.

Sprinkle in Philbert — who was part of that rotation Friday as the No. 2 left tackle — and there’s a mature and potentially highly-productive trio leading the way there.

“(Philbert’s) a guy with good size and movement,” Mangino said. “It was a difficult day for him just because it was his first day of practice at Division I, just like all of our junior college kids. And it seemed like the world was going about 1,000 miles an hour around them and they were trying to catch up. But he’s talented. He’ll settle down, get used to the work ethic and what’s expected at this level and he’ll contribute, he’ll play.”

*** Speaking of linebacker, the WILL spot will likely come down to Levi Peters or Luke Knott, Burnham said. Obviously, that all depends on how Knott’s hip holds up. Also, both could see the field at times when the 3-4’s being used.

“Works out pretty good that way,” Burnham said. “It gives us depth.”

*** Reggan Northrup continues to impress at times at nickel, but so does JUCO transfer Jay Jones. “(Jones) is a long athletic kid,” Burnham said. “He makes plays. We can use him in some pass rush stuff and he can take on an offensive tackle and leverage him. We haven’t had that in that position since I’ve been here.”

Burnham’s take on Northrup’s Friday: “Reggan is a wild March hare right now,” he said. “And we’ve got to calm him down. That’s good —I’d rather have it that way than the other way. But he’s very athletic and he’s going to help our team because he can run and he’s a physical player. He’s just got to slow down and learn and not be so hyper-active all the time.” 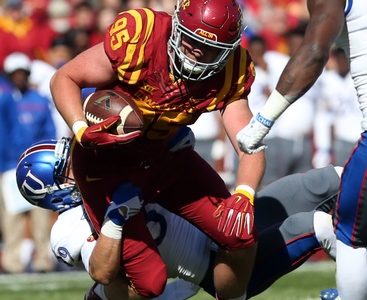 Players on Mangino news: “Surprising,” but they’ll move on