AMES — Last Spring, Paul Rhoads called Pierre Aka into his office and told the soon to be junior that the Iowa State coaching staff was considering moving him to the offensive line.

Aka wasn’t pleased. He saw this potential move as a demotion.

“I think that was kind of a wake up call,” Aka said after Tuesday’s practice. “That was his way to telling me, ‘Hey, you know, get your stuff right. If you don’t then we’ll figure out a way to use you.’ I think his message was more you have the talent to be a football player but maybe we need to put you somewhere else.”

Aka says he didn’t say much after that. He knew it was time for him to change the way he approached football.

“It was time to fish or cut bait for Pierre at defensive line,” said Iowa State defensive tackles coach Shane Burnham with a chuckle. “Either go or go somewhere else, meaning the offensive line, and he responded.”

Aka now sits atop the depth chart at defensive tackle as fall camp rolls on. He has the potential to be a key piece of a defensive line that could be much improved compared to 2014.

He recorded just six tackles in seven games last season, but Aka could be primed for a break out season. Burnham pointed to several players that struggled in their first few years on campus and then figured it out during their junior seasons, including current NFL players Jeremiah George and Deon Broomfield.

“It’s a man’s game out there and sometimes, whether it’s a mental maturation or it’s physical, the light doesn’t go on,” Burnham said. “I think guys just come along differently and that’s where he’s at.”

Burnham says he can trust Aka to be out on the field now, which he couldn’t in past seasons. He called Aka a guy that lucked into some plays despite making mistakes.

Aka thinks those issues have been remedied.

“I kind of approached it like it was my senior year, last chance to do something right being under the microscope,” Aka said. “Whether it was in the weight room or the film room I just took an extra step doing everything.”

Burnham and Aka aren’t the only ones to notice the change. The other guys alongside him can tell the difference as well.

“He’s a lot more physical,” said junior defensive tackle Devlyn Cousin. “He’s been playing with a chip on his shoulder and like he has something to prove because people didn’t think he was nothing. Now he’s really stepping up to the plate and he’s going to bring that force to the end position this year.”

*** The defensive line is expected to have more depth than they have had in recent years under Paul Rhoads and Devlyn Cousin says that is becoming clear in fall camp.

*** Cousin also said that some scheme changes could lead to some more aggression from the ISU defensive line.

“We were shooting gaps and playing off of peoples edges. This year we’re running straight through people. So it’s going to be man to man. The most physical, that’s who wins.”

When asked if he liked the change he had a simple answer.

*** Shane Burnham weighed in on the kick and punt returner battles after practice on Tuesday. He mentioned Jomal Wiltz and Allen Lazard as possible kick returners. He also threw Wiltz and Lazard into the mix for punts, as well as Trever Ryen and De’Monte Ruth.

“Right now we’ve got a bunch of guys trying out for it. Number one on punt returns we’re looking for a guy that can possess the football and catch it and a guy we can trust. From there if we can find a guy that can make places, we’ve been pretty good, we’ve had some luck on that return team. Looking for a guy since Jarvis is gone it’s wide open so we’ll see.” 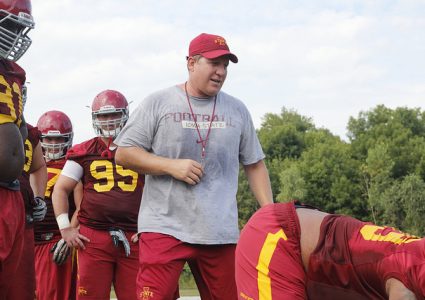 Camp Insider: Sifting through the situation at defensive tackle