A week ago when we talked about how quickly things can change, it was centered around the perception of Iowa State’s ability as a road team and the sudden window for opportunity to take the Big 12 crown after Kansas lost at Kansas State.

Two straight gut punch losses have put the Cyclone’s title hopes on the back burner and pulled the frustrations to the forefront. Against Baylor, it was a barrage of long balls from Baylor that swung the tide while the Cyclones limped down the stretch on offense. Against Kansas State, it was the miscues throughout that kept the Wildcats in the game but turnovers late sealed ISU’s fate when it appeared a win was there for the taking. Kansas City. Avoiding that even with two more wins comes down to Iowa State needing Texas to beat Baylor in Austin and/or Kansas beating Oklahoma in Norman.

The first meeting between these two teams was interesting to say the least. The first half was made 3-pointer after made 3-pointer for each team and the Cyclones built a lead as large as ten points. But the Sooners made a run and pulled away in the second half. Iowa State continued to hit from the outside but they couldn’t keep pace with Oklahoma’s scoring inside and outside.

With guys like TaShawn Thomas and Ryan Spangler, defensive rebounding against the Sooners is a big deal but Iowa State did okay in that regard by grabbing 63 percent of available defensive rebounds. Oklahoma barely outpaced that, but the big deal was the turnover battle where the Cyclones uncharacteristically turned it over on nearly 19 percent of possessions while Oklahoma was half that.

Oklahoma is a tough guard. Guys on the outside can penetrate and hit shots while they have two athletic big guys that can put the ball on the floor, hit the offensive glass, and finish around the rim. The Sooners have the fourth best scoring rate in league play at 1.06 points per possession. Oklahoma’s best attributes are their third best shooting rate in the league with an effective field goal percentage at 50 percent and the fourth best turnover rate at just 18 percent.

While Spangler and Thomas can demoralize teams on the offensive glass they really don’t do a lot of damage as a team with just the eighth best offensive rebounding percentage in the Big 12 of 31.8 percent. The one surprise to me is they have the lowest assist rate in the league at just 51 percent of made shots being assisted.

The Cyclone scoring defense comes in at ninth in the league though the gap from 9th (1.04 ppp) to 5th is just 0.0244 ppp (or 0.0386 ppp to third place). That climb to fifth place for the Cyclone defense when factoring their tempo basically amounts to two more points per game given up. Teams have tended to shoot the ball well against Iowa State, especially from the perimeter and in Big 12 games, the ISU defense has given up the eighth most shot attempts from beyond the 3-point line.

The Cyclones have done well keeping teams off of the free throw line and the offensive glass. The Sooners are making 73 percent of their free throws and can do plenty of damage from the stripe, though they tend to not get there too often.

The Iowa State offense is still as potent as they come. They’re leading the league by scoring 1.10 ppp and they have the lowest turnover rate paired with the highest effective field goal percentage in the league. The Cyclones have the third best 3-point percentage and the best shooting accuracy inside the arc.

The Sooners defense may be one of the biggest surprises in the Big 12 and they’re allowing just 0.96 ppp and teams are really struggling to make shots against them. Their defense is allowing just 45 percent in effective field goal percentage and they are forcing the third most turnovers in the league at nearly 21 percent.

Those forced turnovers and their shooting defense inside the arc have really keyed their success. Taking care of the ball and converting in the paint will be paramount for the Cyclones to win this game.

The Oklahoma Sooners aren’t a team loaded with depth but their top four guys may be as good as anyone in the league or country.

It all starts with Buddy Hield, who is capable of scoring in every way possible and when he gets it rolling he really gets it rolling. About once per game he’ll string together a wave of buckets that gets the Sooner offense pouring in the points. His numbers actually look pretty similar to Bryce Dejean-Jones, but he logs 82 percent of minutes instead of 58 percent while having a much higher usage rate.

Isaiah Cousins and Jordan Woodard are the other two members of the back court and they are both capable scorers, especially from 3-point land. Frank Booker is the capable backup that comes in off the bench and can hit some shots as well.

Then you have Spangler and Thomas to deal with in the middle. In the last meeting ISU avoided doubling the post to not leave open shooters from the outside. That plan ultimately backfired because Thomas torched the Cyclones in the middle for 22 points on 11-for-17 shooting inside the arc. And after all of that, the Sooners still hit shots from the outside.

Since that game, Iowa State still hasn’t really been doubling but they’ve been emphasizing denial to the post ups that has really limited opponent touches on the block. Jameel McKay will likely get the matchup with Thomas and look to keep the ball out of his hands on the block. At the same time he’ll have to be very smart with the shots he chooses to challenge with how that can leave openings for offensive rebounds.

One of the toughest aspects of the Cyclones guarding the Sooners is finding someone for Georges Niang to guard. Spangler is really the only option but his motor and quickness around the paint are tough to match. The best case scenario is getting him in foul trouble to get him off the court, but his foul rate isn’t too bad and you don’t want to have to bank on a strategy like that.

Monte Morris should spend most of his time on Woodard while Dustin Hogue and Naz Long will probably take turns with Cousins and Hield.

One of the interesting parts of the last matchup was how much Oklahoma used Hield to guard Niang. Iowa State tried to get isolations for Niang but often times he was off the block and on the first dribble they were sending an extra defender. That was key to forcing Niang into four turnovers. He’s had moments where he’s been turnover prone this year when the offense is being run through him, keeping it simple and finding him on the block against mismatches within the flow of the offense are key to exploiting the matchup.

Below is a chart of all of Iowa State’s conference games. The blue line and the axis on the left is ISU’s team points per possession scored in each game and the red line is Georges Niang’s invidual turnover rate in each game and the axis on the right. There isn’t a consistent line for Niang’s turnovers that follows Iowa State’s scoring rate but, the overall trendline of Niang’s turnovers appears to be very key to the Cyclone’s scoring. As he turns it over more the scoring for Iowa State falls off.

Aside from Niang, Hogue has had his own recent struggles with turning the ball over. He has 26 turnovers in his 16 Big 12 games this year and eight of them have come in the last two outings. He averaged 1.3 turnovers per game through the first 14 games and four turnovers per game in the two games last week. Hopefully, the weight of senior night doesn’t put him in the mode of trying to do too much as it sometimes can.

But in the end, Iowa State’s offense isn’t a huge concern for me so long as they are hitting shots at an average rate and taking care of the basketball.

Defensively Niang will have to have a big game, even if it just amounts to keeping Spangler off of the offensive glass and containing him in the paint. Neither Spangler or Thomas are going to shoot many 3-pointers or beat you by hitting from outside. So sag back and give them that shot instead of getting beat off of the dribble.

Buddy Hield will likely get his, but avoiding an avalanche of points from him is crucial to keeping the Sooner offense at bay. That, and avoiding the secondary guys rising up to really hurt you with their scoring. In that regard, Cousins is probably the biggest concern there as a guard they can cause problems for your defense.

The Cyclones have reeled back after two tough losses and don’t have much time to re-group and find a couple of wins before heading to Kansas City with the best seed possible. At this point, they just need some good vibes and to remember that they are still a really good basketball team. Long stretches of the last two losses had the Cyclones outplaying their opponents but lulls have given the opposition small cracks in the window to exploit and they did on both occasions.

Iowa State hasn’t lost consecutive home games since February of 2011 and I don’t think that will be snapped now, but it definitely won’t come easily. 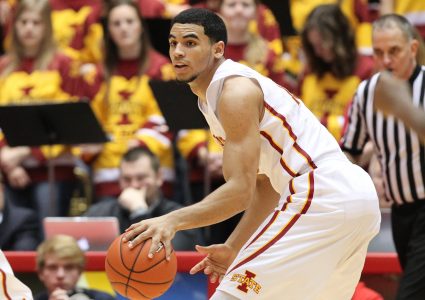