If you’re wondering if Iowa State’s latest football commitment plays with an edge, he’s got an answer. Two, actually.

But Coleman, who chose ISU over Fresno State and Idaho, wasn’t finished.

Coleman, who acknowledged he’d recently drawn heavy interest from schools such as Missouri, said one of his attributes is a quick, explosive initial surge at the point of attack. He added he plans to work on using his hands more adroitly at the next level and would be fine with a shift to defensive end if the coaches call for it.

“I’ve waited for this opportunity for four years, all of high school,” said Coleman, who began modeling himself after Suh in the last year or two. “Since I found out what D-I was, I’ve wanted to go D-I. And being able to go to the Big 12 is a great experience, because some friends I grew up with, they always said I’d go big, but I didn’t think I could go this big.”

His goals are similarly large. Job No. 1: pack on 35 pounds of good weight.

“I’m humble and I just want to be great now,” Coleman said.

Plenty of work lies ahead. There’s a reason Coleman’s offer sheet wasn’t voluminous, though he became a rising star on the recruiting trail as the countdown to next Wednesday’s signing day dwindled. He’s a work in progress and eager to grind at the Bergstrom Football Complex.

“I’ve never seen a weight room so high-tech in my life,” he said. “Everything has something electronic tied to it. It was a good look.”

So was the campus and the fan base, which Coleman marveled at while viewing highlights.

“The passion, everything,” he said. “It was like an electric vibe. I see the videos of these guys and the band — the fans going crazy. Just a very good experience.” 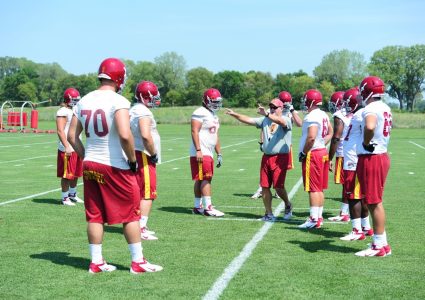 Rhoads’ recruiting game plan is paying off up front