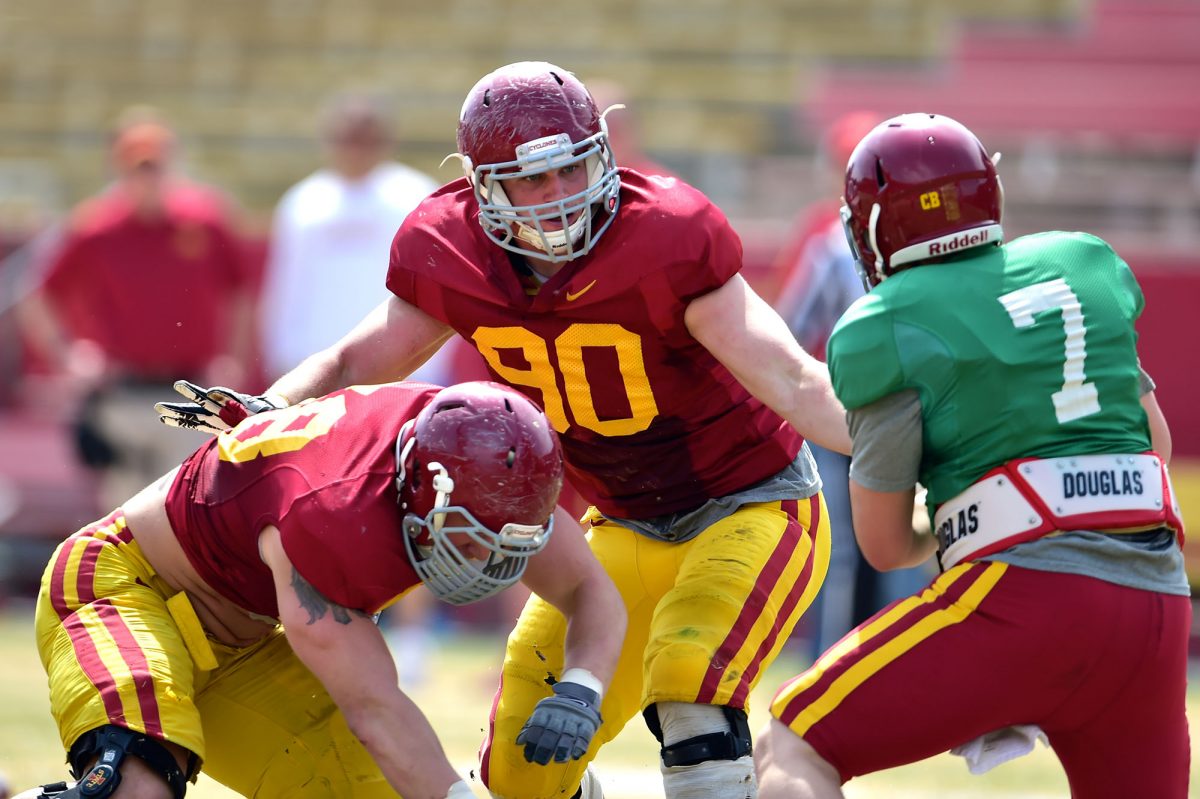 AMES — At first, nothing seemed out of the ordinary.

Meyers had done that before, in games and in practice, as part of the speed/pass rush package.

Meyers swiftly complied, but he didn’t know the change signaled his time as a defensive end had, well, come to an end for the foreseeable future.

“Kind of caught me off guard,” said Meyers, who will make his second start at tackle in Saturday’s 7:20 p.m. clash with AP No. 7/USA Today coaches’ poll No. 6 Baylor at Jack Trice Stadium. “I was like, ‘All right, we’ll see how this goes.’ But I don’t know. Still getting the hang of it, so it’s a work in progress.”

Early returns show the switch to be a smart one.

He notched a quarterback hurry in his third straight game, tripling the total he produced all of last season.

So Meyers has embraced the role of “inside man” without a hint of reluctance.

“He took one for the team,” said defensive coordinator Wally Burnham, who, because of Meyers’ willingness to change, was able to start talented JUCO transfer Trent Taylor opposite mainstay Cory Morrissey on the edge against the Hawkeyes. “He’d rather be a defensive end, because it’s thick in there where he is now. And he’s a little undersized, but he’s accepted the challenge. He’s willing to play for the team and he was impressive the last time we played a game. Made some plays and made some other people make some plays because of things he did taking care of his gap or rushing the passer, or whatever it is. So he’s done a good job for us.”

He’s not done yet.

Throughout spring and fall camp, Meyers developed confidence in his speed along the edge.

The same metamorphosis is taking place in the more confined interior — albeit at a necessarily quickened pace.

“It’s definitely a different mentality,” Meyers said. “Got to get off the ball every time. Get off, because you know as soon as the ball is snapped you’re in someone’s face, so like I said, there’s not as much space.”

Just enough to carve out a niche.

And the addition of Meyers’ quickness alongside veteran nose guard Brandon Jensen helps Morrissey make deeper and more frequent forays into the backfield, too.

“It’s great for our defense with his speed and his athleticism,” said Morrissey, who struck for two of the Cyclones’ four sacks against the Hawks. “He’s just a good player. It’s going to add a lot to our defense and once he matures more and figures that out, gains some weight, he’s going to be a great player.”

Meyers once considered himself quite the basketball player, too.

He tore his ACL going up for a layup as a high school freshman, so eventually shunned roundball and focused on football.

“It was just a hobby for me,” Meyers said of his hoops experiences.

Still, the cross-training kept him fit and augmented his explosiveness.

“Playing basketball really helped me with my footwork and it definitely got me in shape,” Meyers said. “I could tell going from basketball to football I’d be in a lot better shape than I would be otherwise. And it’s good to play a different sport in the offseason, kind of get your mind off things.”

Change, even by moving over just one spot in the trenches, clears the mind in much the same way, while opening up opportunities for others.