It’s been an ongoing issue — and so chronic and debilitating that his coach, Paul Rhoads, said this spring he might never play football again.

A major decision loomed, one backlit by heartfelt meetings with family and sobering consultations with doctors. Knott — a junior who has endured complications from two hip previous surgeries — began to fully open his eyes.  After all, there’s football and there’s life. Sometimes they merge and both become brilliantly illuminated.

Knott glanced at his roommate, Mitchell Meyers, the Cyclones defensive lineman who was undergoing chemotherapy after being diagnosed with Hodgkin’s lymphoma.

Suddenly his troubles seemed grain of sand-sized as he watched his friend tackle treatments and train with the team in between.

“You start to feel sorry for yourself about a hip,” said Knott, who played through the pain last season and finished third on the team in tackles with 74. “You look over at your roommate who’s going through a chemo session and it kind of puts life in perspective.”

Knott and backup quarterback Grant Rohach share a house with Meyers, who has been back home in Houston undergoing radiation treatment.

They spent a lot of time together as Meyers began his arduous march back to full health. In hospitals. Living rooms. Weight training facilities.

Knott and fellow WILL linebacker Levi Peters both said Wednesday that Rhoads told the team after practice that Meyers will be with the team for the 7 p.m. season opener against Northern Iowa.

And if you could have seen the smile that stretched across both of their faces as they revealed the news, you’d understand immediately what Meyers’s presence means to all of them.

“Every day Mitchell’s an inspiration not only to me, but to our whole team,” said Knott, who will play as much as his body will allow this season, but is listed as the backup to Peters. “I’m ecstatic to see him. He’s definitely going to bring some life to the house for me and Grant, that’s for sure. As much as I love Grant, having that third roommate’s great.”

Meyers said this spring he plans to play football again. Check that: He said he will play again.

Watching Saturday’s game is another step in that process. Sharing the moment with teammates and roommates will make the final destination feel that much closer.

“I’m excited,” said Peters, a former walk-on who joined quarterback Sam Richardson as one of ISU’s 2015 captains. “I think I stood up and started squealing a little bit, but all the guys, too, they started clapping and hollering. Mitchell means so much to this team and if he was healthy and he was here right now he’d be making a huge impact. So we know how hard it is for him and he’s got our backs still. He’s in Texas, but he’s a Cyclone and he’s our brother.”

He’s a roommate, too. One who not only brings perspective, but serves as an example for how to handle adversity with grace, grit and a naturally confident grin.

“It’s nice having a guy to look up to,” Knott said.

“They’ve done work on that hip, they have,” Knott said. “I’d be lying to you guys if I said, ‘Oh, yeah, it’s perfectly fine.’ So when that happens, you have to find every edge that you possibly can, whether it’s finding a little bit more hint on what the opposing offense is doing, just so you can make that read a little bit quicker.”

Rhoads has seen Knott compensating and applauds the development. He said Knott — a two-time Academic all-Big 12 first teamer — is even smarter than he was before. He has to be. He’ll take the field Saturday night with his eyes wide open and an inspirational teammate and roommate near his side.

“He hasn’t missed a practice,” Rhoads said of Knott. “Hasn’t missed anything in camp. I don’t think every day’s been smooth and easy for him. I would probably tell you he’s in some kind of pain, or stiffness or soreness or tightness every day. You wouldn’t know that from Luke. Luke would never tell you that. Luke would never tell the medical people that. He’d take care of his body and do what he’s supposed to, but he’s not what he was before. But when that happened to him, I think he’s become a smarter player. I think Luke tried to rely on instincts and ability before. In the process of this happening — which smart players will really do, wise players will really do — is he’s got himself where he’s supposed to be sooner instead of relying on his speed to get him at that point later. And because of that, I think he’s a better player right now than he was a year ago.” 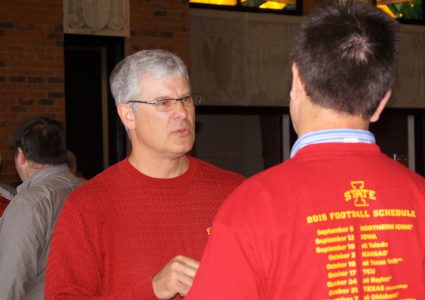