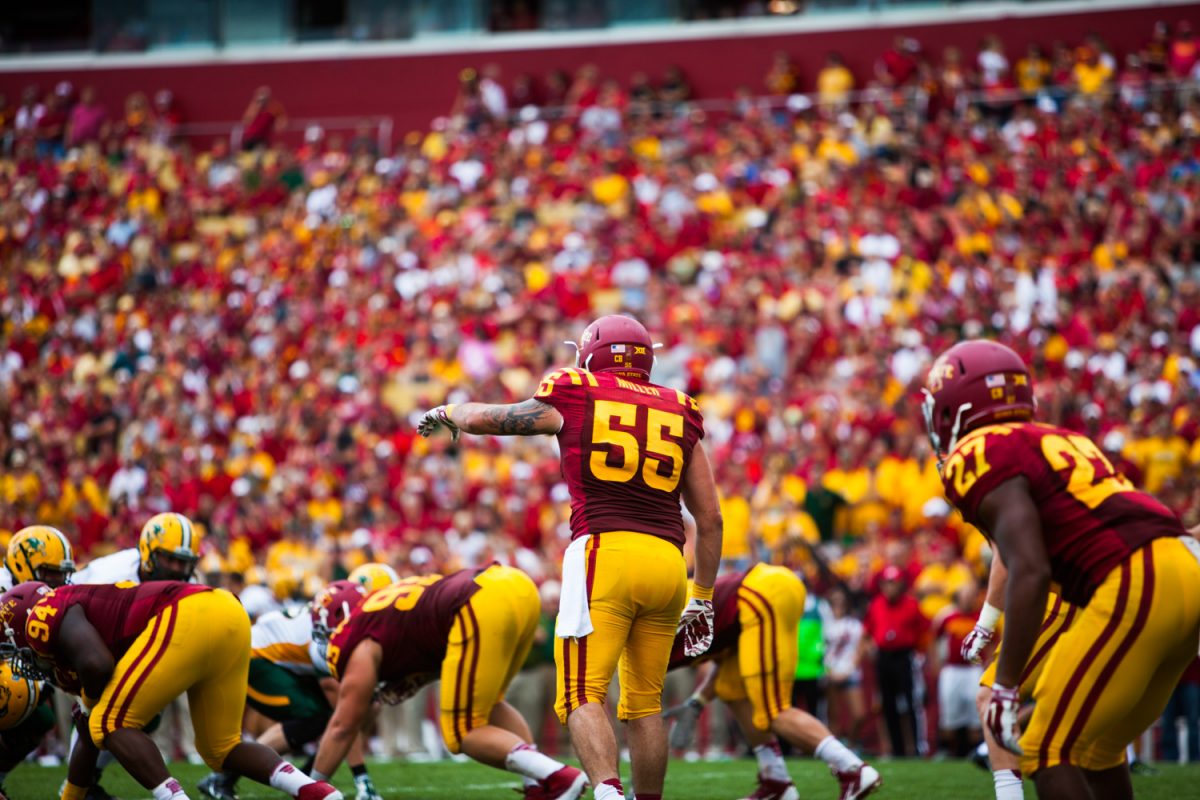 AMES — It’s April of 2011. The air is crisp; the tulips in full bloom as then-true freshman Iowa State linebacker Jevohn Miller’s padding up for his first spring game.

Miller, now a senior for the Cyclones, had arrived on the ISU campus early after finishing up work at BGM High School in his hometown of Brooklyn, Iowa well in advance of most of his friends and classmates.

Soon-to-be Cyclone star Jake Knott was banged up, so Miller would be the spring game’s starter at WILL linebacker — hours before he cleaned up for one last high school rite of passage: his senior prom.

“I remember I was really nervous because I had just got here,” said Miller, who leads ISU (0-2) in tackles with 20 entering Saturday’s 2:30 p.m. ESPN-televised Cy-Hawk Series rivalry game at Iowa (2-0). “Just started learning the defense. Actually, I didn’t even learn the defense. I didn’t know. I was just trying to make plays at that point.”

“He is still wet behind the ears and is as green as the corn in the Iowa fields when it comes to learning the college game of football,” Cyclone coach Paul Rhoads said at the time.

The learning curve seemed to span the horizon and stay there.

Miller remained a backup most of his first three seasons in cardinal and gold, working toward that “light goes on” eureka moment, which seems to be in full effect early in his senior season.

“That happens at different times for everybody.” said Knott, an NFL free agent who earlier molded himself into an all-Big 12 player. “It’s definitely starting to happen for him a lot more.”

Miller used to struggle translating his knowledge of the defense to real-time action on the field.

He said after last year’s season-opening loss to Northern Iowa he took a long, hard look at himself.

He examined his approach the the game and found it wanting.

“I knew I needed to be a better football player so I kept working on it week-to-week,” said Miller, who shifted to MIKE linebacker last week and will stay there. “At some point you’ve just got to stand up and say, ‘You know what? I’m a man. I’m going to do this. I love playing this game and nothing’s going to stop me from doing that.’”

The week after the UNI loss, Knott’s younger brother, Luke, supplanted Miller at the WILL spot — and Knott would hold onto the position until a hip injury requiring surgery forced him to the sideline.

Now both Miller and Knott are starters, with former MIKE starter (and redshirt freshman) Alton Meeks set to be the No. 1 guy at SAM linebacker when the Cyclones are in their base defense.

"Being in the film room defintiely helped him a lot," Luke Knott said. "That’s another thing about the communication: when we’re both out there, if you know kind of what the WILL’s doing, you kind of have an idea about what you’re supposed to do, so that definitely probably helped him as well.”

It’s a so far, "so good" scenario — with a big challenge on tap Saturday in Iowa City.

“Jevohn Miller made us a better football team moving from WILL to MIKE linebacker,” Rhoads said this week. “As we spoke after week one, there’s things you don’t really know about your football team until you start playing other people. We felt the need to move Jevohn to MIKE linebacker after that first game. Being the first time out there playing (MIKE) in a game situation he made a few mistakes, but overall he played very well and certainly was productive.”

And no longer remotely green.

Miller’s become a leader — a role he felt he needed to assume after the season-opening loss to North Dakota State.

The first practice after that loss was “great,” he said, but he and other senior leaders such as defensive end Cory Morrissey and defensive tackle Brandon Jensen agreed that needed to be reinforced.

So that players’ only meeting was held. Miller spoke. So did Morrissey and Jensen — and anyone else willing to open up in an effort to rise up as a group.

“I can’t just lead by example anymore because guys are looking up to me for maybe advice, or leadership on the field,” Miller said. “You have to step out of your comfort zone a little bit to be a be a leader.”

By most accounts, Miller’s leaped out of that limiting space.

“No,” Burnham said with a few trademark chuckles. “This is the first time. First time he’s ever taken it upon himself to try to lead. We’re so young. I think he’s the older guy out there and everybody says, ‘OK, maybe he knows what he’s talking about. Let’s do what he says.’ But he responded real well and the kids responded to him. He’s just got to keep improving and doing those kind of things.”

That development circles back to past setbacks — and even that beginning, when shoulder pads and corsages would collide.

Miller was requested for interviews after the 2011 spring game, but he couldn’t make it.

He was dashing back home to change into a tuxedo, pick up his date, and enjoy one last high school memory — but not before roommates Steele Jantz and Sam Tautolo wanted a picture snapped.

“It was kind of surreal,” Miller recalled.

Miller’s been riding the edge of the path toward daylight that emerged from that day ever since.

And finally, he seems poised to open the throttle and zoom straight ahead.

“As much as (current New York Jet) Jeremiah George improved as a player from his sophomore year to his junior year and from his junior year to his senior year, Jevohn’s done that in his leadership capabilities,” Rhoads said. “Right now, without question, he and Cory Morrissey are the leaders of our defense. Proud of him for stepping up and getting up and laying out some things necessary for us to be successful.”