Jevohn Miller will have a leg up on every other high school player in Iowa State’s 2011 football recruiting class. Due to the fact that he has enough credits to graduate from Brooklyn (Iowa) BGM a semester early, Miller plans on attending Iowa State when second semester courses begin in January. That also means that he will be eligible to participate in spring football practices with the rest of the Cyclone football team this April.

“I realized that I had enough credits to graduate so then it became a real option for me,” Miller said. “My thought process was that I will get to be up there with all of the guys for an extra three months compared to everybody else. Ultimately, that will make me a better football player.”

Miller committed to Iowa State in June. During his senior season at BGM, he led his team in tackles with 121 in 11 games. Miller took his official visit to Iowa State this past weekend where he learned more about his future as a Cyclone, where he’s projected to play WILL linebacker at the next level.

Second-team All-Big 12 linebacker selection Jake Knott was Miller’s host over the weekend. Miller is excited to be able to learn from the likes of Knott and A.J. Klein in the very near future.

“They are both really good guys,” Miller said. “They’re obviously outstanding football players. I really have something to look forward to with them and will hopefully be playing with them soon. Being able to be exposed to that kind of talent will help me. We have a young defense that will hopefully keep on building so we can win a Big 12 championship.”

Miller attended every Iowa State home football game this past season. While watching, Iowa State’s defensive production under coordinator Wally Burnham really inspired him.  In fact, Burnham’s coaching has already rubbed off on Miller in memorable session at an Iowa State camp this past summer.

“I had a chance to have him coach me at the padded camp and I probably learned more in that 45 minutes than I did all summer,” Miller said. “He was working on my hips and he was very supportive when I was doing drills that I didn’t really know how to do. He just told me to do it to the best of my ability.”

Miller said that he weighed in at 223 pounds on his visit this weekend. Tight ends coach Courtney Messingham is credited as Miller’s primary recruiter. 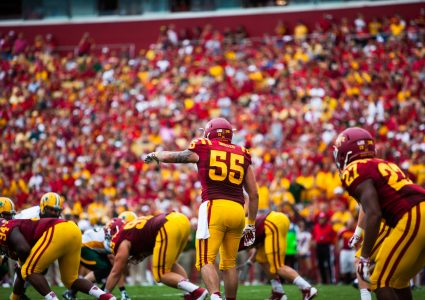