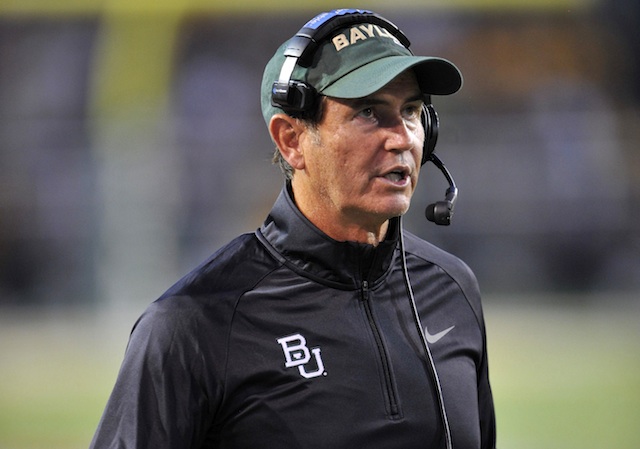 If Bill Snyder is a wizard, I don’t want to know what Art Briles is because he must be something in order to be the orchestrator of one of the most terrifying offenses in college football this year and recent memory. And he’s done it all at Baylor.

Of course when we talk Baylor, and more specifically, Baylor and Iowa State, we can’t help but shriek from what happened in Waco in 2013. It was a devastating night for the Cyclone football program. In the middle of a difficult season, with our coach that has brought us so much hope, we were all humbled and humiliated by a program that was once the dirty concrete under the doormat…not just the doormat. It was the biggest defeat by scoring margin in the history of Iowa State football and suddenly everything was in question.

Immediately following that debacle nobody wanted to analyze the mess that we had all just seen, however much of it you were able to watch. So let’s take a look at it now because I think there is a lot we can learn from the 2013 matchup that can shape how we look at this game this Saturday.

First off, when you give up 71 points and only score seven (in the last minute of the game no less), everything went wrong. Everything. Every. Thing.

However, in the three phases of the game the defense wasn’t the biggest contributor to that implosion. Sounds like crazy talk, but it isn’t.

In summary, nine of the 15 offensive possessions were three and outs or worse (turnovers instead of punts) and four more possessions were six plays or less and gained an average of 11 yards per drive (with a maximum of 18 yards).

The offensive struggles from 2013 are well documented and a secret to no one, yet this game stands out as bottom of the barrel. Below is how the numbers compared from the other 11 Iowa State games for how well ISU moved the ball on each drive. ("2 & TO – a turnover on the first or second play of the drive.)

Last season, the Cyclones effectively and nearly literally gave the ball right back to Baylor almost as quickly as possible. And this was a Bears team that by year’s end averaged losing the time of possession battle by nearly six minutes per game. Give a devastating offense that many opportunities and you will be, well, devastated.

The other thing this paltry offense did to Iowa State was destroy any hope for their defense with the awful field position they were constantly backed into. Four of Baylor’s 14 drives started at their 45 yard line or better and two of those started inside the Cyclone 30 yard line. Somehow (read: Kirby Van Der Kamp), all told for the game the Bears average field position was starting at their 32 yard line. Thanks to being pinned inside the 10 yard line twice and the 20 yard line three more times (though Baylor still scored three touchdowns and kicked one field goal on those five possessions).

That is a lot of pressure on a defense that already isn’t that great and the entire game is an example of an overmatched team losing in every phase of the game and how things can quickly spiral out of control.

What does it mean for this year?

Well, the season is still very early but there has already been improvement for the offense moving the ball over last season and more importantly within this season. Similar to the table above with success moving the ball, below is how the Cyclones have evolved from last year and improved this year:

One point that I think does need to be made is that the goal should not be a “ball control” offense for Iowa State. They aren’t good enough at this point to adapt their game to help the defense. The offense has to do whatever it can to score and not just worry about keeping the Baylor offense off the field. But it is obvious that an offense that scores more is having more success and keeping the ball longer than they did in 2013 in Waco.

Will a more successful offensive performance lead the Cyclones to an upset victory? Maybe not, but it is one necessary component to blazing that trail. Special teams will have to be perfect and the defense will have to find a way to get stops, get lucky, and find a few turnovers. And, with a seven o’clock nationally televised game the fans need to get weird.

A great ISU performance would leave the Waco terrors in the dust but they could be completely erased with another stunning win in the Paul Rhoads era.