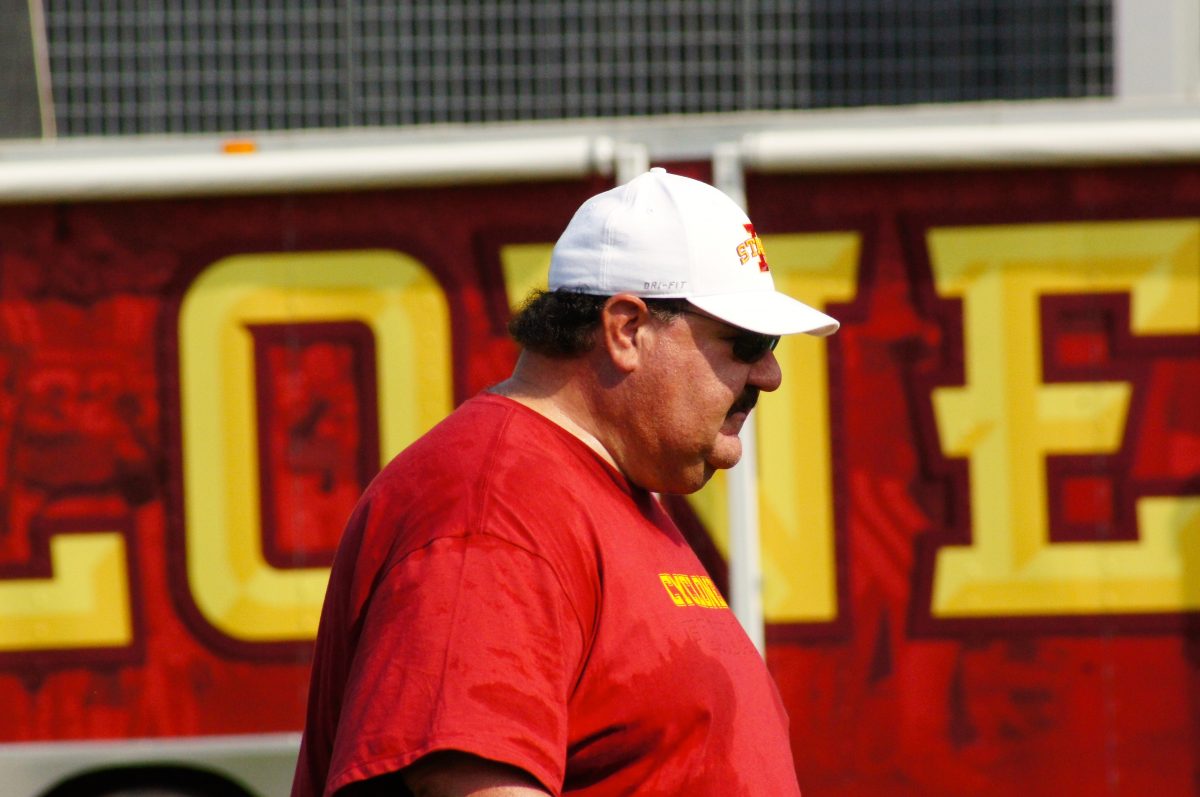 AMES — Reluctant to hit, or be hit?

Satisfied with a big catch here and there, while lackadaisically blocking downfield?

The Cyclones’ celebrated first-year leader of the offense emerged from the last true scrimmage of the fall pointedly talking toughness.

He’s seen some, but not enough — especially from the receivers.

“There were some really nice catches made,” Mangino said. “I don’t think we were as consistent today as we should be catching the football. I’d like to see our receivers — some of the guys are physical players. We need all of the group to be a physical group because they’ve got to block. They’ve got to understand that safeties and corners are going to reroute you and you’ve got to be tough with low pads, and physical.”

Seems a no-brainer — and it has been, Mangino said, for preseason first team all-Big 12 tight end E.J. Bibbs, as well as top tailbacks Aaron Wimberly and DeVondrick Nealy.

“Those guys are tough, hard-nosed kids,” Mangino said. “DeVondrick Nealy, he’s like a machine. For as light as Aaron Wimberly is, he plays hard all the time; he puts his pads down. Bibbs gives you everything he’s got every play. He’s physical. He’s talented. He can change direction. He’ll go make a play. And we have a couple of receivers that are showing that — a few of them are showing that ability, but we still need some work.”

Rhoads reiterated that he won’t publicly name a No. 1 quarterback until Monday.

For a couple more days, anyway.

“Saw positives out of both of them,” Rhoads said. “I do not believe either one has thrown an interception in two scrimmages. They’re taking care of the ball well. They’re playing with great command in the pocket. They’re delivering a more accurate ball than they’ve delivered since they arrived her on campus. Our strength program has paid off with arm velocity and I think their handle on what we’re doing and what Mark wants them to do and what coach (Todd) Sturdy wants them to do is apparent on a daily basis.”

Richardson’s made the most strides, Rhoads said, because he “had further to go” after starting both spring and fall camps as No. 2 on the depth chart.

Mangino said Richardson’s confidence has grown significantly as his understanding of the system — and his place in it — has deepened.

“Sam is a guy that I think learned some valuable lessons in the spring,” Mangino said. “It took him awhile to understand the culture of our offense and the way we do business. Sam has shown a much greater sense of urgency about his play. When we first got here, in his drops he took his time and wanted to read things. And took his time throwing the ball. Now he gets in his drop, he gets the read and he gets rid of the ball. That is really a big, big leap for Sam. Sam’s a talented guy. I just told Sam, ‘It’s OK to be laid back when you’re in your dorm room or on campus or hanging out with your buddies. But when we get on the practice field, the game field, you’ve got to play like your hair’s on fire.’ He’s starting to understand that concept really well now and I’m really pleased with what he’s doing.”

Mangino also was pleased (but not thrilled) with the way his offensive line performed in the scrimmage.

The line mixed in plenty of pass protection work, too — particularly when it comes to diagnosing and thwarting blitz packages.

“So today was kind of a pressure day on the O-line,” Mangino said. “How they responded? Like I said, just looking at it from the box and having to prepare to call plays, I’d say it was OK. There’s a lot of work to do, but I think they responded pretty well. I’m really pleased with the way they did some things.”

He’s also not even slightly down on what could be ISU’s most potent and deep receiving corps in the Rhoads era — despite the need for more comprehensive and engrained toughness.

“I like the group as a whole,” Mangino said. “I think they’re one of the most improved groups that we have. I think the receivers group’s got to be a tougher group when it comes to doing all those other things besides catching a football. And I don’t think we were great at catching ball today. There were some great plays by the defense, but we’ve got to go up and get some of those balls and be strong-handed. But overall, that group, compared to the first day of spring — it was kind of like a wild group. Now they’re more disciplined. They understand the offense more. They understand the expectations are very high and I think most of those kids are working hard to reach those expectations.”

TRUE 3-DEEP AT TE?:  E.J. Bibbs is a clear No. 1 and Ben Boesen‘s shown himself a capable No. 2. But what about third-string redshirt freshman Alex Leslie? "(He’s) one of our most improved players coming from the spring," Mangino said. "When I first got here he was a guy that kind of, he played real narrow. He didn’t play with a good base. He’s gotten a lot stronger. He’s probably 14-15 pounds heavier than he was in the spring. He’s got good hands. He’s a very smart guy. I’m very pleased with his progress and he’s working hard to get some time on the playing field and that’s going to happen.” 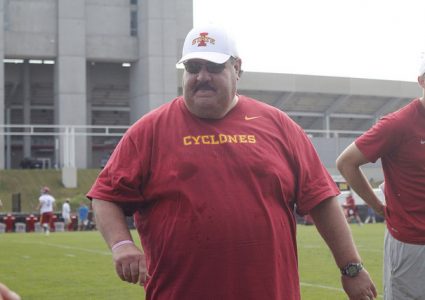 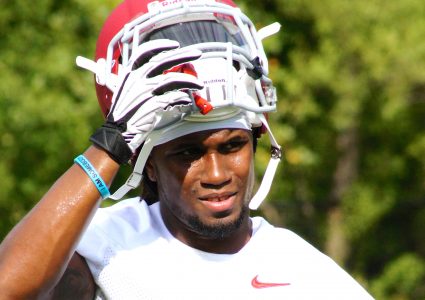