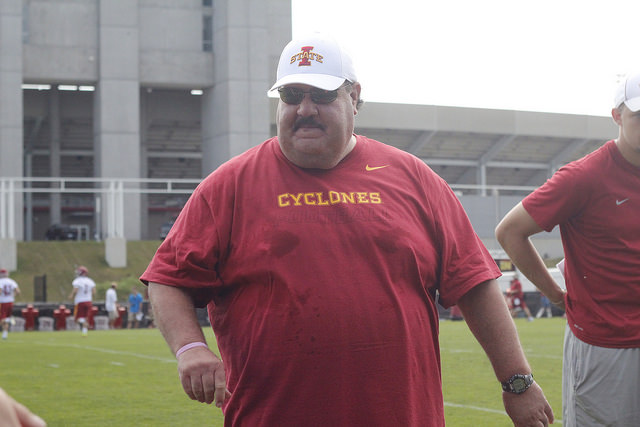 AMES — After Thursday’s practice, Iowa State head coach Paul Rhoads was visibly refreshed when talking about his team’s situation at quarterback. It is clear that Rhoads believes Iowa State has two quality options at the most important position on the field – although clearly, junior Sam Richardson appears to have an edge on sophomore Grant Rohach (more on this in a moment) at this point in time.

Rhoads’ message was that not only is the pair’s knowledge of new coordinator Mark Mangino’s offense much better than it was in the spring, but the duo is physically better across the board.

Both players having a year to grow (mentally and physically) helps.

But having a coach whose single role is overseeing the quarterbacks could be reason too. At the beginning of the Rhoads era, Tom Herman was the offensive coordinator/quarterbacks coach. Courtney Messingham had the same role the past two years. In 2014, Mangino will coach the tight ends while veteran Todd Sturdy is in charge of only the quarterbacks.

“I think it works to our advantage right now, not that it was wrong in the past but it works to our advantage right now that we have a quarterback coach,” Rhoads said. “That is his sole responsibility. Mark is able to worry about five units and his tight ends and not over-worry about the quarterbacks. I think it is a very healthy situation. I think their play from spring until now has improved because they have a better understanding of what we are doing and their skills have adjusted and changed under Todd’s leadership. That’s a double positive.”

So why all of the sudden is the local media on the Sam Richardson bandwagon? There are a few reasons, but quotes like these from Iowa State’s head coach don’t hurt.

“Through six seasons of three coordinators and two different offenses prior to that, you can just see a guy that has a better command of what it is that is being asked of him and going out and executing that,” Rhoads said. “I have always said that Sam is the best runner of the group.”

Rhoads has been complimentary of Rohach too. On Thursday, Rhoads noted that Rohach’s running ability is much better this August due to the weight he added in the offseason.

Rhoads said that he plans to name his starter on Monday as he wants to review tape from Saturday’s scrimmage before doing so. But unless something unforeseen happens, it looks like Richardson will be the guy to lead Iowa State’s offense in the season opener on Aug. 30 vs. North Dakota State.

Camp opened with a three-man competition to become Iowa State’s starting quarterback. Now, that number is down to two. But it wasn’t Joel Lanning’s skillset that got him eliminated from the race.

“Joel is a strong kid,” quarterbacks coach Todd Sturdy said. “He is really developing in the strength and conditioning program. He has a lively arm. I think he is very, very talented. His skillset as a quarterback is really good and I’ve been really impressed so far. He is a young player, learning every day and growing but I am really pleased and excited with his skillset.”

And here is something that you won’t read on any mainstream news outlet’s website. For you diehard Fanatics, I asked Sturdy to give me his first impression of true freshman Darius Lee-Campbell.

“He came out of a spread system so it is day one stuff with him,” Sturdy said. “We’re checking his grip. Checking how he throws the ball. I usually just kind of let it ride for a while so I can get a feel for his style and get a feel for how his ball comes out of his hand, just different things like that. We are experiencing with some things now and this is the time to do that with a young player.”

Iowa State’s Saturday scrimmage is scheduled to go down in the morning. Check out CycloneFanatic.com in the afternoon for complete coverage. 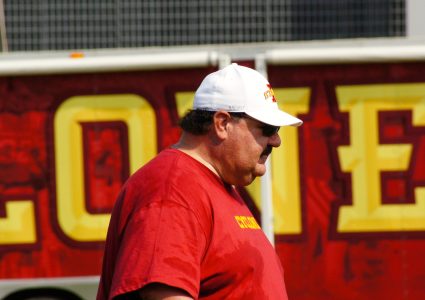