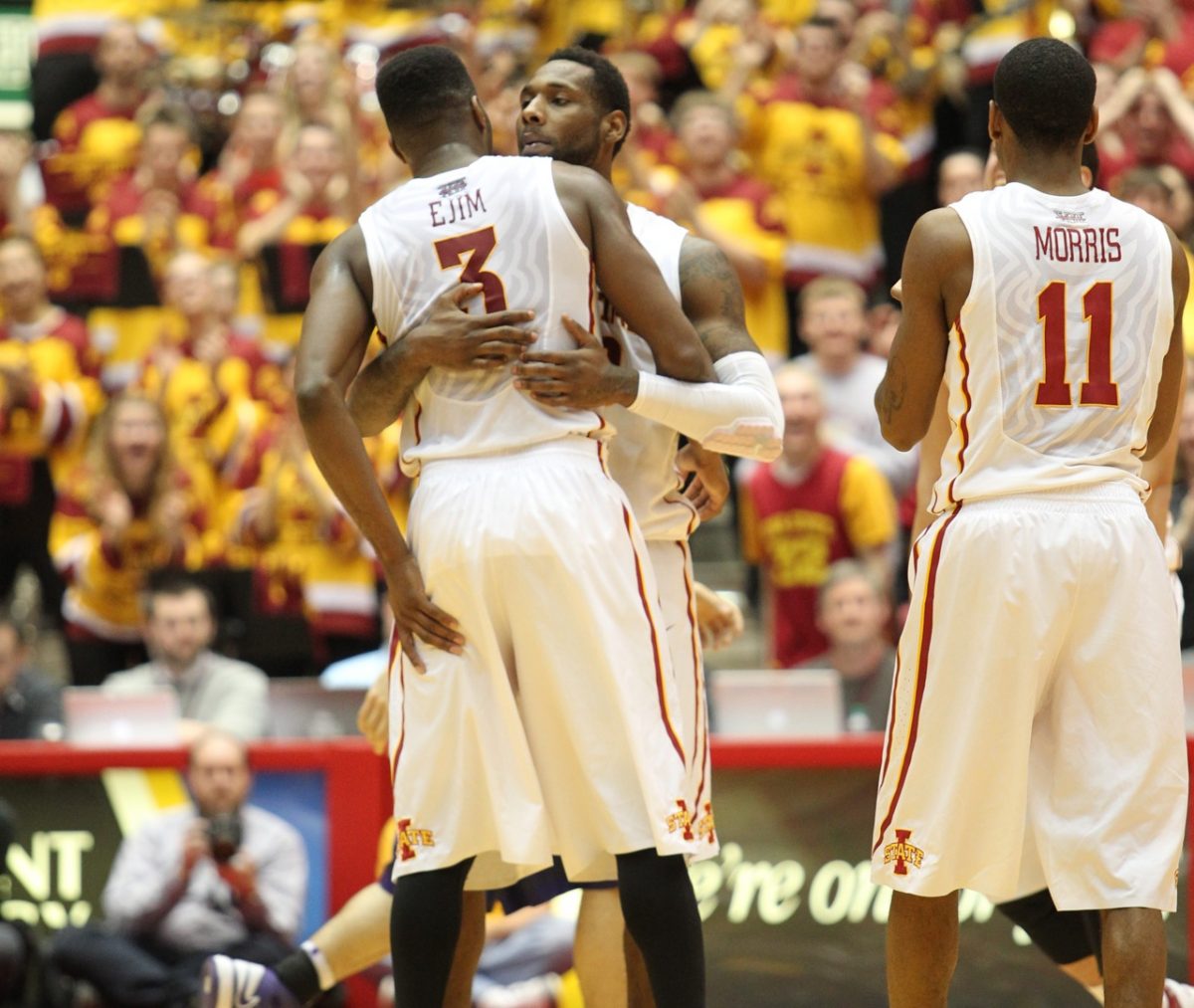 I want to give my radio partner Brent Blum credit for a theory that I heard him first discuss last week as we were recording the Mr. B Clothing Podcast. Blum pointed out how this Iowa State basketball team generally plays its best ball when the lights are the brightest. I couldn’t agree more and would like to add the aspect of motivation into the conversation.

Last week’s games proved to be perfect examples of this. A nationally ranked Texas team came to Hilton Coliseum on Tuesday and with revenge on the mind, the Cyclones turned out one of their most vigorous performances of the season. A sleepy road trip to TCU (then 0-13, TCU) on Saturday in front of a modest crowd produced an uninterested group of Cyclones and nerve-racking win.

If the premise of our conversation was accurate (and I believe that it is), expect an incredibly spirited performance by Fred Hoiberg’s Cyclones this evening when West Virginia comes to town for a 7 p.m. tip on your local Big 12 Network affiliate.

As you all very aware, Iowa State lost to the Mountaineers 102-77 in Morgantown back on Feb. 10. If they admit it or not, retribution is on the mind of the Cyclones today. If it isn’t, it should be.

“They handed it to us,” Fred Hoiberg said. “It was a bad performance by our team. They had a lot to do with it. They came out with a much greater sense of urgency than we did in that game and they obviously with the end result, they took it to us. I know our guys will be ready for it.”

The silver lining to that game is that ever since, Iowa State has gone on a three-game winning streak and Hoiberg has seen an increased level of defensive intensity from his group. The numbers back it too, specifically when it comes to 3-point defense. West Virginia went on a scorching 13-for-22 tear from 3-point range in that contest. Iowa State’s three opponents since that night have combined to shoot 26 percent from long range.

“We’ve been much better on that end of the floor since that game and we can still get better,” Hoiberg said.

Not only did Iowa State play its worst 40 minutes of the season a few weeks ago in Morgantown, the game ended with controversy, which should add to the intensity within tonight’s contest. Late in that game, Iowa State forward Dustin Hogue was given a flagrant 1 for kicking a West Virginia player (Kevin Noreen) while snagging a rebound. (It is notable that Hogue said that he did not do this on purpose a few days later). On the same play, West Virginia’s Eron Harris was handed a flagrant 2 and was ejected for a hard foul he delivered to Monte Morris.

To put it bluntly, West Virginia kicked Iowa State’s butt in round one. On top of that, the game got hairy in the closing minutes. Oh, and West Virginia’s crowd relentlessly taunted Pittsburgh native and Cyclone point guard DeAndre Kane all evening long.

Add it all up and yeah; expect the Cyclones to be fired up for this one.

What’s the difference? After Iowa State narrowly defeated West Virginia at home last season, Bob Huggins went on what was close to being what I’d refer to as a rant afterwards about how his program wasn’t prepared to play in the Big 12 Conference. Heading into tonight, the Mountaineers are 7-7 in league play and an NCAA Tournament bubble team.

What’s the difference between that team and this team? I asked Fred Hoiberg this on Monday.

“It’s a very difficult team to defend because of they way that they spread the floor,” Hoiberg said. “I don’t know if it is just style of play from moving from the Big East to the Big 12 or if it is just based on the personnel that he has. They are playing a lot faster than they did a year ago and they are really spreading the floor out. They are running a lot of spread pick and roll with shooters at every position when you have to suck in and help off of a great point guard.”

Grit: West Virginia might not play like a classic Bob Huggins team, but Hoiberg said that the Mountaineers absolutely maintain that vintage Huggins toughness.

“There’s no doubt about it,” Hoiberg said. “Every team that Bob Huggins coaches is going to have that toughness whether they are the No. 1 team in the nation or whether they struggle. You know that it is always going to be a battle because of the toughness that he instills in his players.”

Starts with Staten: West Virginia has two of the Big 12’s three leading scorers in Eron Harris (18.1) and Juwan Staten (18.0). Staten and Harris had 19 and 16 against the Cyclones earlier this month but it was the 3-point shot that killed Iowa State.

“It all starts with Staten,” Hoiberg said. “He is so good at getting the ball into the paint. What we did in that first game, we didn’t do a good job of staying in front of him with the initial defender but then he would split our second defender. Then, you are helping from the corner and that’s where they got a lot of those shots.”

Staten currently leads the Big 12 in assists per game this season at 6.04 per game. He is a long shot to win Big 12 Player of the Year but a very real contender to be on the league’s first-team.

Niang: What’s the difference between Georges Niang as a freshman compared to the sophomore that is averaging 16.5 and 4.3 now?

“There’s no way he could have played 39 minutes in a game last year like he did at TCU,” Hoiberg said.

Niang is in much better cardiovascular shape than he was a year ago.

Extras: Iowa State has opened as a 10-point favorite in this game. The Cyclones lead the all-time series against West Virginia 2-1. Mountaineer head coach Bob Huggins is 5-3 all-time vs. Iowa State.