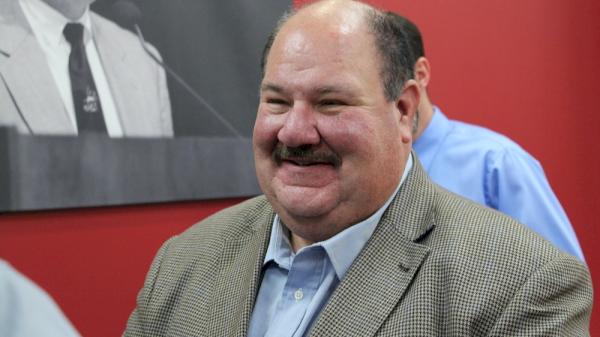 Allen Lazard had a special visitor at his basketball game last Saturday night in Marshalltown. While Urbandale handed the Bobcats a 65-59 loss on the hardwood (Lazard led the way with 19 points), Iowa State’s new offensive coordinator, Mark Mangino, sat in the stands waiting to shake his new wide receiver’s hand.

After the game marked the first time that Lazard, who Rivals.com has tabbed as the 47th ranked prospect and seventh best wide receiver in its final rankings before National Signing Day, would have a conversation with the man who will head up Iowa State’s offense in 2014.

“I can see why Coach Rhoads hired him,” Lazard said. “He is just like every other coach on that staff right now. He fits in perfectly. He is just a nice and genuine guy. We talked a lot about getting to know each other and stuff and he told me a lot about his history.”

Mangino gave Lazard a brief rundown of his offensive philosophy and a peek into what the Cyclones will be doing on that side of the football next season. The two will sit down and have a more in-depth conversation this weekend when Lazard takes his official visit to Iowa State.

“He likes to have three or four receivers on the field,” Lazard said. “That’s more chances for me to get on the field right there. He can put me out wide and give me the ability to go make plays.”

Lazard committed to Iowa State back on Dec. 3, 2012. The top-ranked prospect in the state has stayed solid with Iowa State since that day.

Lazard caught 49 passes for 1,065 yards and 16 touchdowns during his senior season.