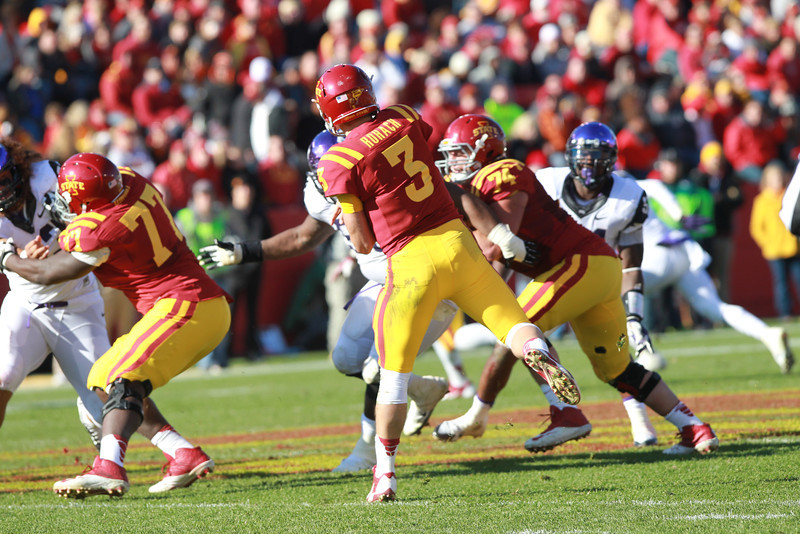 The truth is that with basketball’s showdown against No. 7 Michigan on the horizon, football’s road trip to No. 22 Oklahoma is getting little to no buzz at all as the weekend approaches.

This isn’t only in central Iowa either.

If you scour any decent Oklahoma site across the web, you will find plenty of football talk – but none of it revolves around the Sooners’ next opponent, Iowa State. There’s no “these guys worry me because…” chatter at all. Nothing. Nada. Zip.

I don’t blame them. After last week’s gut-wrenching 21-17 Homecoming loss to TCU, the 1-8 Cyclones are nowhere to be found on the upcoming college football weekend’s radar.

Honestly, an Iowa State win in Norman would be flabbergasting. Yet, they indeed do play the games for a reason. Upsets do happen. Is one possible this Saturday morning?

The Sooners will win if…

That is because over the last month, Paul Rhoads’ program has shown us absolutely nothing to make anyone think an Iowa State victory here is possible. In addition to how 2013 has gone, Iowa State is 3-36-1 all-time in Norman. History isn’t exactly on Iowa State’s side here.

The Cyclones enter Saturday’s match-up ranked 100th nationally in scoring offense and 115th in scoring defense. Those numbers illustrate exactly how you become a 1-8 team.

But even though the Sooners are 7-2, Bob Stoops’ program isn’t exactly the juggernaut that it has been in the past (in my humble opinion). Like the Cyclones, Oklahoma has quarterback issues of its own. Blake Bell has proven this season what many thought heading into 2013 – he isn’t exactly Sam Bradford. Bell, a junior, went 15-for-30 with a touchdown and two interceptions in last week’s 41-12 loss at Baylor. Since Big 12 play began, Bell’s touchdown to interception ratio is even at 5-to-5.

Match-ups aside, the single most important question heading into this game is this: Which Oklahoma team will show up?

If it is a team that is defeated after a disappointing loss at Baylor, then perhaps with Iowa State’s best performance of the season to date, the Cyclones might have a shot.

If it is anything else, then Iowa State could be in for yet another long Saturday of football.

…An offense that we have yet to see in 2013 appears and the defense can mimic what it did against a very average group of Horned Frogs a week ago.

Expect more of that two-quarterback rotation between Grant Rohach and Sam Richardson. Paul Rhoads was fairly up front with the media about this earlier in the week.

“I think we have been noticing improvement from the offensive line since Tulsa,” said Rhoads. “I really do. As hodge-podged as they have been together, I really think that they have been improving. Jacob (Gannon) came in the second series and played the rest of the game with zero issues with his knee. That helps and will help in the next three games.”

The only starter Iowa State should (unless something else has happened over the last few days) be without on Saturday is Daniel Burton, who suffered a “setback” this week in practice (in trying to recover from an ankle injury suffered vs. Kansas State) and won’t be able to go.

Quarterback rotation – A quick editorial on Iowa State’s quarterback situation: It’s fairly clear to me that Sam Richardson is the preferred man right now but this thumb injury is probably worse than Rhoads is leading on. How will he opt to use his quarterbacks on Saturday? Both men will play, but how much? Will Richardson even throw a pass?

DeVondrick Nealy – The sophomore is putting together quite the second half of the season. He’s scored touchdowns in four straight games, including a 98-yard kickoff return last week against TCU.

“He is becoming more explosive in accomplishing that,” Rhoads said. “He has continued to work hard all of the way through.”

I say, give Nealy the football some more on Saturday. Let’s really see what he can do heading into 2014.

Rodney Coe – Here’s a real positive as the season’s conclusion nears. It took Rodney Coe a half-season to really understand the art of playing defensive tackle, but the junior has this thing figured out and was hardly blockable vs. TCU.

“It is the best game that he has played and at the same time, he is stringing them together right now,” Rhoads said. “I think he has played in the last four games, three of out the four he has played pretty good football. Not necessarily off-schedule for a first year junior college player that just arrived in the summertime and got his first practices in August. It is pleasing to see Rodney on schedule and playing as good as he is right now.”

Nobody reading this should be expecting me to take Iowa State to win this game so let’s put the number of 24 points out there to pick against.

Oklahoma has lost four of its last five games when going against the spread. Scoring a ton of points and blowing folks out isn’t exactly what this team is known for. Having said that, I could have written the same thing about Kansas State two weeks ago too and we all know how that turned out.

I don’t see Iowa State winning. I don’t see this being close. But I also am not buying into the “Oklahoma is going to be angry” concept leading up to this game either. If anything, I see Oklahoma being a little bit sluggish from the start.

I see Iowa State keeping it somewhat respectable, but never really being a threat to surprise people on Saturday afternoon in Norman.