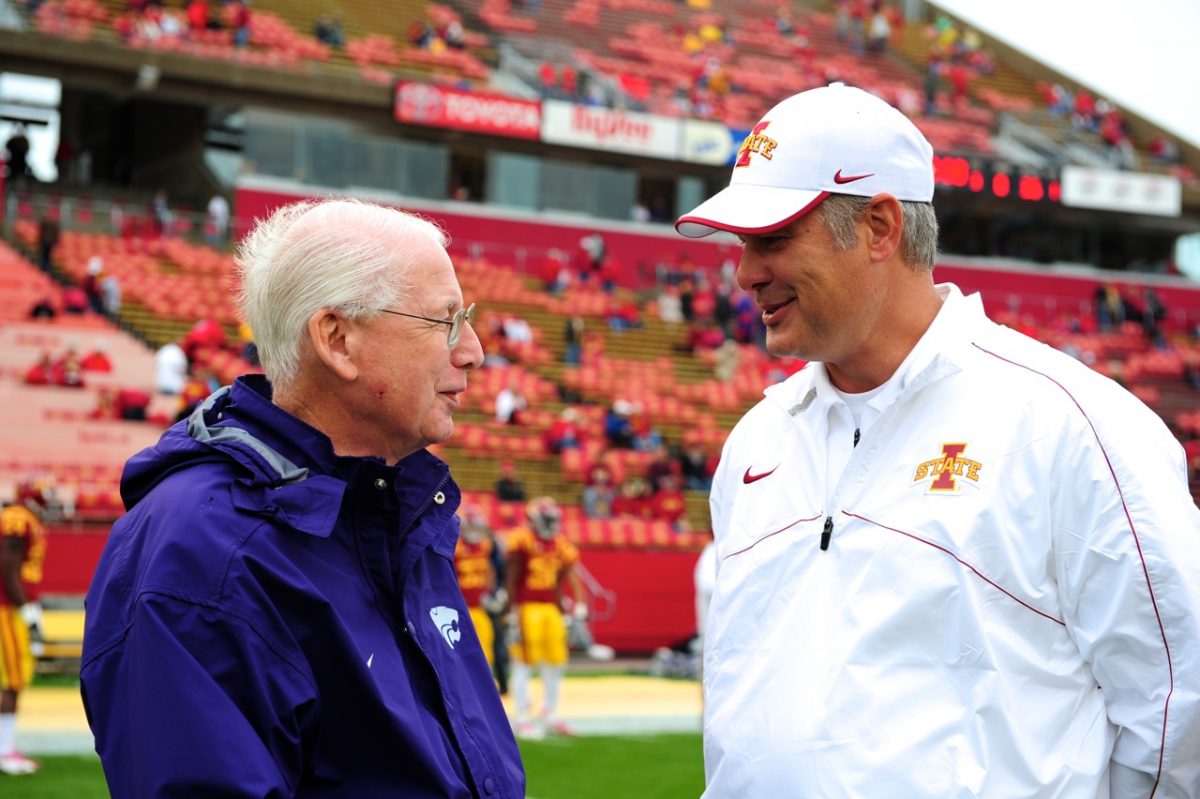 Before the season began, I picked this to be Paul Rhoads’ annual “upset special” within Iowa State’s 2013 campaign. At the time, I didn’t figure it would be that big of an upset either. I saw both of these programs being in the bottom half of the Big 12 with Vegas labeling the defending champion Wildcats as maybe a touchdown favorite, being as the game is being played in the “Little Apple.”

If you’re seeking a major Iowa State upset, Rhoads and his battered Iowa State roster have an opportunity to accomplish just that this weekend. If the Cyclones, who enter Saturday as a 17-point underdog, pull this one off, it would be an “upset special” indeed for no reason other than how depleted this Iowa State roster currently sits with five games remaining on the schedule.

Minus playmakers like Aaron Wimberly and Jarvis West on offense, with questions looming regarding a guy like Luke Knott on defense (not to mention the others on both sides of the ball), winning a Big 12 road game against a team coached by Bill Snyder is an unenviable task for Iowa State at this point in time.

But Rhoads has pulled off a feat like this before. Nebraska in 2009 is the obvious comparison. Iowa State went into Lincoln without its starting quarterback and running back (Austen Arnaud and Alexander Robinson) to name a few and somehow won at Nebraska for the first time in decades.

But is this Iowa State team that currently sits at 0-4 in the Big 12 up to this tall of a task, this late in the season? Have the Cyclones cashed it in or are they game for the final five games of the 2013 season?

The Wildcats will win if…

…Word coming out of Manhattan is legitimate and not just Kool-Aid chatter. You see down yonder, Kansas State fans and media alike seem to believe that something “clicked” for this team in last week’s 35-12 win over a vanilla West Virginia program The Wildcats notably outscored the Mountaineers 28-3 in the second half.

But what if that “clicking” noise was just a few plays coming together against a bad West Virginia team? Keep in mind that the Wildcats’ three wins have come against LA-Lafayette, UMass and Dana Holgerson – not exactly the blue bloods of college football.

However if you dig deeper into Kansas State’s 2013 campaign, you see a lot of “close but no cigar” type games within the Big 12. A narrow 10-point loss to Baylor on Oct. 12 should stand out to anybody who has watched a snap of football this season. The Wildcats are the only team that has held Art Briles’ boys to under 59 this season. Elsewhere, Kansas State lost by four at Oklahoma State and 10 at Texas. Those were some fine efforts against good football teams.

So maybe things did “click” in the second half for Kansas State last week. During that span, quarterback Jake Waters looked as good as he has all season long in route to a 10-for-13, 198 yards and three touchdown performance.

Meanwhile, Kansas State’s defense held West Virginia to only 103 yards on the ground. There is reason to believe that this is a team trending up right now and if that proves to be the case, Iowa State could be in for a long afternoon in the Sunflower State.

…Well, there are a few things that have to happen.

First and foremost, Iowa State has to be able to stop the run. Iowa State’s 111th ranked rush defense has given up an average of 295 yards per game on the ground in its last three outings.

“We aren’t doing the right things to be a good tackling football team the last couple of games. Angles. Vision. Knee bend,” Paul Rhoads said earlier this week. “I can’t stand poor fundamentals when it comes to anything defensively and tackling is at the top of the list.”

In order for Iowa State to pull of this upset, that is where it has to start. If Bill Snyder’s offense is able to run the ball at will, Iowa State might not possess the football for 20 minutes in this game if its offense plays the way it has for the majority of the season. Quarterback Daniel Sams (he rotates with Waters) and running back John Hubert would both be excellent fantasy football plays this week against the Cyclones.

This is one reason why Iowa State does indeed have a puncher’s chance on Saturday. With Kansas State comes a drop in talent level (this is Bill Snyder’s worst team in the last three years without question) and also, a different scheme. It’s a scheme that in the past, Iowa State has matched up well with defensively. That was with two NFL linebackers though. I have my doubts if that will again be the case this weekend.

We will learn one thing about Iowa State in this one. We will learn if the last four weeks have simply been the other teams being a lot better than the Cyclones and in addition to that, awful match-ups. Or, we will learn that it has been a personnel gap between Iowa State and the rest of the Big 12.

Kansas State is a solid program. Heck, they won the Big 12 last year. But this is a team that like Iowa State, lost to an FCS opponent in week one. The Wildcats should not be able to do to Iowa State like others have done over the last three weeks.

Will Luke Knott play? Any additional injuries? – After last week’s loss, it sounded like Knott would be back for Kansas State. Paul Rhoads’ tone changed mid-week. Will No. 21 take the field for the Cyclones is a major question heading into Saturday.

It’s been a weird season for Iowa State on the injury front. There have been a lot of them but most importantly, Rhoads and his staff have done a magnificent job of hiding them. Other than the ones we already know about, will anybody else miss time on Saturday?

Quenton Bundrage – The sophomore wide receiver currently has six touchdown receptions on the year. He only needs three more to tie Iowa State’s school record in that category. Rhoads has been vocal about his team needing to get Bundrage the ball more. Perhaps that will be the case this weekend.

Young talent – With Aaron Wimbelry being out, is this the week that we will get to see even more of what sophomore running back DeVondrick Nealy is made of? Will a young wide receiver help fill the void of Jarvis West’s absence? Iowa State is 1-6 and at this point, it is time to start building for the future. The emergence of young playmakers would be a good thing for the fan base at this point in time.

While I’m not buying into the “Kansas State is back” theory at all, I also do believe that Bill Snyder’s program is better than its 3-4 record indicates.

You want some positives for Iowa State?

For the first time this season, the Cyclones will start the same offensive line combination in back-to-back games. That’s a plus.

Also, while Bill Snyder is 4-0 against Paul Rhoads, the Wildcats have never beaten Iowa State by more than seven points. History shows us that these games have always been close. This is why I picked Iowa State to upset the Wildcats back in July. I figured that Rhoads was due to beat one of the men in the coaching business that he admires the most.

But too much has happened in Ames over the last month for me to predict a Cyclone victory here. I see this being a lot like last week to be honest, minus the catastrophic first quarter. I think that Rhoads’ team will come out of the gates well. An Iowa State lead in the second quarter wouldn’t shock me.

Much like what happened for both teams last week, I see Kansas State pulling away in the second half and handing Iowa State its fifth straight loss. 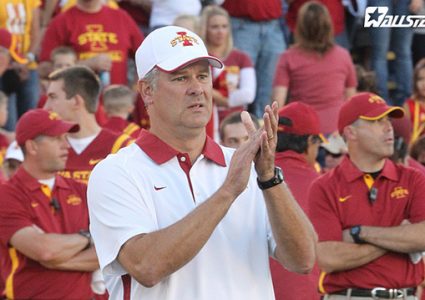